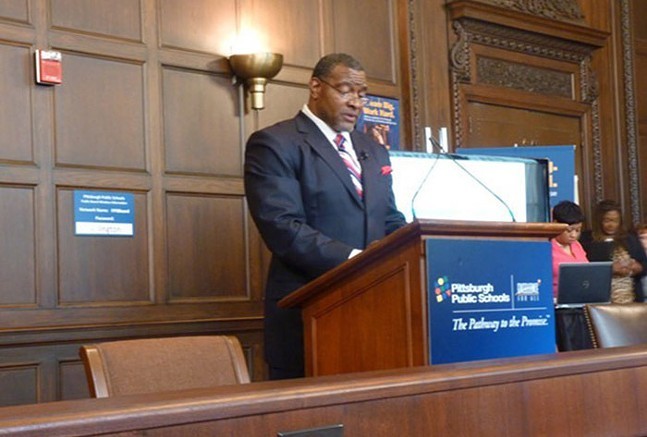 Hamlet has come under increased scrutiny after a Pennsylvania State Ethics Commission report released on Aug. 26 found that he violated ethics rules.

Weiss read a statement from the PPS board that read in part that “The board and Dr. Hamlet believes this is in the best interest of the community” and the board “remains steadfast in the belief that this outcome is unfortunate but necessary.”

That state ethics report found that Hamlet negligently received travel reimbursements and payments for appearances related to his job, and incorrectly filed financial documents. According to the ethics commission, Hamlet utilized leave for days when he was absent for non-district-related travel and carried over unused vacation and personal days for certain district employees, including himself, despite his contract prohibiting it.

The commission also found that a technical violation of the Ethics Act occurred when Hamlet accepted honoraria in recognition of appearances, speeches, or presentations directly related to his role as superintendent. David Berardinelli, the attorney who represented Hamlet in the Ethics Commission Inquiry, noted in August that Hamlet’s contract allowed him to receive such honoraria, which he says is why the commission labeled Hamlet’s actions as a “technical” violation.

Some parents and leaders called for Hamlet’s firing earlier this year. A political action committee group called Black Women for a Better Education formed this year to support school board candidates who opposed Hamlet. And in August, after the ethics report was released, Pittsburgh city controller Michael Lamb called for a change in leadership at the school district.

Helmet’s resignation comes even as many PPS board members supported Hamlet. In August, Wilson said in a statement that a change in leadership at the school district would not make sense due to existing challenges due to the pandemic.

Weiss said that Hamlet is eligible for a severance payment of more than $399,000.
© 2021 Pittsburgh City Paper