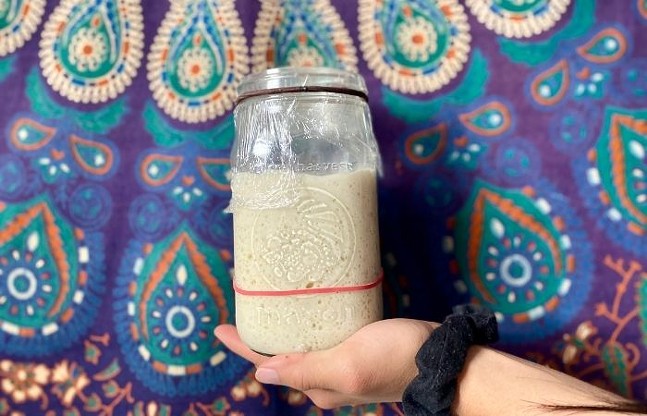 Photo: Courtesy of Theresa Tran
Doughfelia, named for Ofelia in Pan's Labyrinth, in her mason jar
In late March and early April 2020, bread was everywhere on social media. Every few posts, someone would show off a focaccia or boule fresh out of the oven, often decorated with herbs or vegetables or seeds. Many people weren’t sure what to do with the extra time created by quarantines and canceled events and social plans caused by the COVID-19 pandemic, and baking bread seemed to fill in the gaps.

While the notoriously time-intensive activity became an early quarantine hobby, supply couldn’t keep up with the increased demand. Flour shortages made national headlines, but another key ingredient for most bread also experienced early-COVID scarcity: yeast.

Some opted for other ways to spend time — binge-watching increased by 25% on Hulu in late March 2020 — but others turned to homegrown yeast, more commonly known as sourdough starters.

“My friends and I joke about these are just, like, yeast farts that we're eating,” says Haley Ingersoll, who received her starter from a family friend in June 2020. “But yeah, I like knowing that these little microorganisms, I'm taking care of them. They're subsisting because I feed them, and vice versa. So it's kind of a mutual-ism there.”

Ingersoll, a research assistant working remotely for Columbia University and living in the Pittsburgh area, enjoyed baking before, but maintaining her sourdough starter, which she named Howie, required a steep learning curve. Sourdough starters begin as equal parts flour and water that provide food for wild yeasts and lactic acid bacteria in the flour, air, and other surroundings. As the microorganisms feed, they produce alcohol and lactic acid that create the distinct spongy texture and sour taste of sourdough bread.

Jack Busch, a tech writer at Bechtel Plant Machinery in Monroeville, became interested in sourdough starters long before the pandemic. After reading Michael Pollan’s Cooked: A Natural History of Transformation, he created Oscar (the name he gave his starter) from scratch in May 2016 in a Star Wars popcorn bucket. Oscar, named for Sesame Street’s Oscar the Grouch since they both live in buckets, perished at some point in 2016, after which Busch ordered Carl 1.0 from Friends of Carl, which distributes dehydrated sourdough starters that supposedly date back to 1847.

Photo: Courtesy of Jack Busch
Oscar, named for Oscar the Grouch, in his Star Wars bucket
Killing a sourdough starter is as easy as doing nothing, which is what happened to Carl 1.0 as well. Like any living thing, starters need food to survive, and to feed them, starter caretakers must remove half of the starter and replace it with flour and water. But once the starter eats through the starches available, it will begin to ferment into hooch. If left alone without food for too long, it will starve to death. Starters also can die when exposed to too much heat.

Sourdough starters are tenacious, though, and starters can survive by splitting and sharing them with others who keep them alive even if the original is killed or left to starve. Busch ordered Carl 2.0 in late 2020 and shared the starter with a friend, who later shared Carl 2.0 back to Busch after Busch let his iteration of Carl 2.0 starve.

Back in 2016, Busch wrote to a friend, concerning Oscar, “You can divide him but you cannot diminish him, at least not permanently. He is many, but he is one. The great paradox of his existence.”

Like Ingersoll, Theresa Tran, a newly certified occupational therapist, received her starter in this paradoxical way. Instead of a family friend, however, Tran got her starter from a Buy Nothing Facebook group in October 2020 after wanting to make pizza and first having trouble finding pizza dough, then having trouble finding yeast. While it was slightly after the height of the bread baking fad, Tran had more time on her hands after her clinical was delayed for her program due to COVID, which gave her time to invest in a new hobby. Tran recently moved away from Pittsburgh, but lived in the city for the last three years. Her starter is a born-and-bred yinzer.

“I was, like, well, I'm not doing much right now. May as well see what this whole sourdough thing's about,” says Tran, who has tentatively named her starter Doughfelia after Ofelia, the protagonist in Pan’s Labyrinth, one of Tran’s favorite movies.

These days, Ingersoll, Busch, and Tran only cook with their starters every few weeks, so they keep their starters in the refrigerator, which slows the fermentation process and allows them to feed their starters less frequently — closer to every week rather than every day.

Busch primarily uses Carl 2.0 to make sourdough bread, but starters are versatile and can be used in a variety of recipes. Ingersoll’s first recipe with Howie was bagels, which she admits was “really ambitious. But I was just, like, everything bagels sound really dope. And we have everything bagel seasoning.”

Ingersoll also makes waffles and cookies with Howie’s discard, in addition to several loaves per baking session. Tran eventually made her pizza dough, although she was slightly underwhelmed by the difference between sourdough pizza dough and normal pizza dough.

Photo: Courtesy of Haley Ingersoll
Howie in his baked and unbaked form
“It's nothing to write home about. I know that there are a couple pizza places that use sourdough as their base, so I feel like it tastes the same. Maybe I'm doing it wrong,” says Tran, who also makes focaccia, challah, and ravioli with Doughfelia.

In addition to versatility, the bakers also found that the starters allowed for a surprisingly amount of flexibility during the caretaking and baking processes. Ingersoll eyeballs the amount of flour and water she feeds Howie, and Busch has found that there’s more wiggle room than expected in the feeding process.

“In a lot of the books you read, they kind of stress having to measure things out and doing things on the schedule and kind of being scientific about it,” Busch says. “But I found that it's pretty forgiving. Even if you miss a couple days or, you know, kind of mess things up, it's able to recover in most cases.”

For all three bakers, the time commitment was one of the biggest adjustments in becoming a sourdough starter caretaker. In addition to the necessary time for proving and folding the dough, feeding schedules require being home at least once a week — or, in Ingersoll’s case, finding a sourdough starter babysitter. While the discipline and scheduling can be difficult, Busch enjoys the sense of purpose that Carl 2.0 gives him and says, “I like knowing that I have something fermenting in the background.”

The emotional connection to the starter can also affect caretakers. Tran plans to dehydrate her starter when she no longer uses it regularly so that she can pick it back up someday. Dehydrated starters can survive indefinitely if kept in proper conditions.

“There have been times where I'm just, like, ugh, I don't want to feed my starter. Like, it doesn't take a lot of work. It takes five minutes at the most, but you get busy, or you forget. And then I'm, like, 'What if I just let it go?' But I feel I would just feel bad. I've had it for so long,” Tran says.

The three bakers likened their starters to pets, since they have to remember to feed and care for their starters. While Busch and Tran have animal pets in addition to their micro-organism starters — Busch has a fish named Charlie and Tran has a dog named Ruffles — Ingersoll’s starter is her only pet other than her plants since “our landlord doesn't allow dogs.”

Photo: Courtesy of Theresa Tran
Doughfelia and Theresa Tran's pet dog, Ruffles
In addition to the emotional connection with the starter itself, the starters also fostered connections with other sourdough starter enthusiasts. Tran would chat with her former supervisor, who also maintains a sourdough starter, and Ingersoll has kept in touch with the family friend who gave her Howie.

“It's been a really fun source of camaraderie with him, too. So every time I make a loaf, I send him a picture and he'll be, like, 'What does the crumb look like on that?' … But yeah, it's been a great way for us to kind of keep in touch. And to this day, he still will email me recipes,” says Ingersoll.

Busch also bonded with the friend with whom he shared Carl 2.0. While he and Tran have not bonded with anyone via online sourdough starter groups, both have spent time in those spaces. Busch also told his friend about the online communities, including their penchant for calling a picture of a sliced bread loaf a “crumb shot.”

“Just have fun with it. Talk to other people that do it if you know of it. Otherwise there's lots of people in the sourdough community online or blogging about it to kind of walk you through,” Ingersoll says. “But yeah, no pressure if it doesn't work out. [You] just can try again.”
© 2022 Pittsburgh City Paper