BEWARE: Cars are illegally parked on Pittsburgh sidewalks and we are so numb to it, we don’t even care anymore | Pittsburgh City Paper

Photo: Scott Bricker
Vehicles on the parking lot in Pittsburgh's Overbrook neighborhood in 2018
Starting in early July, Pittsburgh started to see Spin e-scooters zipping around on the streets thanks to a new pilot program authorized by the state government. Electric scooter share has had plenty of critics in other U.S. cities, and Pittsburgh was not immune to similar criticism, as several people on social media complained about the scooters’ safety, parking, etc.

Eventually, local TV news got a hold of that energy and filed stories about the menaces that were scooters left on the sidewalk, which is against state law. According to WPXI, “a number of people” tweeted photos of illegally parked scooters on to Pittsburgh’s 311 account, and some residents complained the scooters were “everywhere.”

Riding or parking e-scooters on the sidewalk is against the law, and Spin has the ability to track scooters that are left on sidewalks and dole out penalties to scofflaws and eventually ban people with too many infractions. Parking e-scooters illegally is a serious problem that can block access for pedestrians, wheelchair users, and others.

However, I can’t help but judge the news coverage and social media complaints against an arguably much bigger infraction that many Pittsburghers seem to have no problem with: vehicles parked on the sidewalks.

So, I solicited photos of cars parked on Pittsburgh sidewalks on Twitter and dozens of photos came pouring in. (Parking cars partially or fully on the sidewalk is illegal, just like with scooters.) Photos sent to me of cars and trucks parked on sidewalks spanned just about every Pittsburgh neighborhood. Some people commented that the problem is so pervasive that they stopped taking photos of the infractions. I even found two cars parked partially on the sidewalk on my own street in Bloomfield when I walked outside on the evening of Wed., Aug. 11. 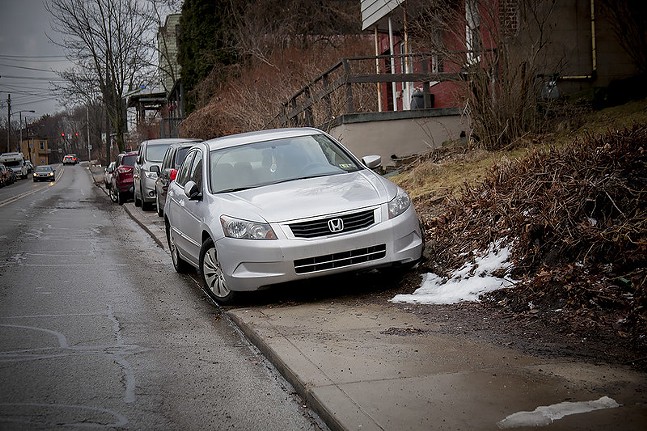 Photo: Scott Bricker
Cars parked on the sidewalk in Polish Hill in 2018
According to a 2017 story in The Incline, enforcement against vehicles parked on sidewalks has been lax. Where enforcement does occur, the “highest totals were seen Downtown, in the South Side, the Strip District and Oakland. Comparable totals were also seen in the North Side and Lawrenceville.” Parking on the sidewalk can result in a ticket, but charges can be more severe if a plaintiff was injured while walking along the sidewalk near the parked vehicle.

Some Pittsburgh streets are very narrow, and I understand the desire, maybe even necessity, of many Pittsburghers to sidewalk park in order to protect their vehicles from damage. However, that desire might be less about how wide the streets are, and instead the fault of trucks and SUVs that are being made larger and larger, something that we, as drivers and consumers, are supporting in making these the top-selling vehicles in the U.S. Also, plenty of sidewalk parking is done on very wide streets in the city.

Here is just a small sample of some of the worst examples of vehicles parked on Pittsburgh sidewalks, an issue that is undoubtedly worse than a few stray scooters, but one problem most residents, law enforcement, and politicians seem resigned to just accept at this point.

A car parked on the Denny Street in Lawrenceville, blocking an entire corner and obscuring the path of anyone trying to use the ramp.


🎉👏👏👏😁I feel like the hoarder who just found out there's actually a use for that box full of takeout forks. How many am I allowed to post? pic.twitter.com/KqkUuPdO0B


This is one of my favorite photos in this genre. pic.twitter.com/2n9QzUZKpS


Along west liberty, southbound in dealership row. There are a handful of auto repair places that use the sidewalk as their parking lot, along with Martin’s auto further up on the Inbound side. pic.twitter.com/EcGeGGGkX6


On sidewalks in seemingly wide and mostly empty streets in Squirrel Hill.


Two just now, on Negley near Northumberland in SqHill. pic.twitter.com/XRgcIHrYM7


Bike lanes are not immune to parked cars either, these in Downtown.


A driver owning up for his past sins on Mount Washington.


I'll admit that when I lived in Southside Slopes I was sometimes a sidewalk parker. I even got caught by Google Maps pic.twitter.com/U4X6OWwNG4


A wheelchair user shares photo of cars parked on a sidewalk on Boulevard of the Allies.


Going past a bunch in my wheelchair. pic.twitter.com/riqu6VQIl8


A two-fer in Central Lawrenceville. Cars parked on sidewalks on both sides of street.


A postal truck parked fully on a sidewalk in the North Side.


Note that the driver was not wearing a postal uniform or delivering packages. I asked her to move so I could push a stroller through, and she said “I don’t want to park in the street because I don’t want to get hit.” pic.twitter.com/UBWMHq7Vho


A sidewalk is blocked in Morningside.


On 40th Street in Lawrenceville, cars are parked and obstructing the sidewalk and the bike lane. This has occurred for the last several Sundays.


This is not my photo, it is from Nextdoor. Let me know if you want me to connect you with the photo-taker for permission. 40th and Davison. pic.twitter.com/b8U2b5PUg1


An Oakland van taking up an entire sidewalk.


Yes, even police officers park their vehicles on the sidewalks.


Even the cops park in the sidewalk pic.twitter.com/KLQx4LEode