Lamb’s candidacy has been hinted at for months, and now joins a field of several other Democratic candidates, including Montgomery County Commissioner Val Arkoosh, Philadelphia state Rep. Malcolm Kenyatta, and Lt. Gov. John Fetterman (D-Braddock). CNN currently ranks the Pennsylvania Senate seat as the most likely to flip from Republican hands to Democratic control. U.S. Sen. Pat Toomey (R-Lehigh) currently holds the seat, but has announced he will retire at the end of this term.

In a speech out in the midday sun in front of IBEW hall, Lamb spoke about his background growing up in the Pittsburgh area and attending Central Catholic High School, serving in the Marines, and eventually being elected to Congress and serving Pennsylvania’s 17th Congressional District, which comprises of Allegheny County’s northern, southern, and western suburbs, as well as Beaver County. Lamb lauded the work of labor unions in helping him get elected.

“I wouldn’t be a member of Congress without the unions,” said Lamb.

In his speech, he framed Pittsburgh as a cradle of democracy because of its history in the American labor movement, and referenced labor movements like the Battle of Homestead, where people lost their lives in order to fight for more workers’ rights during the Industrial Revolution.

“People shed blood for the rights of union and non-union workers,” said Lamb.

Lamb’s most prominent supporter, Allegheny County Executive Rich Fitzgerald, introduced the congressman and said Lamb was a candidate who can win the primary and the general election. Fitzgerald said that if Lamb were elected Senator, he would be a strong partner to Allegheny County.

In front of a crowd of about 100, Lamb highlighted the strides that have been made with Democrats in charge, while acknowledging that there was still work to do in terms of tackling health and economic disparaties in Pennsylvania's Black and Brown communities. He criticized Republican leaders like U.S. Sen. Mitch McConnell (R-Ky.) from trying to halt that progress. He said the Republican leaders have been consumed by the “Big Lie” that has some people falsely believing that former President Donald Trump won the 2020 election. 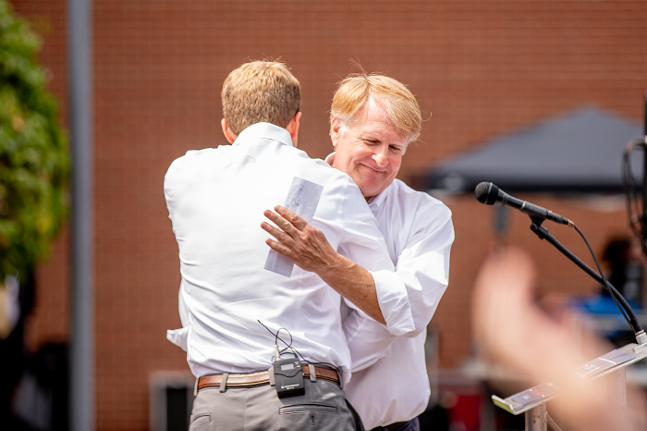 CP photo: Kaycee Orwig
Conor Lamb hugs Rich Fitzgerald
“They are lying about the last election,” said Lamb. “If they will take a big lie and put it at the center of their party, they cannot be trusted about anything else.”

Lamb, a moderate Democrat, has rankled progressives over votes regarding immigration, marijuana, and tax policy, as well as his strong support for natural-gas drilling, aka fracking. But he also has many differences with politicians like U.S. Sens. Joe Manchin (D-W.V.) and Kirsten Simena (D-Ariz.), two well-known moderate Democrats currently in the Senate.

Lamb supports a $15 minimum wage, ending the filibuster, and environmental remediation policies that President Joe Biden backs. He is a staunch ally of Biden, who has campaigned with Lamb many times over his young political career.

He was first elected in a special election in 2018, to replace former U.S. Rep. Tim Murphy (R-Upper St. Clair), who resigned after a cheating scandal. Pennsylvania’s former 18th Congressional District was a deep red district that former President Donald Trump carried by about 20 points. Lamb’s victory over former state. Rep. Rick Saccone (R-Elizabeth) was one of the Democrat party's most impressive victories of the 2018 election cycle.

In 2020, Lamb narrowly defeated Republican candidate Sean Parnell to secure re-election in the state’s 17th Congressional District. However, with redistricting coming this year and Pennsylvania set to lose one of its congressional districts, it has been widely predicted that the 17th District will become more conservative, and possibly be eliminated altogether.

Despite a crowded field, Lamb didn’t showcase any direct criticism of other Democratic candidates. He mentioned his campaign won’t be focused on tweets and slogans, but saved most of his scorn for conservatives, calling out those who supported or took part in the Jan. 6 insurrection on the U.S. Capitol.

He said that leaders must first fight against proponents of the “Big Lie” and the insurrection in the normal channels like through the courts, but that second, that fight continues by winning the U.S. Senate race.

“We work as if Democracy is on the line because it is,” said Lamb.
© 2023 Pittsburgh City Paper