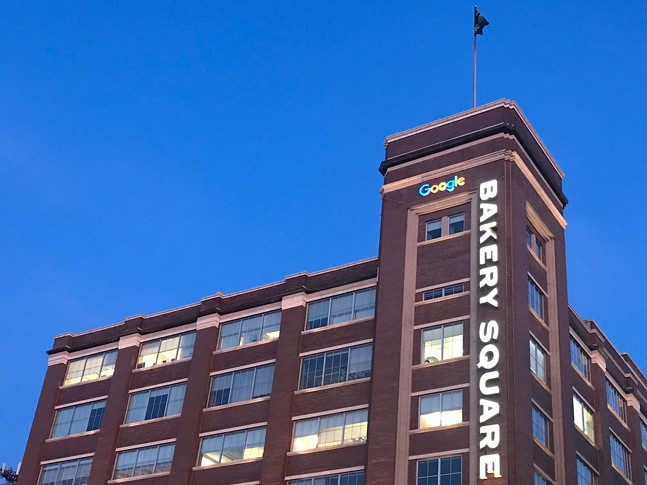 CP photo: Ryan Deto
Google offices in Pittsburgh's Larimer neighborhood
After voting to join The United Steelworkers union in 2019, tech workers at a Google contractor in Bakery Square ratified their first ever contract with HCL America, Inc. The three-year contract protects about 65 Pittsburgh-based workers. HCL is an independent contractor company that hires tech workers who complete work for Google, who has offices in Pittsburgh's Larimer neighborhood.

“After close to two years of hard work, patience and solidarity from our members at HCL, we are proud of what we achieved in this agreement,” United Steelworkers International President Tom Conway said in a press release. “More than ever, our struggle with HCL shows that all workers deserve the protections and benefits of a union contract.”

On September 24, 2019, HCL contractor employees voted 49-24 to unionize. However, they faced complications with HCL, who took action to avoid their workers joining USW before the election took place.

USW said in a press release that HCL, “coerced employees into mandatory meetings aimed at defeating the workers' campaign to organize a union and bargain collectively for better, more secure jobs at Google's Bakery Square offices."

The press release also condemned HCL for enlisting anti-union consulting firm Vantage Point Alliance. The firm gained attention when they defeated union efforts at a glass factory in Ohio in 2018.

“After ignoring our concerns, HCL tried to prevent us from forming a union, and when it failed, the company dragged out the negotiating process while sending our jobs overseas in retaliation,” member of the bargaining committee at USW and worker at HCL Amanda Parks said. “Now, with a strong union and contract in place, we’re confident that our voices will be heard.”

Last week, the tech workers and HCL reached a tentative agreement, and HCL issued a statement to The Verge saying: “Throughout this process, HCL has been actively engaged in meaningful and fair discussions with the USW in good faith. We have been steadfast in our commitment to respect our employees’ right to pursue unionization should they choose to do so.”