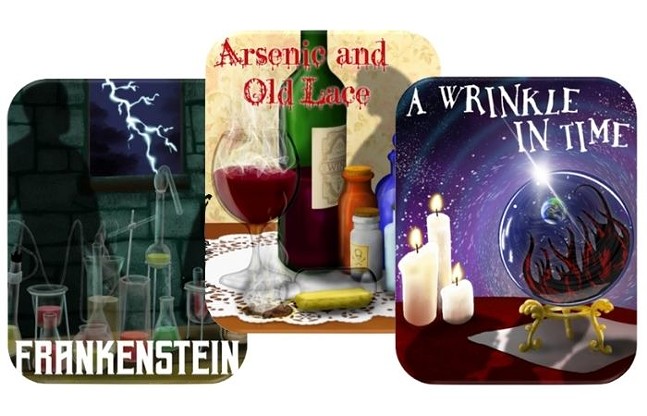 John Michnya Illustrations
Fliers for the first three productions in Prime Stage Theatre's 25th season
Prime Stage Theatre went beyond traditional theater during the pandemic, featuring one-actor plays live-streamed from as far away as Rwanda and South Africa. For its 25th anniversary season, the Pittsburgh theater company will go Beyond the Imagination as it returns to New Hazlett Theater in the North Side.

It’s difficult to comprehend what might lie beyond the imagination, but Prime Stage Theatre is setting off in search of it with productions of Frankenstein, A Wrinkle in Time, and Arsenic and Old Lace, as well as the introduction of Prime Stage Sprouts, a new series aimed at elementary school-aged children and their families.

“It has been a challenging year and a half for the arts and we are so excited to make our way back into the theater,” says Prime Stage Theatre managing editor Tina Marie Cerny. “This season we are returning to the stage with shows to stretch your imagination. Spine tingling intrigue, a mystery with voyages to unknown worlds, and some sweet but misguided aunts are all on stage this season.”

Lawrence C. Connolly’s production of Frankenstein takes a meta step back from the novel, following author Mary Shelley as she creates a story about humanity and monstrosity. A science-fiction and horror writer, Connolly is a Pittsburgh native whose work has appeared in Amazing Stories and Rod Serling's Twilight Zone. The world premiere of his take on the classic Gothic tale will run Nov. 5-14.

The second production jumps forward in time with an adaptation of Madeleine L’Engle’s A Wrinkle in Time by Brian Wongchaowart and Wayne Brinda. The show will run March 4-13, 2022. Under director Sunny Disney, the play is a celebration of the 60th anniversary of the book, which follows three children’s fantastical journey that weaves together religion, science, and magic.

Joseph Kesselring’s Arsenic and Old Lace will run May 6-15, 2022. Directed by Liam Macik, the show is a black comedy about homicidal descendants of the Mayflower settlers. The show debuted on Broadway in 1941 as a respite from the gravity of World War II, and when it runs in 2022 in Pittsburgh, it may offer some respite more than two years after the start of a global pandemic.

The final show of the season will be a regional premiere of The Amazing Lemonade Girl as part of the new Prime Stage Sprouts program. The true story by James DeVita was inspired by Alexandra Flynn Scott, whose rare childhood illness led her to start a front yard lemonade stand to raise funds to help other kids. The production, directed by Allison Weakland, will run June 16-19, 2022.

Tickets will go on sale in September.
© 2023 Pittsburgh City Paper