Photo courtesy of Renee Rosensteel and The New Hazlett CSA

John Henry was a legend — and he was also a real person. So contends Scott Reynolds Nelson in his 2006 book Steel Drivin’ Man, which located the 19th-century inspiration for the John Henry folk tale in a former African-American Union soldier who, imprisoned for theft, ended up a convict who was leased out to blast railroad tunnels through the Alleghenies in West Virginia.

Steel Drivin’ Man was a key inspiration for theater artist Anya Martin in conceiving JH: Mechanics of a Legend. The play was devised for her Hiawatha Project by Martin, Monteze Freeland, Kyle Bostian, Tom Driscoll and Delana Flowers; following its compelling work-in-progress debut in 2015, as part of the New Hazlett Theater’s CSA series, it returns in a full-length version for its premiere production, Feb. 9-18 at the August Wilson Center.

The script, unconventionally, is mostly a collage artfully assembled from direct quotes from found sources ranging from slave narratives to modern scholarly studies. John Henry (played by Freeland) and his wife, Polly (Flowers), traverse a landscape of the Reconstruction-era South where what’s being rebuilt is the machine that turned the slavery on which America’s wealth was founded into inmate labor and other forms of exploitation of African Americans. That machine is embodied by the characters of The Engineer and The Mechanic, some of whose dialogue is drawn from the book Science of Mechanics. The plentiful music, composed of excerpts and iterations, all a capella, of the oft-sung folk song “John Henry,” comes courtesy of musical direction by Caroline Wazenegger. The play’s full-length version also features a new character, Lucy (Linda Haston), a later version of Polly who serves as a narrator.

JH also intentionally finds parallels between the racial injustices of John Henry’s time and those of today, when labor camps have been replaced by the prison-industrial complex. Staging the show, she says, “You’re working with a lot of ghosts in the room.”

Remember how proud you used to be of your homemade valentines in elementary school? Relive those moments during MAKEnight (21+): My Snarky Valentine at the Children’s Museum of Pittsburgh. Make a shrinky-dink or a gold-leaf valentine, silkscreen a love note, or decorate an Eat’n Park Smiley cookie during this adults-only event. Think of how much saucier you can make them now that they’re not for your mom. (On second thought, make your mom one too!) Afterward, enjoy a dance lesson and some adult refreshments. Get your tickets now, this event sells out fast. Amani Newton 6:30 p.m. 10 Children’s Way, North Side. $15-20. 412-322-5058 or www.pittsburghkids.org

The Pink Unicorn has been performed all over the U.S. and Canada since its debut in 2013, and it’s easy to see why. The one-person play by Elise Forier Edie focuses on Trish, a widow raising her 14-year-old daughter in a small, conservative Texas town. When the girl announces that she is gender-queer, mom is torn between her love for her child and her fear of nonconforming. Off the Wall Productions will stage four performances this week, starring Amy Landis. A reprise production is planned in May. AN 8 p.m. Continues through Sun., Feb. 12. Carnegie Stage. 25 W. Main St., Carnegie. $25-40. 724-873-3576 or www.insideofthewall.com

Renowned British choreographer Derek Deane’s Alice in Wonderland world-premiered in London, in 1995, and made its North American premiere in 2008, courtesy of Pittsburgh Ballet Theatre. The PBT reprises the show starting tonight, with 10 performances over a rare two-weekend Benedum Center run. Set to a medley of Tchaikovsky works, this Alice — full of favorite scenes and characters, from Mad Hatter to Red Queen —is acclaimed for both its rich dancing and its wild costuming and set design, which honor both Lewis Carroll and John Tenniel’s iconic original illustrations. BO 8 p.m. Continues through Feb. 19. 237 Seventh St., Downtown. $28-108. 412-456-6666 or www.pbt.org

When it was founded in 1934, The Bach Choir of Pittsburgh intended, fittingly, to perform the work of Johann Sebastian Bach exclusively. However, tonight and tomorrow, at Downtown’s First Presbyterian Church, the choir will touch audiences with a rare performance of Randall Thompson’s Requiem. Thompson, an American composer, wrote his masterpiece in response to the loss of close friends. Composed for double-chorus a cappella, it takes the form of a dramatic dialogue between two choirs, a “chorus of mourners” and a “chorus of the faithful,” employing an extensive selection of Biblical verses to map the despondence of grief and the promise of eternal life. AN 8 p.m. Also 4 p.m. Sun., Feb. 12. 320 Sixth St., Downtown. $12-27. 412-241-4044 or www.bachchoirpittsburgh.org

Chris Grabenstein went from acting in an improv troupe alongside Bruce Willis to writing award-winning novels for the middle-school crowd. Today he’ll read from his New York Times bestselling books The Island of Dr. Libris and the Mr. Lemoncello series, as part of the Words & Pictures talks presented by Pittsburgh Arts & Lectures. Bring your kids even if they haven’t read the books yet — Grabenstein’s presentations are buttressed with lessons extracted from his acting days. The golden rules of improv, which prioritize openness, can communicate valuable lessons about not focusing on perfection. AN 2:30 p.m. Carnegie Library Lecture Hall. 4400 Forbes Ave., Oakland. $11. 412-622-8866 or www.pittsburghlectures.org

Take the choreography, acrobatics, physical comedy and visual effects of Cirque du Soleil, and subtract, well, all the weirdness, and you’ll start to get an idea of Galumpha. The “human jungle gym” from Binghamton, N.Y., starts a mini-tour of Pittsburgh this week, with six performance locations throughout the region. Formed in 2002, the troupe has performed around the world, earning the Edinburgh Festival Critics’ Choice Award and the Moers International Comedy Arts Prize. The family-friendly shows are part of Citizens Bank Children’s Theater Series. AN 7 p.m. (Seneca Valley Senior High School, 128 Seneca School Road, Harmony). Continues through Feb. 19 (various locations). $10.50; kids under 2 free. 412-456-6666 or www.trustarts.org

Taj Express: The Bollywood Musical stops at the Byham Theater for one night only as part of its international tour. The original Indian stage musical was produced, directed and choreographed by Shruti and Vaibhavi Merchant, award-winning sisters who happen to be third-generation Bollywood film choreographers. Follow Vasu, a thief, on board the Taj Express as he works his way through oodles of song and dance sequences, fulfilling his destiny from Mumbai to Agra, home of the Taj Mahal. The show features music composed by A.R. Rahman, who won an Oscar for original song with 2008’s best picture Slumdog Millionaire. AN 7:30 p.m. 101 Sixth St., Downtown. $37.50-57.50. 412-456-6666 or www.trustArts.org 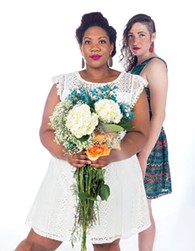 A Love Supreme takes its title from a touchstone work by John Coltrane, but this “journey through love, death and womanhood” ranges beyond even Coltrane’s fusion of bop and free jazz into the realm of classical music. Vocalist and composer Anqwenique Wingfield celebrates the works of such unsung African-American women composers as Florence Price and Dorothy Rudd Moore, adding her own compositions. The evening, part of the New Hazlett Theater’s CSA series, includes video art by Julie Mallis. BO 8 p.m. 6 Allegheny Square East, North Side. $25. 412-320-4610 or www.newhazletttheater.org