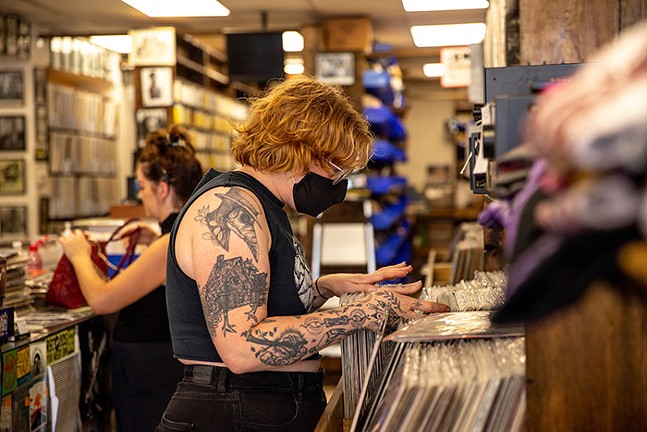 CP Photo: Kaycee Orwig
A customer browses through the selection at Attic Record Store in Millvale.
Pittsburgh is a city full of musical talent and music lovers. Whether you’re looking to watch a local favorite or trying to see a global superstar, it’s easy for music fans to find something to love in the Steel City. Pittsburgh is also a place that loves to support local businesses, and what better way to do that than to visit one of the many record stores in the area. Luckily for music lovers, Pittsburgh artists can also be found among the vinyl collections in many local shops. We put together a guide of some of our favorite music shops in the region, with a few recommendations of local artists to pick up at several locations, to help take you on a tour of the city while adding to your personal collection.

The name of this shop gives you a pretty good idea of what you’ll find inside. The Downtown location is a cute, intimate space, featuring a wide variety of books and records. In addition to selling new albums, they’ll also buy records from you, and have an interest in a slew of categories like heavy metal, post-punk, R&B, and blues.

Attic Record Store is a favorite among Pittsburghers. Home to CDs, records, and turntables, the shop has something for every music fan. It carries music from the ’30s all the way to the 2000s, including hip hop, pop, soul, doo-wop, blues, psychedelia, jazz, indie, and metal. Currently, the best-selling local records at Attic are rapper Moemaw Naedon’s newest album Cult Theatre and punk band Fuck Yeah, Dinosaurs!’ 65 Million Beers Ago. 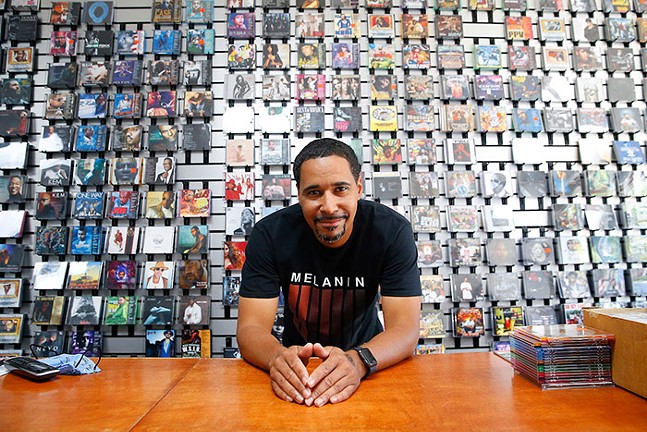 Dorsey’s has been around for decades, and is an integral part of Homewood’s history. It has a variety of underground R&B, jazz, and hip-hop selections. It also provides a selection of soul and gospel CDs, in addition to serving as a place for converting LPs into CDs or VHS into DVDs.

Eide’s provides records, comics, magazines, movies, and more. While primarily known for comics, their collectible record stock is also pretty extensive. They carry many classic favorites like Jimi Hendrix, the Beatles, and KISS, and a good selection of 45s.

Get Hip doubles as a record store and an independent music label and distributor. They have over 20,000 titles to choose from, and we recommend checking out their vast online store. Get Hip launched as a distributor in 1986, but they are dedicated to bringing you the sounds from before the ‘80s. In the shop, which opened in 2017, you can find records from Pittsburgh bands including The Cynics, featuring Get Hips’ co-owner Gregg Kostelich on guitar.

The Government Center is a beloved store on the North Side that carries everything from AC/DC and dvsn to local favorites Come Holy Spirit and Buscrates. You’ve gotta hit up this store in person because, according to their website, they don’t sell records online because they’d “rather talk to people in person because we believe shopping for something as important as music should involve human interaction.” They also occasionally host live shows from local musicians, and just moved into a new location. 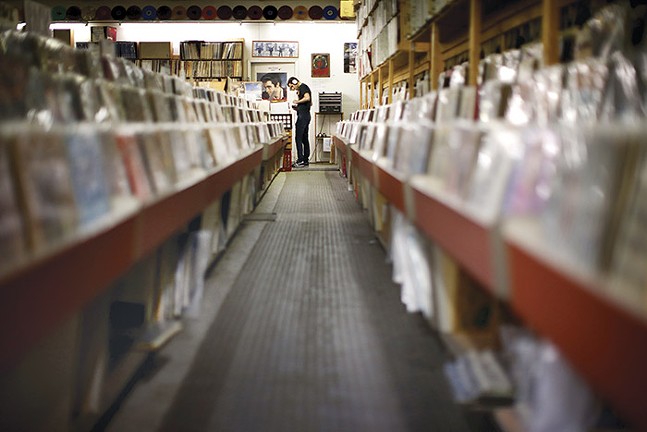 Jerry’s Records was named one of the best record stores in America by Rolling Stone in 2010. The original owner, Jerry Weber, sold the business to employee Chris Grauzer in 2017, but the shop’s still going strong after over 40 years. They have an extensive collection and allow you to buy, sell, and trade records. A favorite among vinyl collectors of all ages, Jerry’s has a whole section of local music including Billy Price, Diamond Reo, and lots more classics.

Pleasant Dreams is a record store specifically dedicated to the punk genre. That’s not all they carry, though. You’ll find movies and the occasional Kate Bush record, too. In this spot, you can find the record Welcome to Pittsburgh … don’t move here, featuring 14 tracks from the Pittsburgh hardcore scene.

Launched by Pittsburgh transplants, this store brings records to the South Hills. In addition to the kinds of records you wouldn’t be surprised to find at a local spot, Vinyl Remains also has the surprising presence of horror movie soundtracks. The space also houses a small art gallery, showcasing prints, shirts, books, and stickers from various artists.
© 2022 Pittsburgh City Paper