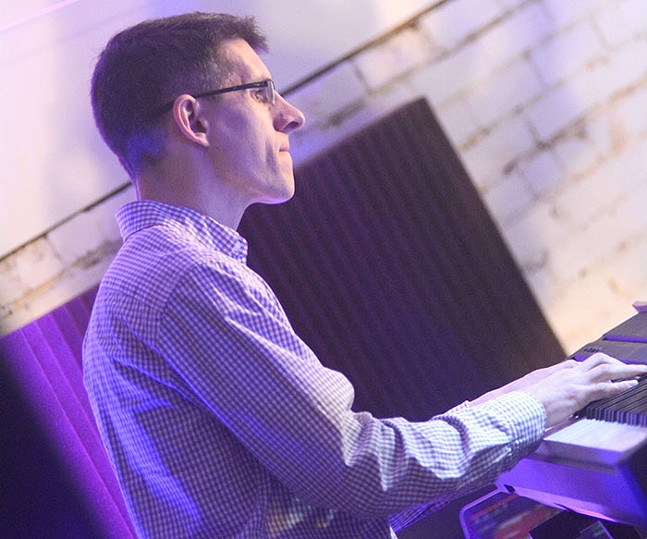 Photo: Mike Canton
Joe Sheehan of Kinetic
I discovered local jazz band Kinetic when they opened for Troy Roberts at the now-closed, fabled James Street Gastropub & Speakeasy in the North Side. The outfit included two musicians from Joy Ike’s group, rising vocalist Anqwenique, and bandleader Joe Sheehan. They were solid, and I made a point of attending Kinetic’s gigs after that. It was the early 2010s.

The band’s first album, World of Wonder, became a regular play on The Soul Show. Next, I had the opportunity to witness the sophomore project’s recording and mixing:

Songs of Lake Volta resulted from Sheehan’s visit to Ghana to study music and culture. His subsequent blending of the nation’s folk music with original compositions earned a spot on my 2018 Top Ten Albums list.

Dances of Lake Volta, releasing Aug. 13, is the 2021 follow-up to Songs. Kinetic veterans like PJ Roduta and Samuel Boateng are in the mix, while Anita Brown Levels and Mariko Reid contribute as vocalists. The credits also include Reggie Watkins, Claude Flowers, Anthony Ambroso, James Johnson III, Roger Romero, and Maya Brown-Boateng. The band has evolved into a collective.

When I looked at Dances’ song list, it was clear that the album includes many reinterpretations of Songs’ tracks. Ambroso’s guitar licks are nicely front and center on the new album, and the horns emerge with punch and texture. One of the brand new pieces, “Another Day,” is a favorite. You will dance.Mike Canton is the longtime host and producer of The Soul Show on WYEP 91.3FM. He recently launched a syndicated edition of the program, now airing in three markets. Both are produced in his Electric Basement Studios. Canton is also a Pittsburgh-area voice artist.
© 2022 Pittsburgh City Paper