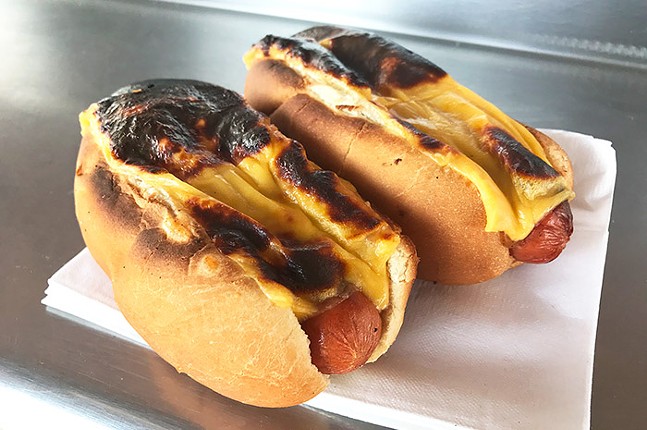 CP Photo: Ryan Deto
Two cheese dogs with the works at Jim’s in West Mifflin.
If a restaurant has been around for nearly 100 years, there is no questioning its success, even if its cooking methods are unorthodox.

That’s the story with Jim’s in West Mifflin. The hot dog joint has been open since 1927, and is also known for Jim’s Famous Sauce, a spicy sweet-sour condiment loaded on its hot dogs. (The name of the restaurant will also show up on internet searches as Jim’s Famous Sauce.) The joint also sells and distributes its famous sauce, with a label claiming its greatness on "hot dogs, steaks, chicken, pasta and more."

But what really makes Jim’s stand out is how it cooks hot dogs: after grilling the wieners and assembling everything together with sauce and chopped onions on a bun, Jim’s throws the whole thing back under the broiler to provide a little extra char. According to Jim’s website, this additional broil helps keep the hot dogs toasty and delicious, even after a trip home.

Eventually, Jim’s figured out the addition of melty cheese to the broiled hot dog led to a browned, blackened creation that satisfied customers. It has become Jim’s most popular item and is what you should order when visiting the Mon Valley staple.

On my visit to Jim’s, I ordered from the window two cheese dogs with the works (melty yellow cheese slices covering a grilled dog loaded with chopped onions and Jim’s Famous Sauce), and then enjoyed them at a small metal counter under an overhang. There are tables and other outdoor seating available, but this is mostly a grab-and-go establishment.

CP Photo: Ryan Deto
Jim’s in West Mifflin
The appearance of the cheese dogs can be a bit deterring. The Velveeta-style cheese gets cooked and forms black and brown spots, as well as a little skin from the broil. They look like the hot dog version of Altoona Hotel Pizza, the quirky Central Pennsylvania pie with ingredients beneath a yellow-cheese topping that is sometimes charred at the edges.

But the flavor and textures are scrumptious. The dog has a great snap to it, and the bun is crispy, even though everything is covered in wet ingredients. The char clearly helps everything stay crispy and hot.

The chopped onions add a little crunch that pairs well with the famous sauce, which is a bit spicy, and moderately sweet and sour. It reminds me of a fast-food sweet-sour sauce, but with a bit of a chili kick. I can imagine it going really well with chicken. It gets a bit more addicting as you go, but is missing some fat to help form a bit of a base to compliment the sourness. The melted, almost oily cheese provides some of the richness I desire, but not all of it.

But I also am not accustomed to Jim’s style of hot dogs, and have never had anything like them. Part of me kept thinking the sauce would be a chili sauce, but instead was met with a bit of spice in a gooey sweet and sour form. The charred cheese dogs overall were very savory and satisfying, as well as extremely intriguing.

Jim’s is worth a trip to Skyline Drive in West Mifflin. If you’ve been open for 100 years, you surely have found the formula to keep customers coming back.Jim’s Famous Sauce Inc. 2600 Skyline Drive, West Mifflin. jimsfamoussauce.com
© 2022 Pittsburgh City Paper