Reviews of the first 50 pages of works by local authors 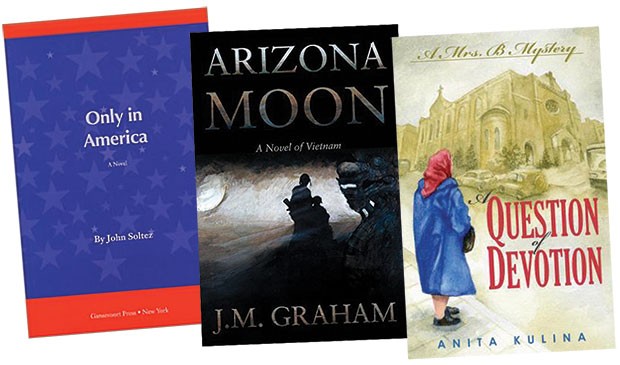 Reviews of the first 50 pages of works by local authors:

ONLY IN AMERICA. John Soltez published this political satire in 2001 (on Gansevoort Press), but the novel warrants a fresh look in 2017: It’s about a political-novice billionaire, who during a time of economic uncertainty, pushes a presidential election into the electoral college by pandering to angry, middle-class white suburbanites, and vilifying political elites and the media. Soltez’ New Orleans-bred tycoon, Buck Fourcade, isn’t exactly a Trump: Folksy rather than cruel, he closely recalls Texas billionaire Ross Perot, who twice ran for president in the 1990s (and in 1992 won almost 20 million votes); also like Perot, Fourcade is an independent rather than a major-party candidate. Soltez’ wry, 249-page narrative (available only through Amazon) also weaves in the effect of the election on the author’s Everyman, a small-town white-collar worker named Doug Murphy. Soltez’ depiction of Fourcade’s cult of personality is scarily prescient. And while the book’s epigrams, from something called The Modern-Day Guide to Insurrection, are mordantly amusing, they also feel like nothing to laugh at: One reads, “In America, kingdom of television, would it not please the people to be peddled a cartoon dictator?”

ARIZONA MOON. Vietnam’s Arizona territory, in the An Hoa basin, was notorious for its landmines and its bloody battles. It’s there that Gibsonia resident J.M. Graham, who in 1967 was a Marine combat corpsman in Vietnam, sets his novel (Naval Institute Press, 320 pp., $26.95). The story principally follows Raymond Strader, a Marine sniper from Pennsylvania with days to go in his hitch, and a young North Vietnamese soldier named Truong Nghi; Strader is called back to the jungle after a listening post of his platoon is eliminated under suspicious circumstances.

The early pages are notable for their intimate account of the dangers and discomforts of jungle combat, and cogent descriptions of action and place; lines like one about two Vietnamese soldiers at night, “their faces hovering in the dark above their cartridge vests like ancient masks carved from granite,” stick in the mind. Graham’s portrayal of American infantrymen feels credible; his characterizations of the Vietnamese are sympathetic if a bit stiff. One main character is an Apache Marine who is frequently at odds with his fellow U.S. soldiers, and Graham’s take on how both U.S. soldiers and the Vietnamese view Native Americans is intriguing.

A QUESTION OF DEVOTION. In 2003’s Mill Hunks and Renegades, Anita Kulina chronicled the Pittsburgh neighborhood of Greenfield. With A Question of Devotion (published on her own Brandt Street Press, 251 pp., $14.95), Kulina gives us a fictionalized version of the community. Burchfield is home to Mrs. B, a widow whose world revolves around crossword puzzles, the senior center and St. Mary’s Church — until, in “cozy mystery” style, she’s called on to be a detective. And of course, the mystery — a neighbor’s adult son is accused of embezzling from the church — is only half the attraction. The rest is Kulina’s loving portraits of things like church fairs, coupon-cutting, fussy-eating children, and seniors learning how to use the internet. The cover language, “A Mrs. B Mystery,” suggests a series is planned, and aficionados of both cozies and Pittsburgh neighborhoods have something to look forward to.