Yes, it’s got card tricks, mind-reading, straitjackets, sleight-of-hand and audience participation. But David London and Francis Menotti promise that their Cerebral Sorcery is no ordinary magic show. Rather, it’s a theatrical magic production that’s also “a philosophical journey into the human mind, and the quest for understanding.”

London and Menotti premiered Cerebral Sorcery in 2001, to explore magic as philosophy — or, as London puts it, “the contemplation of mysteries, and the contemplation of things we don’t understand.” They’ve since gone on to successful solo careers. London, based in Baltimore, stages nationally touring theatrical magic shows that blend storytelling, comedy and surrealism. The Philadelphia-based Menotti performs regularly at Hollywood’s Magic Castle and in 2015 stumped Penn & Teller on their TV show Fool Us.

The Cerebral Sorcery revival, produced by Circus of Wonders, includes a four-city regional tour that stops at Downtown’s Pittsburgh Playwrights Theatre space for eight shows from Jan. 13-21. The 80-minute show revolves around London and Menotti’s quest to unlock a mysterious box. Each in the series of “magical vignettes” about solving the puzzle corresponds to a separate lock on the box, and each explores some philosophical idea about how we understand reality. “We use magic in an allegorical sense” to tie the show together, says Menotti.

In short, Cerebral Sorcery promises all the razzle-dazzle of a traditional magic act, plus you go home bearing a parcel of existential conundrums (which is one reason it’s recommended for ages 16 and up). Says London, “The thinking part of the show is as important as the magic part of the show.”

London and Menotti are offering a limited number of $13 tickets for the symbolically notable Friday the 13th show. Top-shelf VIP tickets include a pre-performance close-up magic show. And you’ll save 50 percent on any general-admission or VIP ticket with the promo code “HALFOFF.”

“I think Sibelius is a composer that you really have to have the feel for — and even if you have the feel, you have to work really hard to make it work with the orchestra,” says Jukka-Pekka Seraste. Seraste, of Finland, counts the Sebelius Medal among his multiple awards and other international acclaim as one of the leading conductors of his generation. Tonight and Sunday, he returns to Heinz Hall for the first time since 1999 to lead the Pittsburgh Symphony Orchestra in Sibelius’ Fifth and Beethoven’s Seventh symphonies. Amani Newton 8 p.m. Also 2:30 p.m. Sun., Jan. 15. 600 Penn Ave., Downtown. $20-94. 412-392-4900 or www.pittsburghsymphony.org 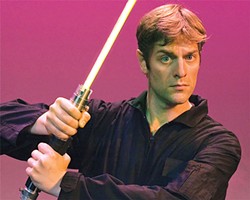 Attention, Star Wars superfans: Tonight, join Charles Ross in tribute to the original trilogy as he performs all the characters, sings all the songs, and acts out all the special effects in a solo performance titled, fittingly, One-Man Star Wars. The New York Times declares that the show “ends up achieving something like the spirit of a religious revival.” Costumes are encouraged, but be advised the theater will not allow helmets or masks. The show, at the Byham Theater, is presented by the Pittsburgh Cultural Trust. AN 7 p.m. 101 Sixth St., Downtown. $25-50. 412-456-6666 or www.trustarts.org

Quilt-like patterns mix with graffiti style and the silhouettes of soldiers, horses and villagers from Latin history, in the artwork of Crystal Latimer. “Yo soy Latina,” says Latimer, a locally based artist who explores hybrid identity and whose work has been shown internationally and at local galleries, the Three Rivers Arts Festival and Pittsburgh International Airport. R|EVOLVE, a new show of her paintings, drawings, collage and ceramic tile at The Gallery 4, opens tonight with a reception. BO 7-11 p.m. (free). Exhibit continues through Feb. 25. 206 S. Highland Ave., Shadyside. 412-363-5050 or www.thegallery4.us

They call Eliza Sidecar “the Picasso of the pasties,” and tonight the Cleveland-based performer and producer is the featured guest at Chilly Nights, Warm Delights, the new show from Pittsburgh’s own Smokin’ Betties Burlesque. At Club Café, Betties members including DemDare Eyes and Gigi Coudry will perform late-night alongside special guests including such award-winners as Boom Boom Bridgette and drag king Devon Orel. BO 10:30 p.m. 56 S. 12th St., South Side. $10. www.smokinbetties.com 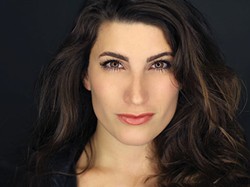 If you’ve got off work or school today — and even if you don’t — there are plenty of options to celebrate the life and legacy of Dr. Martin Luther King Jr. 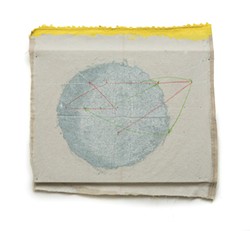