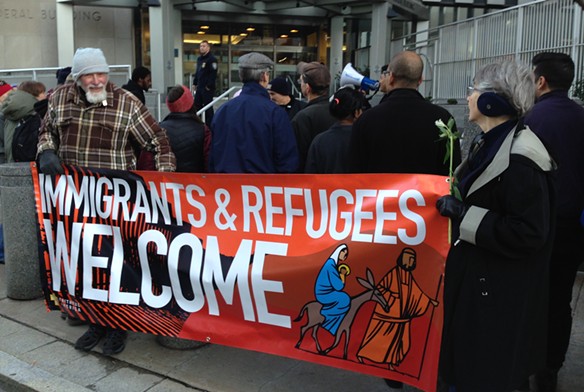 CP photo by Ryan Deto
Advocates for Martin Esquivel-Hernandez outside the Federal Building, Dowtown
Updated 11 a.m. 12/29: U.S. Judge Donetta Ambrose of the Western District of Pennsylvania has accepted the plea agreement of Martin Esquivel-Hernandez, an undocumented Mexican immigrant and Pittsburgh resident currently facing deportation, which downgrades his charge to misdemeanor illegal possession of an identification document. He was initially charged with felony illegal re-entry, and if convicted of that charge, his deportation would be almost automatic.

In courtroom 3B inside the federal courthouse, Downtown, Esquivel-Hernandez pleaded guilty to the charge and was sentenced to 89 days incarceration, which will be considered time-served because he has spent the last eight months in detention, and no fine or supervised release will be imposed. Esquivel-Hernandez's lawyer, Sally Frick, said at the hearing that this misdemeanor charge and sentence of less than 90 days gives him a good chance at avoiding deportation.

"[Esquivel-Hernandez] knows he has immigration consequences upcoming," said Frick to Judge Ambrose. "So it's necessary for him to have only a misdemeanor and less than a 90 day sentence."

Assistant U.S. Attorney Paul Hull, who is prosecuting the case on behalf of the U.S. government, agreed not to oppose the recommendation of lessening the charge to a misdemeanor and sentencing Esquivel-Hernandez to less than 90 days. Esquivel-Hernandez pleaded guilty to intentionally using another man's VISA document when he attempted to cross the border in Nogales, Ariz. in December 2011.

Esquivel-Hernandez spoke during the hearing, asking for leniency from Judge Ambrose before she accepted the plea and sentenced him. "I [used an illegal ID] because I needed to be with my family," said a teary-eyed Esquivel-Hernandez in Spanish. "Anyone would do anything, even the impossible, to be with their family."

Ambrose said she accepted the plea and granted a variance to only sentence Esquivel-Hernandez to 89 days because she believed he was telling the truth about his intentions to enter the U.S. and because he has been a positive force in the Pittsburgh community.

After the sentencing, Esquivel-Hernandez was taken by U.S. Marshals back to the private, for-profit prison in Youngstown, Ohio where he will be handed over to U.S. Immigration and Customs Enforce (ICE). ICE will then decide whether to deport Esquivel-Hernandez.

Guillermo Perez, of the Labor Council for Latin American Advancement, has been advocating for Esquivel-Hernandez and said after the hearing that this was a victory made possible by the seven months of advocacy by labor groups, faith leaders and immigrant and Latino activists. But, he added that now the groups supporting Esquivel-Hernandez must turn their attention to ICE.

"[President Barack Obama's] administration has said it deports felons, not families," said Perez. "Well, [Esquivel-Hernandez] is not a felon and he has a family."

Alma Brigido, Esquivel-Hernandez's wife, was present in the courtroom during the hearing. Together they have three children, including a U.S. citizen son. Brigido said in Spanish through a translator, that she felt good about the result of the hearing, because "in a way it is good news."

On Thu., Dec. 29, Martin Esquivel-Hernandez, an undocumented Mexican immigrant and Pittsburgh resident currently facing deportation, hopes to reach a plea deal reached with Western Pennsylvania District U.S. Attorney Soo Song. It will give him a better chance at avoiding deportation, and potentially return him to his family.

Song contacted Esquivel-Hernandez’s lawyer, Sally Frick, the afternoon of Dec. 28 to notify her that the U.S. Attorney’s office was open to negotiating with Esquivel-Hernandez. According to Antonia Domingo, of the Labor Council for Latin American Advancement (LCLAA), which has been advocating for Esquivel-Hernandez for months, a deal has been reached that would reduce Esquivel-Hernandez’s felony illegal re-entry charge to a misdemeanor, and keep him off the U.S. Immigration and Customs Enforcement’s (ICE) “Priority Deportation” list. The plea deal still must be approved by a judge.

Esquivel-Hernandez has been living in Pittsburgh for more than four years, where he has been an advocate for immigrant rights, better Spanish-language service in public schools, and a devout parishioner at two local churches. In May 2016, he was taken by ICE the day after he marched in an immigrants-rights rally in Beechview. Esquivel-Hernandez had traveled more than 5,000 miles to escape gang violence in Mexico City and reunite with his family, who had immigrated to the U.S. in 2012 before him. He has no criminal record beside two minor traffic violations.

News of his potential plea deal was announced on Dec. 28 at a rally in front of the U.S. Courthouse, Downtown, where more than 80 supporters had gathered to call for his release. A previous plea deal was rejected last month by Esquivel-Hernandez because that new charge would have still been a felony, almost guaranteeing his deportation. Guillermo Perez, of LCLAA, said to the crowd that the new plea was a small victory, and that now the advocates must turn their attention to ICE.

ICE still has a detainer on Esquivel-Hernandez, and because he has been deported before, he is not guaranteed an immigration hearing. Kai Pang, of labor coalition Pittsburgh United, who has also taken up advocating for Martin, said that ICE should release Esquivel-Hernandez and return him to his wife and three children (the youngest is a U.S. citizen). Esquivel-Hernandez has been held at a for-profit, private prison in Youngstown, Ohio for more than seven months.

“What a waste of time and resources to try and deport this man who has helped this community so much,” said Pang at the rally. “This is the kind of person we want in this community.”

Mike Saber, a Swissvale resident, came out to support Esquivel-Hernandez because he wants to “make Pittsburgh a better place” and stand up for people being treated unfairly.

“We need to be an inclusive society,” said Saber at the rally. “Where there is injustice, there really cannot be justice.”

If the plea deal is approved by a judge, Esquivel-Hernandez will most likely be taken into ICE custody and possibly deported. Perez said LCLAA plans to submit a prosecutorial discretion letter to ICE that might convince them to free Esquivel-Hernandez. However, Perez notes that ICE has no obligation to release Esquivel-Hernandez and can deport him regardless.

Margaret Philbin, of the U.S. Attorney's office, said local rules of the court do not allow the office to comment at this time.

According to Domingo, Esquivel-Hernandez's plea hearing is scheduled at 9:15 a.m. on Thu., Dec. 29 at the U.S. Courthouse, 700 Grant Street, Downtown.