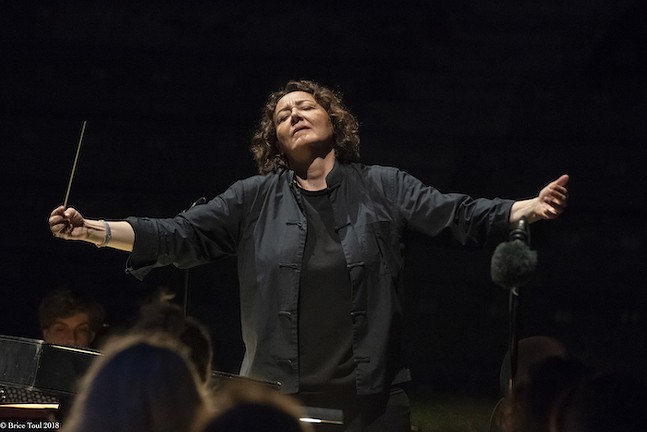 Photo: Courtesy of Brice Toul
Nathalie Stutzmann is one of five guest conductors making debuts during the PSO's 126th season.
After celebrating its 125th anniversary through digital performances, the Pittsburgh Symphony Orchestra returns to Heinz Hall for its 2021-22 season, which will feature nine PSO premieres as well as five world premiere performances.

The 126th PSO season will open the weekend of Fri., Sept. 24 with an “Opening Weekend Celebration,” featuring Helene Grimauld on the piano. It will be the first of 10 Music Director Manfred Honeck Concert Weekends, which will include performances such as “Tchaikovsky: ‘The Nutcracker Suite,’” featuring James Ehnes on the violin, “Honeck Conducts ‘The Firebird,’” featuring Kian Soltan on the cello, and “Rachmaninoff & Bruckner,” featuring Yulianna Avdeeva on the piano.

In addition to world premieres of pieces such as an arrangement of Giacomo Puccini’s “Symphonic Suite” from Turandot by Honeck and Tomás Ille, the season will also present work from five living composers making their debut on the classical subscription series.

Michael Daugherty’s “Fifteen: Symphonic Fantasy on the Art of Andy Warhol” and David Ludwig’s “Concerto for Two Clarinets and Two Bassoons" will be a chance for attendees to not only hear new composers to the PSO’s classical subscription series, but also new pieces as part of its world premiere. Wynton Marsalis, another new composer to the series, will also present “Fanfare” as a PSO premiere. Vivian Fung and Jessie Montgomery also make their classical subscription series debuts.

Honeck will be in his 14th season with the symphony, which will have its 50th anniversary at Heinz Hall. Byron Stripling, who was appointed principal pops conductor in January 2020, will have his first in-person season at the historic concert hall. A variety of guest conductors will join them, including five debut conductors: David Afkham, Kirill Karabits, Matthias Pintscher, Nathalie Stutzmann, and Lorenzo Viotti. Rudolf Buchbinder, Pablo Heras-Casado, Juango Mena, Juraj Valčuha, and Osmo Vanska will return as guest conductors.

The season will also feature seven debut soloists and artists, including violinists María Dueñas, Alexi Kenney, and Daniel Lozakovich. Dashon Burton will also debut on the bass-baritone, along with Kian Soltani on the cello and Micah Wilkinson as the PSO Principal Trumpet. Lauren Snouffer, a soprano, will also debut, joining 13 returning soloists and guest artists.

The PSO will have two recording weekends during its season. The first will be March 25-27, during which the PSO will record Anton Bruckner's “Symphony No. 7” and Mason Bates’ “Ressurexit,” the latter of which was commissioned for Honeck’s 60th birthday. The second will be June 17-19, during which it will record Tchaikovsky’s “Symphony No. 5” and the Honeck and Ille’s arrangement of Giacomo Puccini’s “Symphonic Suite.”
© 2022 Pittsburgh City Paper