A Night at the Riverhounds: Soccer, booze, and the Steel Army | Pittsburgh City Paper 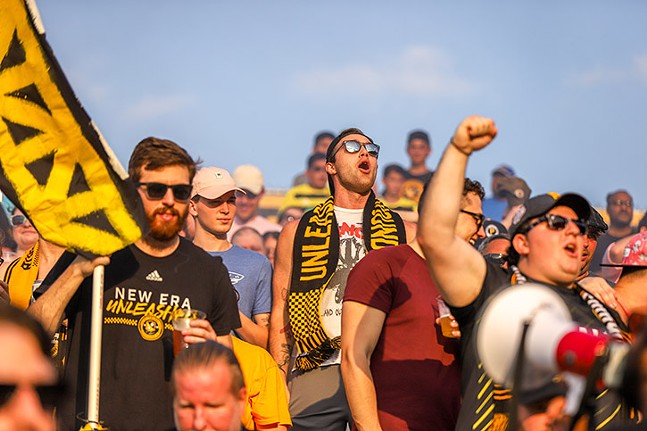 Photo: Kaycee Orwig
The Steel Army cheers on the Pittsburgh Riverhounds.
I was greeted with hot dogs, cornhole, and a Jell-O shot.

So goes the pre-game tailgate from the Steel Army, the fan group of the Pittsburgh Riverhounds SC, the city’s professional soccer team. With COVID-19 restrictions lifted right in time for summer, I headed to Station Square’s Highmark Stadium on a recent gameday to get the full experience of attending Pittsburgh’s primary “non-major” sports team.

And let me tell you, you can’t get the full experience of the Hounds without the Steel Army. Started in 2008 with semi-impromptu meet-ups of passionate soccer fans at Piper’s Pub on the South Side, the group’s fandom really exploded with the opening of Highmark Stadium in 2013, which gave them a designated cheering section and a team that became a more serious part of the local sports conversation.

The club president who ushered the Steel Army through all of these times, Maria Petrillo (also the one who so kindly offered me the Jell-O shot), handed the reigns over to Josh Brokaw earlier this year, in part because many of the founding members had outgrown devoting so much time to the group in recent years. It’s a lot of work to volunteer for the Steel Army. Members don’t just tailgate, they perform right along with the team — singing chants in the stands to rally fans during the matches, bringing along instruments and noisemakers, and often traveling as a group to away games.

But the current group isn’t worried about interest slowing down. In fact, even after the pandemic, they’re on track to increase membership again this year, in part because of a growing youth participation in soccer in Pittsburgh, which has started to work its way up to the Riverhounds.

You can tangibly see this in the Riverhounds tailgate, which is heavily 20-somethings grilling out and playing cornhole, but also includes a whole group of kids in a circle, dribbling a ball. The meet-ups are to connect and have a good time before the game, but members say they always try to have something bigger in mind as well. Their current initiative is a Prideraiser, where people pledge an amount to donate per Riverhounds goals scored in the month of June, with all of the money going to the Persad Center, a local outpatient counseling center for LGBTQ patients.

Knowing that the Army’s true antics would come out after the game started, I headed inside the stadium to scope out the best seats. Which, as it turns out, is pretty much most of them. Built right along the river, Highmark doesn’t quite have PNC Park’s notorious skyline, but it’s not far from it. There’s no bad view because there’s only 5,000 seats.

But the team has plans for more changes that they hope will make it even better.

Gregovits, a native Pittsburgher who took over the team in April, says they’re making upgrades to the stadium including riverside seats along the field and two different forms of suites that will overlook the action from above.

I personally find a great spot to watch the first part of the game standing from the patio-type area right behind one of the goals, as you walk in the main entrance. Four chicken fingers and a beer later, and I’m enjoying the action within 15 feet of the opposing team’s goalie.

The more I watched the teams warm up and fans trickle in, I realized the unique experience that sports at this level can provide. Just want to hang out in your ticketed seat, getting a great view of the whole game? Fine. Want to do like I did and stand in a free area and watch the intricacies of the goalie up close and personal? Done.

Of course, you can also choose to buy a ticket to sit in the Steel Army’s section. Most of them filed into the stadium with a few minutes to go before kickoff, maximizing their tailgate experience. Just prepare for it to get loud. The biggest contribution the group makes to the team is the in-game atmosphere they provide.

“You go to other sports, and it’s the stadium and the PA system that’s providing a lot of the energy,” Brokaw says. “Here, we’re creating it authentically.”

Photo: Kaycee Orwig
The Steel Army cheers on the Pittsburgh Riverhounds.
It’s apparent from minute one. You may be used to other sports, which follow the ebbs and flows of the game in terms of the energy level in the stadium. Not in soccer, and not with the Riverhounds. The Steel Army makes you feel their presence from start to finish. Vuvuzelas, chants, drums, you name it. Brokaw says some of these chants are at the point that they’ve passed down through multiple levels of Steel Army fandom.

“Harrisburg hasn’t been in the league for a few years, but you’ll still hear a chant every once in a while saying ‘We Hate Harrisburg’ just because it’s something they’ve done for so many years,” he says. In this case, Miami’s goalie having the last name Sparrow led to a high number of Pirates of the Caribbean-themed barbs.

After Riverhounds forward Albert Dikwa had a goal called back for offsides in the first minute, the Riverhounds sent Highmark Stadium into a frenzy, with a beautiful goal from forward Russell Cicerone. Shortly thereafter, as I was taking notes from my perch behind the goal, I got approached by a pair of fans, not at all shy to initiate a conversation.

“What are you, a scout?” one of them asked, with zero prior introduction.

“Well, use this as your headline,” he responded, after telling him that I was writing about the experience of going to a Riverhounds game. “Local Yinzer says the Riverhounds are kicking their ass!” 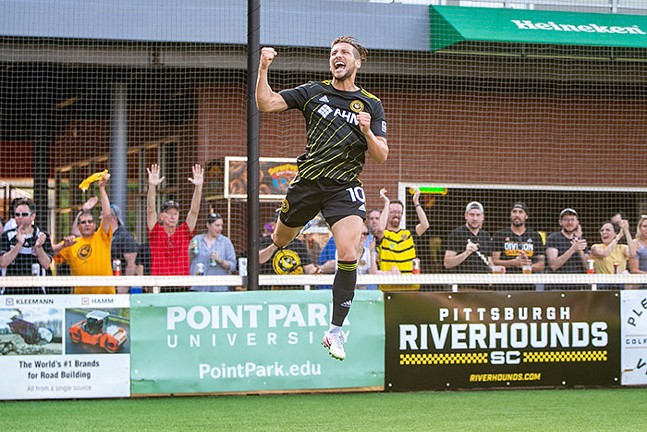 Photo: Chris Cowger
Riverhounds Russell Cicerone
And that’s kind of how it goes at a game: perpetually buzzed, surprisingly intense, and a ton of fun. I watched a man nearly get thrown out for banging on every object he could find screaming, “I want a goal!” then saying, “What, I’m not allowed to cheer?” when security approached him. I took in some great views of the city. And I watched some really high quality soccer.

The Riverhounds did not, in fact, kick their ass, as a breakdown right at the end of the first half led to a game-tying goal. The game stayed that way, with a few controversial no-calls near the end of the game firing up the home crowd, but eventually leading to a 1-1 tie.

There’s probably something fitting about the match ending just as it started, in a city where the results of the sports teams can drive entire sections of the economy. Here, nobody left a winner, and yet everyone felt like their Saturday was much better off for having gone. Pittsburgh Riverhounds
riverhounds.com/game-schedule
© 2021 Pittsburgh City Paper