Vocalists Katy Williams, Ian McEuen and Kevin Glavin are more than up to the task in this chamber opera 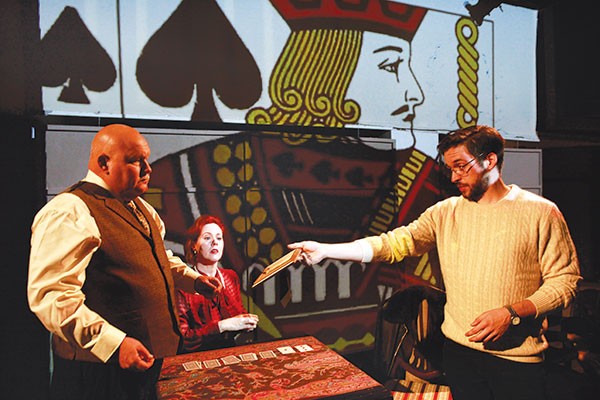 The Man Who Mistook His Wife for a Hat concerns opera singer and teacher “Dr. P,” who is found to have visual agnosia, a neurological condition preventing him from synthesizing visual information. After years of working around the problem, Dr. P. and his wife seek the assistance of Dr. S.

Doesn’t sound musical? Well, if they can make a murderous barber or a Treasury secretary sing, anything’s possible. Nyman’s score reflects what’s known as “minimalist music” (quite fittingly, since Nyman coined the phrase). It’s intensely insulated, with little variety; at times the music suggests the feeling of the synaptic energies inside Dr. P’s brain scrambling for a way out. The “lyrics” of Rawlence and Morris appear to be dialogue and narration lifted directly from the book.

It’s not entirely clear that this operatic retelling brings any illumination to the story of Dr. and Mrs. P. Indeed, The Man Who Mistook His Wife for a Hat quickly becomes, and remains, an artistic experience solely about itself — which, by the way, is intended not in any form as a complaint, just a description.
Quantum presents a highly respectable production of the work, with Karla Boos’ fiercely specific stage direction coupled with Joe Seaman’s visually rich projections and Britton Mauk’s set design, all lit with Andrew Ostrowski’s customary skill. Andres Cladera’s tightly controlled musical direction of the seven-piece orchestra (strings and piano) gives the evening propulsion and pace.

This can hardly be an easy show to sing, but Katy Williams, Ian McEuen and Kevin Glavin, as Mrs. P., Dr. S. and Dr. P., respectively, are more than up to the task. McEuen is the smooth narrator of the piece, and his wonder at the workings of the human mind mirrors our own. Glavin does well portraying a man refusing to let the outside world come between him and his music, and Williams is almost a lioness, prowling the stage ready to strike at anything threatening her home.

The one concern is the performance venue: A cavernous and unfinished office space is not necessarily an acoustic paradise, and often the sound is sour and muddied, which might be why the production, though sung in English, is both miked and equipped with supra-titles. Without those aids, it would be difficult to understand the words.

But since Quantum’s “thing” is the invasion and adaptation of non-theatrical spaces, there’s always going to be risk involved … and without risk there is no theater.