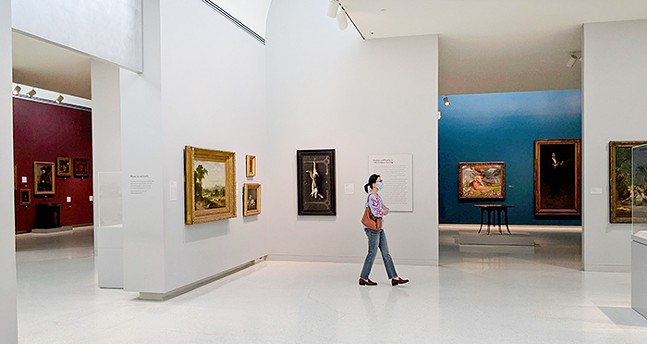 On Wed., June 16, CMOA announced that Carnegie International will run from Sept. 24 through April 2, 2023. The news comes nearly a year after the museum chose New York-based curator, art critic, and writer Sohrab Mohebbi to organize the show.

In a July 2020 press release, CMOA director Eric Crosby said of Mohebbi, “I have deep admiration for his curatorial work, which consistently foregrounds artists who are uniquely equipped to guide us in navigating the complexities of contemporary life. As a curator, he is committed to examining immediate, local concerns in a broader picture of the world today. I have no doubt he will lead our museum in creating an International that is more collaborative, interdisciplinary, and socially engaged than ever before.”

Mohebbi has worked at numerous art institutions, including the REDCAT and Hammer Museum in Los Angeles and SculptureCenter in New York, where he most recently served as curator. His background also includes music, most notably as a member of the Iranian undergound band Sado Bisto Haft (translated in English as 127), which played in Pittsburgh back in 2008.

In addition to the dates, a press release says Mohebbi has assembled a "Pittsburgh-based curatorial team, an international curatorial council, and an advisory group" to create the exhibition.

The Pittsburgh-based curatorial team will have associate curator Ryan Inouye and curatorial assistant Talia Heiman contributing to "exhibition research, artist selection, public programs, and publication projects for the Carnegie International." They will also work closely with Mohebbi in guiding the process of working with and choosing artists, international collaborators, and local partners.

“I am honored and excited to have the opportunity to work on the Carnegie International with this dream team," says Mohebbi, adding, "We came together in a historical moment that we are still to process.”

Mohebbi expands on this in a Carnegie Museums of Pittsburgh magazine article from fall 2020, in which he admits to struggling with the concept of the "remote studio visits" that were necessary during the pandemic.

Mohebbi suggests that the pandemic, as well as social justice efforts, will most likely inform much of the 58th Carnegie International, no matter what part of the world an artist represents.

“The pandemic has set in motion practices of solitude and solidarity; perhaps we can think of these practices as the way of the artist and the struggle of the activist," says Mohebbi. "Never before have these two positions been more aligned on such a planetary scale. The artist’s primary material is the use of their time, while an activist shares their time with others and distributes it. In the making of this exhibition, our hope is to sync our clocks with both.”

While Mohebbi and his new team are still in the planning stages for the exhibit, CMOA previously said that the themes of "decentralization and reconstitution" would guide his early research. Also central to his research will be a "collaborative curatorial effort to explore how we reconstitute our lives after upheavals caused by colonialism, imperialism, and environmental disaster."

The latest Carnegie International will also mark a major change for the long-running show. Crosby, who stepped into his role in February 2020, announced that going forward, he plans to stage the International every four years, as opposed to every three to five years. The last International opened in 2018.

The shift is not new to the International, which originally staged annually after its creation in 1896. Its content has also changed dramatically, from only focusing on painting to now being described as "the longest-running international survey exhibition in the world," right after the Venice Biennale.

“It is exciting to shape the next International and be a part of a tremendous exhibition history and discourse that in each edition had to confront, redefine, and question how art breaks away from arbitrary definitions, boundaries, and borders,” Mohebbi says.
© 2023 Pittsburgh City Paper