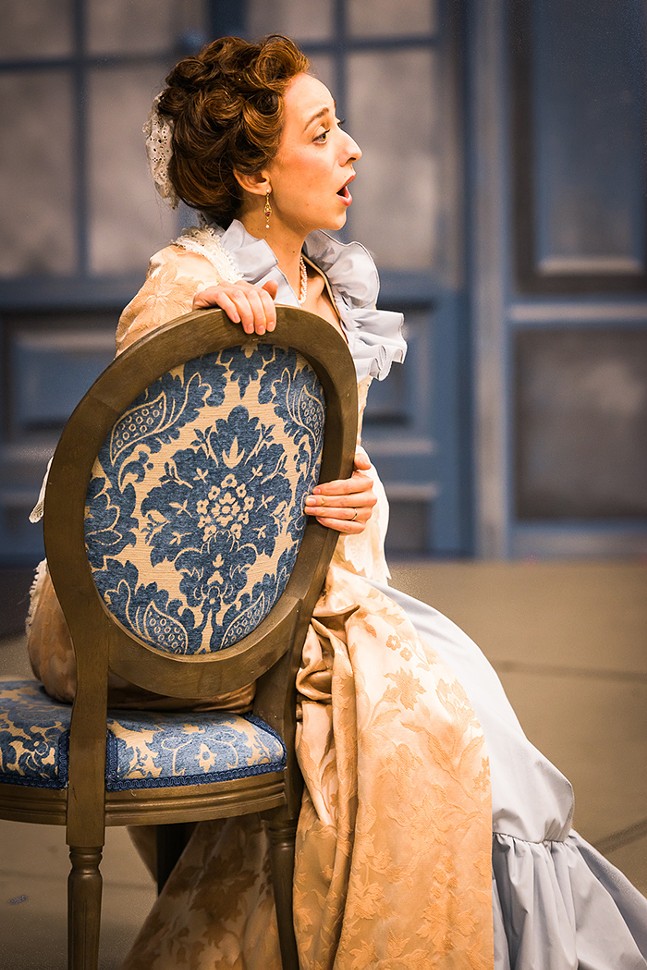 Courtesy of Louis Forget
Pascale Beaudin
Pascale Beaudin lives on the North Side of Pittsburgh, but her work as an opera singer takes her around the world singing songs from Baroque and Romantic composers. And she is bringing her vocal prowess to contribute to an international opera marathon.

As part of Opera Lafayette’s 12-hour music marathon for Fête de la Musique, Beaudin will revisit past performances and recordings in two slots of the extended opera session.

Opera Lafayette’s marathon for Fête de la Musique, or World Music Day, is Sun., June 20 starting at 8 a.m. with performances in one- and two-hour slots until 8 p.m. Beaudin’s performances will be at noon as part of François-André Danican Philidor’s The Blacksmith and at 4 p.m. in a performance from the company’s archives.

Beaudin grew up in New Brunswick, Canada, and began singing in choirs when she was young. She attended the music program at the University of Ottawa, where she realized that she wanted to sing as a career. She began her stage career with Atelier Lyrique de l'Opera de Montreal and has sung in Canada, France, and the U.S., including performances in Pittsburgh with Chatham Baroque, an organization that focuses on music from the Middle Ages, Renaissance, Baroque, and Early Classical periods.

It took some time for Beaudin’s voice to develop into the Baroque and Romantic repertoire she enjoys singing, but she enjoys what she calls the “archaeological work” of trying to figure out how the composer meant for the piece to originally sound. Her first performance with Opera Lafayette was in 2013 for a double feature of Così fan tutte, an opera by Wolfgang Amadeus Mozart, and another opera by François-André Danican Philidor.

“Everybody he [Opera Lafayette artistic director and founder Ryan Brown] would ask would say no because they had better sense than me. And he did not know me at all. And when he asked, I was like, ‘I didn't have anything on the calendar for a while,’ and I was like, ‘Well, if I exhaust myself, I can rest after so yeah, sure. I'm crazy enough to do it,’” Beaudin says. “And luckily, he's hired me ever since.”

The program was intense, living up to opera’s Italian translation of “labor” or “work,” with performances three days in a row in French, which Beaudin grew up speaking. Beaudin has continued to perform with Opera Lafayette, a Washington, D.C.-based opera company that performs its season in both D.C. and New York, and she appreciates what she considers their niche of “dig[ging] up old, dusty old scores and mak[ing] them new again.”

For the 12-hour opera marathon, Beaudin looks forward to hearing her colleagues sing, although she’s not sure which performance of hers the company will select from the archives for her 4 p.m. slot, which will also feature music and dance from The Opera Lafayette Orchestra, Keven Geddes, Marianne Fiset, Nathalie Paulin, and Kalanidhi Dance.

“I try not to stress about the things I don't have any control over,” says Beaudin, although she knows for certain that her performance in Philidor’s The Blacksmith, for which she traveled to Colorado to perform, will feature in the noon performance slot.

Opera Lafayette has given a new spin to The Blacksmith, translating the original French to American English and transporting the characters — now ranchers and cowboys — to Colorado. The original opera ensembles are also interspersed with American folk songs, creating an idiosyncratic version of the 1761 opéra comique.

The marathon is free to watch, with 10 performance slots throughout the day and dozens of performers. In addition to the archival performances, it will also include a wide array of programming, including educational content for younger opera fans and families, along with a documentary going behind the scenes of the performance of The Blacksmith.

“I think we've been kind of deprived of performances and live performances, and we still are, you know.," says Beaudin. "There aren't that many live events going on now. So I think it's a great occasion to look back on past seasons of Opera Lafayette and to also make us look forward to what they're going to come up with in the next few years."

Those interested in watching the marathon can visit operalafayette.org.
© 2022 Pittsburgh City Paper