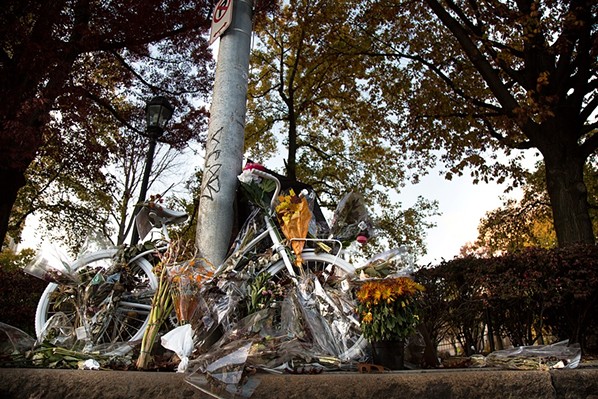 CP photo by Theo Schwarz
Susan Hicks ghost bike on Forbes Avenue in Oakland
When Susan Hicks was bicycling in Oakland on Oct. 23, 2015, she was riding the exact way Pennsylvania law told her to: as if she were driving a car.

Unfortunately for the University of Pittsburgh educator, and for those who loved her, a car collided into a car behind her and caused a chain reaction that squeezed Hicks in between two vehicles and ultimately resulted in her death. Now, on the near anniversary of that tragic day, advocates and friends are organizing a group ride to honor Hicks and to bring awareness to bike-safety issues.

"Remembering Susan helps us remember her legacy of making the world a better place to live, which include the safety improvements that are so necessary in Oakland," Eric Boerer of Bike Pittsburgh wrote in an email to Pittsburgh City Paper. He is helping organize the event with Hicks' close friends.

Hicks' death, as well as the death of cyclist Dennis Flanagan in the West End, was the last straw for many bike advocates in Pittsburgh. On Aug. 31, hundreds of advocates packed a room at Carnegie Mellon University, demanding that PennDOT start to create more bike-friendly infrastructure, starting with Forbes Avenue in Oakland, were Hicks was killed.

Dawn Seckler, a close friend of Hicks, says that Hicks was a very passionate academic adviser to her students who helped them get grants and scholarships.

"Susan was really that kind of adviser that would get students really excited about getting opportunities," says Seckler. "And she would work hard to make those possibilities become realities."

To celebrate Hicks' life as a cyclist and educator, her close friends started a scholarship fund last year in her honor. Seckler says that Hicks had such a positive effect on people, that the fund raised more than $20,000 in less than a year, and a Pitt student has already received money from the scholarship.

"This was a really tangible way that we could create a legacy to Susan's energy," says Seckler.

Seckler adds that the cycling community has also been instrumental in advocating for Hicks.

For those wishing to participate, a memorial event starts at 4:30 p.m. today (Oct. 21) at the Hicks ghost bike, near the corner of Forbes and South Bellefield avenues, near the Carnegie Music Hall. A memorial group ride then starts at 5:30 p.m. from the ghost bike to Brillobox in Bloomfield, where a fundraiser happy hour will be held from 5 to 8 p.m.

Those interested in donating to The Susan M. Hicks Memorial Fund can do so on Pitt's donating website.