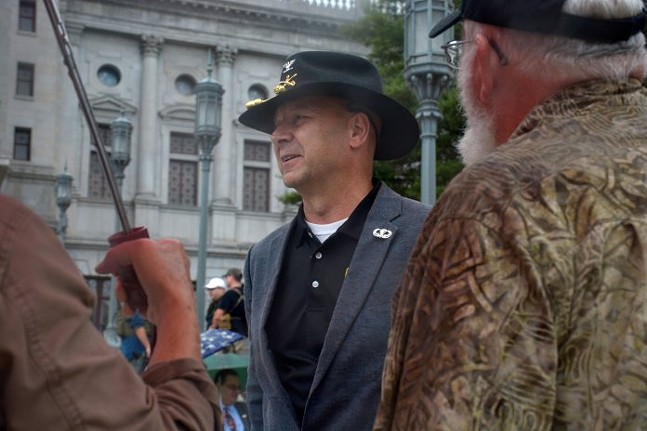 Capital-Star photo by Stephen Caruso
Doug Mastriano speaks with attendees on the Capital steps of a rally for gun rights on Sept. 29, 2020
Three Pennsylvania state lawmakers visited an ongoing review of the 2020 election in Maricopa County, Ariz., on Wednesday.


On Wednesday, a PA Delegation consisting of State Senator Doug Mastriano, State Senator Cris Dush, and State Rep. Rob Kauffman will visit the AZ Capitol to meet with members of the AZ Legislature, and then tour the AZ Audit to receive a brief from the forensic audit team.


This review was approved by the GOP-controlled Arizona Senate in February, and comes after former Republican President Donald Trump waged a months-long campaign to overturn the 2020 election results, citing baseless claims of mass voter fraud.

While unsuccessful, Trump has since promoted Arizona’s audit, believing it will find evidence of his unfounded theory of electoral malfeasance.

“I wouldn’t be surprised if they found thousands and thousands and thousands of votes,” Trump told a crowd during a party at his home in Mar-a-Lago, according to the Washington Post. “So we’re going to watch that very closely. And after that, you’ll watch Pennsylvania and you’ll watch Georgia and you’re going to watch Michigan and Wisconsin. You’re watching New Hampshire. Because this was a rigged election. Everybody knows it.”

The results of the audit couldn’t change President Joe Biden’s victory. Now that he’s been inaugurated, the only way for him to leave office is resignation, impeachment, or presidential disability, according to legal experts.

But Trump’s supporters across the country, including in the commonwealth, have taken to his call. A group known as Audit the Vote PA already has attracted 65,000 signatures to a letter asking state lawmakers to launch their own election investigation.


The Pennsylvania Legislative Delegation is currently meeting with Members of the Arizona Legislature to discuss election integrity in the United States. pic.twitter.com/JzDan3tD0V


But no such evidence was found when Maricopa County, home of Phoenix, conducted a by-hand count audit of sample ballots and hired independent firms to conduct a forensic audit of tabulation equipment. The county found no abnormalities.

Before that review was even finished, the Arizona Senate used its subpoena power to obtain the county’s 2.1 million general election ballots and hired Wake Technology Services Inc. — a Pennsylvania-based firm with no experience auditing elections — to conduct their review.

Wake TSI is part of an audit team led by Cyber Ninjas, a Florida-based cybersecurity company headed by CEO Doug Logan. Logan propagated unsubstantiated claims of “election fraud” and penned a memo that repeats false claims about foreign and digital interference in the 2020 election.

Mastriano, who visited the audit, helped connect Arizona’s senators with Wake TSI. He also brought the firm to rural Fulton County, Pa. to conduct a similar election audit there, according to the Arizona Mirror, a sibling site of the Capital-Star.

Mastriano and the Pennsylvania delegation declined a request for comment from an Arizona Mirror reporter who approached them on Wednesday.

The audit was paid for by a foundation founded by Sidney Powell, a former Trump campaign attorney who spread baseless conspiracy theories that rigged voting machines were used to steal the election from Trump. Powell is now being sued for defamation by Dominion Voting Machines.

As of May 14, Wake TSI was no longer involved with the count, according to the Arizona Republic, which reported that Scottsdale-based technology company StratTech Solutions has taken over.

As of Monday, more than 1.2 million ballots have been counted, according to an update from the official “Maricopa Arizona Audit” Twitter account.

Spokespeople for House Speaker Bryan Cutler (R-Lancaster) and House Majority Leader Kerry Benninghoff (R-Centre) said that they were not invited to visit the audit.

Cutler is “busy managing through issues here and working to complete an on-time budget,” spokesperson Mike Straub said in an email.

Senate President Pro Tempore Jake Corman (R-Centre) did not receive an invitation to attend the trip, but spokesperson Jason Thompson said a lawmaker among the delegation suggested he come. Corman, however, had a prior commitment, Thompson said.

A spokesperson for Senate Majority Leader Kim Ward (R-Westmoreland) did not immediately reply to a request for comment.

According to a press release from Mastriano, no taxpayer money was used on the trip.
Marley Parish and Stephen Caruso are reporters with the Pennsylvania Capital-Star where this story first appeared.
© 2022 Pittsburgh City Paper