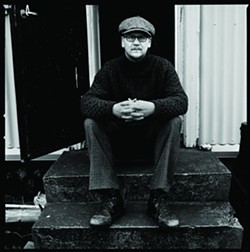 Photo courtesy of Kristinn Ingvarsson
Sjón
Sjón is an award-winning writer whose novels include The Whispering Muse, The Blue Fox and From the Mouth of the Whale; his books have been translated into 35 languages. His latest novel is Moonstone, released in August by FSG.

His history of collaborations with Björk include his lyrics for the 2000 Lars Von Trier film Dancer in the Dark.

Sjón reads at the City of Asylum tent, on the North Side, at Thu., Sept. 29, at 7:45 p.m. Admission is free but reservations are recommended here.

Russian saxophonist Alexey Kruglov and Estonian guitarist Jaak Sooäär’s trio will perform at the COAP tent on both Friday and Saturday. They’ll be joined between sets and for jazz-poetry collaborations by poets Ediwah Adler-Belendez, of Mexico, and Lithuania-born, Pittsburgh-based Rita Malikonyte Mockus.

The City of Asylum tent is located at 318 Sampsonia Way.