5: 30 p.m.
By News Editor Rebecca Addison
While protests today started off small and peaceful, a final demonstration outside of Trump’s political fundraiser at the Duquesne Club resulted in a larger, louder finish.

Earlier today, a variety of social- and environmental-justice groups held a peaceful rally outside of the David L. Lawrence Convention Center where Trump was the keynote speaker at the Shale Insight 2016 natural gas conference.

“There’s a jagoff in that building next to us,” said Matt Harrison of NextGen Climate PA. “Plus the Marcellus Shale industry is in there trying to collaborate on how to destroy our environment even more.”

“[Trump is] winning,” said hip-hop artist Blak Rapp Madusa. “That goes to show you ignorance is being repeated. It’s being passed on. How could you support such deliberate hate.

Many from this rally later joined other activists to form one massive demonstration that saw more than one hundred protesters taking to the streets of Downtown Pittsburgh to block traffic. The group staged a sit-in at the corner of Wood and Sixth streets before moving down the street to form a blockade around the Duquesne Club.

After reaching the Duquesne Club, several protesters attempted to enter the building through a revolving door before they were pushed back by police on horseback and other officers in riot gear. One man was arrested.

According to a statement from the Pittsburgh Bureau of Police: “A 63-year-old male protester went through the revolving door of the Club and prevented its movement, trapping civilians who were not protesters. He refused demands to move or come out of the door. Police freed him and the other civilians, then placed him under arrest. He will face several charges including defiant trespass, disorderly conduct, and resisting arrest.”


Protestors still yelling at police near Duquesne Club in Pittsburgh after #Trump visit shouting "why are you dressed like a soldier?" pic.twitter.com/bmAcutviU8


Atleast one arrest at #Trump fundraiser at Duquesne Club in Pittsburgh after protestors tried to enter building pic.twitter.com/d2gmw30jFZ

"This is what democracy looks like" Protestors outside of #Trump fundraiser at Duquesne Club in Pittsburgh pic.twitter.com/rt6cpWdRll


"I didn't want to cede the space" says woman in white hat who was forced away from entrance by Pittsburgh police with batons and riot gear pic.twitter.com/2NUgg39nkX


After horses rushed protestors in front of #Trump fundraiser at Duquesne Club in Pittsburgh, police in riot gear are blocking entrance


12:50 p.m.
Protesters are attempting to enter the Duquesne club for the Trump fundraiser, per CP's Rebecca Addison


Protestors are attempting to enter the Duquesne Club in Pittsburgh to stand against #Trump fundraiser in Pittsburgh pic.twitter.com/mriJfAw3W8


12:44 p.m.
News Editor Rebecca Addison reports that protesters are on the move toward the Duquesne Club

Buses being waved through. Now Sixth Street is blocked off from Wood to Smithfield streets pic.twitter.com/J3TXjddwo2


Police at intersection of Wood and Sixth at #Trump protest in Pittsburgh pic.twitter.com/Dmtbo0FJG4


Blocking sixth and Liberty at #Trump protest in Downtown Pittsburgh "no KKK no racist USA, no Trump" pic.twitter.com/NyHvXUxalw


Thank you to the Allegheny County Fire Dept! Incredible guys who have some amazing toys! #ThankYou #Pittsburgh pic.twitter.com/PvhfmzgacV


Police have stopped pedestrians and cars on Liberty Ave. for #Trump fundraiser at Pittsburgh Duquesne Club. Apologize for inconvenience pic.twitter.com/wQAZ0Wo7Wb


Pittsburgh police are blocking an alleyway behind Donald #Trump next stop: a fundraiser at the Duquesne Club pic.twitter.com/HhwphyVOOG


12:06 p.m.
A Yahoo News National Correspondent has posted the portion of Trump's speech talking about the Charlotte Protests.


More protesters outside #Trump fundraiser at the Duquesne Club in Pittsburgh "Donald Trump you can't hide, we can see your racist side" pic.twitter.com/jFu1jbtEG5

31-year-old Alex Cromer came to the protest this afternoon to contribute to the cause the only way he knows how: art. He's inviting people to contribute to his art project by writing poems on leaves to add to the tree he's been building on site. "No words of hate, only love," Cromer says. "We need to care. We live on this earth. I'm an artist so I figured this is how I can contribute most effectively."

11:47:
Watching on the live stream: Speaking about the police protests in Charlotte, Trump says that violent protests aren't the answer and says it's not fair to all of the "law abiding African Americans." Sounds like a 2016 version of former Gov. EvanMecham's comments years ago about the "good blacks."

11:41 a.m.:
News Editor Rebecca Addison reports that about 100 protesters are gathered outside of the convention center, a much smaller crowd than Trump's previous visits.

11:38 a.m.
We wonder if Clinton supporter and Allegheny County Chief Executive Rich Fitzgerald knows about this. (FYI, it's the Airport Authority's fire Department.


Here’s Trump’s prepared remarks on Charlotte and police unrest in Pittsburgh this AM: pic.twitter.com/5dli5tifxn 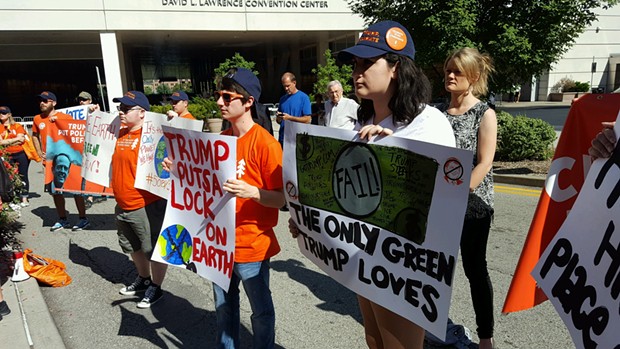 
Protestors outside of the convention center in Downtown Pittsburgh for Donald #Trump visit at Marcellus Shale conference #SHALEINSIGHT pic.twitter.com/q0JuyFA5YG

10:30 a.m.
Republican presidential nominee Donald Trump is in Pittsburgh today and so are the protesters.

Trump will be at the David Lawrence Convention Center today to speak at Shale Insight 2016, a conference focused on the development of the Marcellus Shale natural gas industry. Later in the day, he'll be at the Duquesne Club. Downtown for a political fundraiser.

A number of organizations will be protesting at events outside of Trump's stops including One Pittsburgh, NextGen Climate PA, Clean Air Moms Action and 1Hood. They will also be joined by local politicians and labor organizations.

In a statement released yesterday the International Union of Operating Engineers Local 66 announced they were ending their support of the Shale Insight conference because of Trump's selection as the keynote speaker.

“We support the Marcellus Shale industry and the ample work the industry brings to our union members," said business manager Jim Kunz. "However, we cannot support a conference that highlights Donald Trump, a candidate who would make life harder for working people. Trump has a disastrous record of stiffing workers to enrich himself. Whether he’s crossing picket lines or saying our wages are ‘too high’, it’s clear that Donald Trump is driven by the same corporate greed that has decimated the middle class.”

Trump's appearance at the conference in Pittsburgh this week coincides with national outrage over the 1,172-mile Dakota Access Pipeline, which would transports 500,000 barrels of fracked crude oil daily from North Dakota to Illinois. . Last week protesters blocked Liberty Avenue in Downtown Pittsburgh.

Stay tuned for our coverage throughout the day.