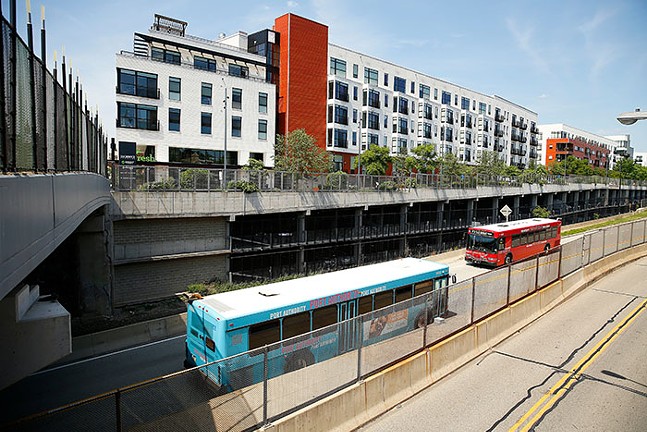 CP Photo: Jared Wickerham
Apartment complex directly above the M.L.K. Jr. East Busway in East Liberty
Pittsburgh is primed for TOD. For the uninformed, which is just about everyone not obsessed with the wonky details of municipal zoning, TOD stands for Transit-Oriented Development. The term means encouraging dense housing and amenities within walking distance of frequent and high-quality transit, like a high-rise apartment building on top of a subway station.

Pittsburgh doesn’t have many subway stations, but it still has scores of amazing opportunities for Transit-Oriented Development. There are transit stations along light-rail lines and busway stations that have little to no housing, offices, or amenities like grocery stores. Many of these stations have surface parking or vacant lots, practically begging for development.

The Port Authority of Allegheny County has created guidelines for municipalities on how to best implement TOD, in hopes the zoning changes will take off in the region. Breen Masciotra, section manager for Port Authority’s Planning Department, says “the more frequent and reliable transit service is in a corridor, the more likely it is that a person could live in that corridor and rely primarily on public transit as their primary mode, and that is the ideal condition for TOD.”

“So, yes, Allegheny County has some strong corridors for TOD, and we anticipate that our forthcoming long-range plan will include recommendations to develop more corridors and more opportunities for TOD,” says Masciotra.

And at least one Pittsburgh-area community is close to adapting a whole new zoning code, one that is adaptive to its surroundings and includes two different sections of TOD. In May, Dormont borough started to advertise new zoning changes it hopes to pass through council. It includes two districts surrounding the borough’s three light-rail stops that would encourage buildings of three-to-eight stories, with those structures oriented to promote pedestrian access to the light-rail stations and other nearby walkable amenities.

Beyond those high-minded goals, TOD might also be necessary to solve traffic congestion and prevent it from getting worse. Pittsburgh is like most regions in the country, and development usually proliferates in greenfield plots of land (ones that have never been developed) located in suburban areas far from the urban core, and not served by public transit. That means more drivers commuting to our concentrated job centers in Downtown and Oakland, and more congestion on the Parkway North and Parkway West and other areas seeing growth.

But there isn’t a simple switch to convert Allegheny County to TOD zoning. Those changes only happen municipality by municipality. With over 100 municipalities in the county, and many of them wary of big changes, a large trend of TOD needs to be set in order to convert much of zoning.

Geary doesn’t expect Dormont’s proposed changes to come easy, saying he predicts the next public hearing to have significant pushback from some community members. But he is hopeful that, if passed, TOD will give the old borough a new and unique path for growth, one that will set it apart from the more typical suburb.

“The single family homes in Dormont, we have enough, we are now focusing on density. The North Hills can have the Ryan Homes,” says Geary of the construction company that focuses primarily on sprawling single-family home complexes on the periphery of Allegheny County. “I am excited, there are always people who want things to stay the same. But I think TOD will bring people into the community, and we will see them shopping at our stores. It’s a win-win.”

CP Photo: Jared Wickerham
The Potomac light-rail station in Dormont
Dormont incorporated as a borough in 1909, making it the first independent municipality in Allegheny County’s South Hills. The borough is less than one-square mile in area and it lies just south of Pittsburgh’s Beechview neighborhood. Port Authority’s Red Line light rail runs through Dormont and has three stations located in Dormont. The borough is also served by the 41 bus, which runs through West Liberty Avenue, Dormont’s main artery.

If the zoning changes were to pass, Dormont would likely become the first municipality in Allegheny County to adopt the TOD zoning regulations. The changes also rewrite Dormont’s Euclidean zoning code to a form-based code, which would also likely be a first in Allegheny County.

Euclidean zoning is named after the town of Euclid, Ohio, which was the first to establish it after winning a landmark U.S. Supreme Court case in 1926. Euclidean zoning establishes single-use zoning, where only one kind of use or development is allowed per zone, and has become the predominant zoning style in the U.S.

However, it has been criticized for often making amenities and jobs located far from residential neighborhoods. Dormont borough manager Ben Estell told the Pittsburgh Post-Gazette in May that Euclidean zoning has been exploited and historically used to keep low-income people and people of color from moving into communities.

“It was used to protect wealthy, white property owners by segregating the single-family zoning, which was on the white side of the community,” said Estell. “It added all of the park districts into that area, while the poor section of town, which was where the people of color lived, was all the multi-family units and was also where the industrial zones were intended.”

According to the latest census estimate, Dormont is 92% white, which is much whiter than neighboring Pittsburgh and Allegheny County at large. “One of the reasons for that is it’s expensive to get a single unit,” says Geary. “We struggle with that. The history of redlining, Dormont wasn't innocent by any means.”

Geary says Dormont is dominated by single-family homes, and the borough has been very successful at attracting young families. He says the borough is a good mix of younger families, with parents who work white-collar jobs, and older retirees who come from more blue-collar backgrounds. However, he says housing prices have been spiking in Dormont, and supply for new or available housing units is drying up.

He says there really isn’t any room in the small borough to develop without changing the zoning. Existing single family homes make up the vast majority of Dormont. Without building up in some areas, there isn’t any room to add housing supply to the increasingly popular borough. Like many municipalities in Allegheny County, Dormont’s overall population has dropped since 2010, but residents aged 25-44 have increased by 16%.

This is why Geary says TOD is necessary for Dormont. Some of the borough’s very few spaces to develop include surface parking lots next to the Dormont light-rail station. He says developers have expressed interest in building multi-unit housing there, which he believes can attract new residents to the borough without bringing more cars and congestion.

“The only spot we have open is the two flat lots at Dormont Station, and that is the worst use of that space,” says Geary. “I can tell you anecdotally, I have had people reach out to me, large developers. They are chomping at the bit to have this kind of access online.” Masciotra says this kind of TOD could not only be a boon to Port Authority, but also improve quality of life for the communities that implement it.

“Taller buildings and fewer parking spaces are both ways to create more space that people can occupy close to public transit,” says Masciotra. “The more people who live, work, or play near public transit, the more people are likely to ride it. Studies have shown that people who live in transit-oriented developments own fewer cars and make fewer car trips than those who don't live as close to transit; fewer car trips mean less traffic congestion and better air quality, resulting in safer streets.”

This runs in contrast to the typical American strategy of constructing more roads to improve mobility, reduce congestion, and improve quality of life. In Pittsburgh, like most other U.S. cities, there is little evidence that constructing more vehicle infrastructure has improved things over the last few decades. According to nationwide transit advocacy organization Transportation for American, the Pittsburgh region has seen an 8% growth in freeway miles between 1993-2017. With that small growth in new roads, Greater Pittsburgh has still seen a 90% increase in congestion, even as the overall population of the regions has decreased by about 1%. More Pittsburgh roads, fewer people overall, yet still significant growth in traffic congestion.

One possible solution to this phenomenon is providing homes near good public transit, especially housing that is attainable to populations more likely to use transit. Geary says TOD zoning is a way to attract denser development, and bring in new residents to Dormont who don’t have access to a car or limited access to vehicles. Geary says he and his wife only own one car, and they commute to their jobs easily via public transportation. 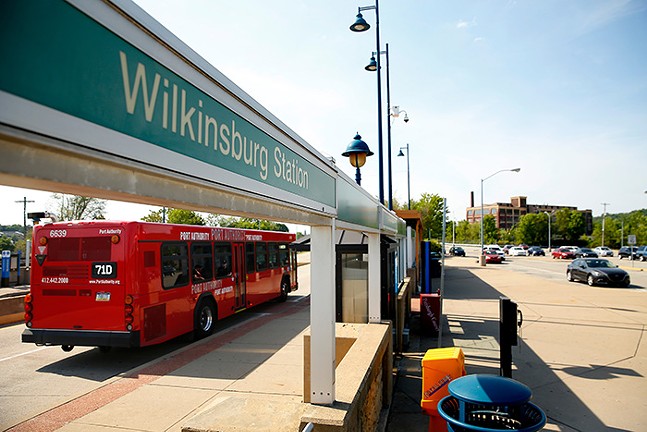 CP Photo: Jared Wickerham
Large surface parking lot next to Wilkinsburg Busway Station
“Having the ability to move to a TOD zone, it opens up the community to a lot of people who are underrepresented,” says Geary. Ideally, Geary says Dormont can work with the state to get subsidies for any new developments, so they include permanent affordable housing. Geary says another way to keep housing prices down is to add more supply, and to ensure developers don’t have any extra and unnecessary costs. Dormont’s proposed zoning would also eliminate parking minimums where off-street parking is available and it would decrease parking minimums in areas without off-street parking from one parking space to every new unit, to one parking space to every two new units.

“People ask, ‘How do you not provide parking?’” says Geary. “Well, the folks that live there, they want to take the bus or light rail.” Even though there are several benefits for TOD zoning, Geary predicts some pushback from these proposals. Dormont has already seen opposition before, when a development proposal near the Dormont Station was blocked by a lawsuit from community members. Pittsburgh, which lacks TOD zoning, also saw a setback in an attempt to bring a TOD project to the East End. In April, Pittsburgh’s Zoning Board ruled against a proposed 230-unit and retail development — which included permanent affordable units and was located just feet from the East Liberty Busway Station. The board believed that development would create detrimental impacts involving traffic and blocking views for some nearby residents.

Lack of TOD zoning makes it easier for these kinds of projects to be blocked. The East End development needed a zoning variance because it wanted to build 25 feet higher than the code allowed. And without TOD zoning in place, developers can be required to build mismatched projects in areas well served by transit, like a recently proposed 42-unit, mixed-use apartment project in Carnegie that is required to include 45 surface parking spaces, even though the borough has several surface parking lots nearby. The mixed-use apartment project is just one-third of a mile from Carnegie’s Busway Station.

This is why Breen is hopeful Dormont’s proposed zoning changes will succeed, and that some TOD momentum will grow among other Pittsburgh area municipalities. She says Dormont used Port Authority’s TOD guidelines to write its new code, and other communities are currently in the development stage of future code rewrites. Wilkinsburg Council created a TOD overlay district in their borough just east of Pittsburgh city limits. Wilkinsburg's main busway station is surrounded by a massive surface parking lot, which is less than one-third of a mile from the borough's business district.