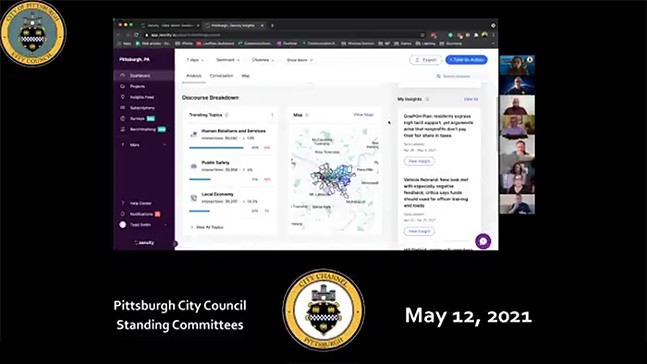 At a May 12 Pittsburgh City Council Standing Committee meeting, the administration of Pittsburgh Mayor Bill Peduto sought council approval of a new $30,000 contract with ZenCity, so the city may continue to utilize the software for another year, with the option to renew next year. According to Todd Smith of Pittsburgh’s Department of Innovation and Performance, the city has been using ZenCity since last year, and because of a “different procurement method,” there was no contract before City Council last year to authorize its use, and was started as a way to gather sentiment around the coronavirus pandemic.

“The mayor’s office had requested this in 2020 during COVID,” said Smith during the May 12 meeting. “There was an exponential increase in social media chatter. There were no physical meetings where people can come and interface.”

“We don’t look at anyone’s profile or personal data, we just focus on the content and engagement of the post,” said Smith, who added that the tool can help with responses to things like snow removal.

In a press release, Gross elaborated more on her criticism of the city using ZenCity, reiterating her concerns around why council is only learning about this tool now, and not last year when it was first used.

“We have not had any public conversation about the ethical guidelines for the Mayor and his staff using surveillance technology, and we just found out that they have been using it for twelve months,” said Gross. “Surveilling the public isn’t engaging the public. It’s the opposite.”

City use of ZenCity has also been criticized by Allegheny County Councilor Bethany Hallam (D-North Side) and statewide advocacy group One Pennsylvania. Gross, Hallam, and One Pennsylvania have endorsed Peduto’s mayoral primary opponent Ed Gainey in the upcoming election.

According to a press release from Hallam, she and others were critical of ZenCity use because the dashboard showed that COVID wasn’t the only subject being monitored, and noted how police reform, the George Floyd protests, and Peduto’s OnePGH initiative were being monitored.

Pittsburgh City Council members watching ZenCity presentation on May 12, 2021
Hallam worries that the tool is being used to Peduto’s political advantage. The OnePGH initiative is Peduto’s strategy to receive payments from large nonprofits, and he recently announced an update to that initiative. Gainey has criticized the OnePGH effort, and has vowed to re-establish a lawsuit against large nonprofits in Pittsburgh, who, despite owning large and valuable swaths of land in the city, don’t pay property taxes thanks to a state law.

“In addition to monitoring posts about OnePgh and Pittsburgh Police, the official Office of the Mayor is monitoring ‘Mayor Mentions - Social Media’ and ‘Pittsburgh Politics’ which one could cynically conclude provides information invaluable to the Mayor’s re-election campaign,” said Hallam. “In which case, is the Mayor’s use of this software a violation of the City’s campaign finance rules? I think it’s pretty important we find out.”

In a statement, McNulty defended the city’s use of ZenCity and said it is “being incorrectly and dubiously portrayed by critics mischaracterizing the product.” McNulty said the topics that appeared on the dashboard were not created by the city or Peduto administration and were instead generated by the ZenCity’s municipal government experts based on the level of online discussion.

“The service, called ZenCity, provides cities with real-time snapshots of anonymous resident feedback about government issues, and is used by more than 175 municipalities and government agencies nationwide including the cities of Los Angeles, Chicago, Houston and New Orleans,” says McNulty. “The service is essentially the next generation of 311 services for the digital age. In a time when people are more frequently using Facebook, Twitter and other social media outlets to lodge complaints about City services than they do rotary phones, ZenCity helps cities cut through the overwhelming flow of social media information to track what are still traditional residential concerns, from trash pickup to potholes to other matters of public concern.”

News reports show that ZenCity is used by dozens of cities, including Philadelphia, Los Angeles, and Dayton, Ohio, and got increased attention and use during the pandemic. In North Carolina, a town used it to monitor sentiment about e-scooters, which the town was considering implementing.

McNulty added that the city recently used ZenCity to help identify confusion people were showing around OnePGH and prompted city officials to begin writing a one-page description of the plan to use online. During the May 12 meeting, city staff also said that ZenCity has been helpful in hearing not just the loudest people on social media, but to see how more residents are feeling about certain topics, and to identify additional neighborhood concerns, like park issues in Observatory Hill.

Tensions have been high around social media monitoring in Pittsburgh and other cities across the U.S. since the Black Lives Matter protests of 2020. Pittsburgh Police were monitoring protesters' social media accounts and livestreams, and using facial recognition software, leading to charges against dozens of protesters.

According to Axios, Kelsy Finch of the privacy-focused nonprofit the Future of Privacy Forum, there is a distinction between personally tracking individuals and public monitoring.

"When we think of public monitoring, people jump to tracking individuals, which feels more targeted than tracking aggregate sentiment," Finch told Axios in 2019. "It feels very different when people can put you in jail versus coming out to fix your pothole. People for the most part like to be lost in the crowd and the sense of security that comes along with it."

On May 12, Councilor Anthony Coghill (D-Beechview) also expressed some concerns saying that he thinks the city’s current process of getting resident feedback is adequate. Councilor Erika Strassburger (D-Shadyside) requested that both Gross and Coghill receive more answers to their concerns promptly and said she continues to have questions about ZenCity use as well.

“Because once you put anything on social media, it’s for public consumption, there’s no expectation of privacy,” said Lavelle. “I just assumed government was already doing these sort of analyses.”

The bill for the new ZenCity contract received a favorable recommendation with Gross opposing the vote, and Coghill abstaining.
© 2023 Pittsburgh City Paper