Pittsburgh bocce traditions are alive and well in Bloomfield

“Everybody gets together, and usually there’s a little bit of wine involved.” 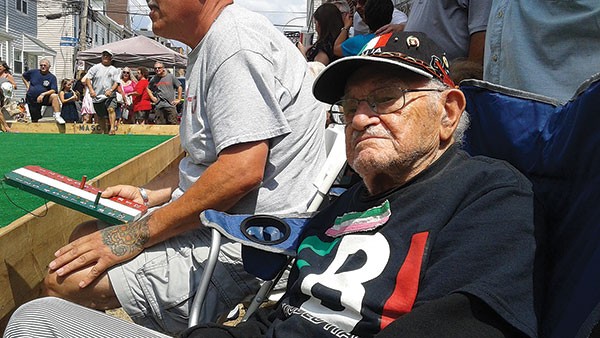 Sure, Bloomfield’s Little Italy Days festival isn’t exactly true to its name. There’s a wide array of non-Italian items for sale along Liberty Avenue; you can easily eat chicken fried rice or barbecue instead of pizza; and if you’re remodeling your home, there are even siding and gutter kiosks. But one event is undeniably indicative of the city’s Italian heritage — bocce ball on the temporary court set up on Cedarville Street.

This past weekend (Aug. 20-21), 12 teams faced off in a two-day double-elimination tournament — teams with names like “Nonna’s Italian Army” and “Romano.” Team T-shirts said cheeky things like, “Grab your balls, it’s bocce time,” and a cigar-wielding scorekeeper yelled about the measuring tape. (This year’s winner was team “Yactown,” from Wheeling, W.Va.)

“It’s just a good time. Everybody gets together, and usually there’s a little bit of wine involved,” says John Kotlowski, a 10-year veteran, whose team, “Bocce Mania,” lost two games on Saturday. “We [usually] play every Tuesday night around 6:30 under the Bloomfield Bridge.”

But Kotlowski’s 10 years are nothing compared to Bloomfield’s own Eugene Mariana, 102, who also plays on Tuesdays under the bridge, and sat courtside with his cane watching the tourney. Mariani’s amateur bocce career began in Italy’s Abruzzi region, where he says he played in an open field. When asked to describe his years playing the game, Mariani said in his lingering Italian accent: “What’s to tell? It’s an old man’s game.”

“He’s one of the best bocce players we have, even at his age,” says his younger brother, Oreste Mariani, 87, who’s been playing bocce in Bloomfield for 22 years.

The hubris of Italian-ness was evident. Dominic Piccola, of Bloomfield, whose team Liedertafel needed another win to stay in the contest, explained his team name: “[It’s] a German club, but all four of us playing are all Italian.”

Despite the strong cultural pride, the libations and laughter brought everyone on the Cedarville court together. Says Piccola: “This is a very nice tournament where people young and old get together and try to match their skills.”