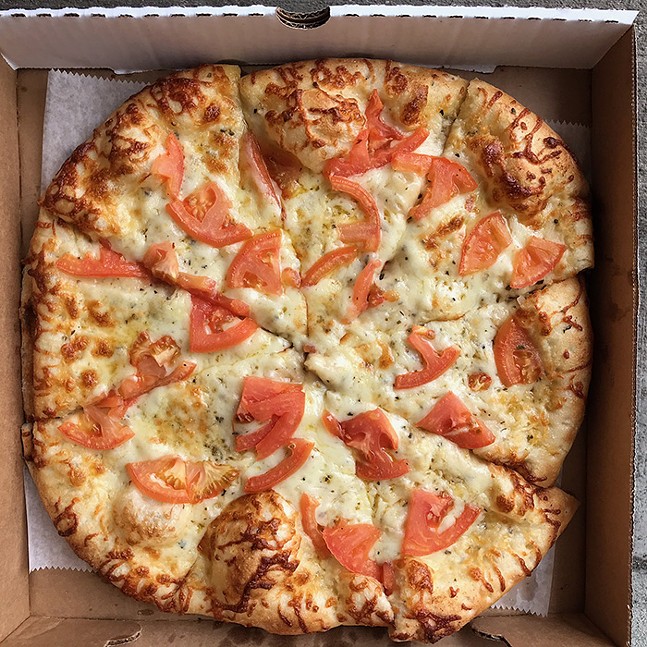 CP Photo: Ryan Deto
The White Top from Armando’s Pizza
Regional pizza styles born and bred in the greater Pittsburgh area are finally starting to see some love. Food publications are now focusing on Ohio Valley Pizza, with its airy crust and cold cheese added just after exiting the oven, resulting in a gooey, but not greasy pie. Pittsburgh City Paper even featured Altoona Hotel Pizza — made with genoa salami, a green pepper ring, and topped with square slices of yellow cheese — to the disgust and delight of readers.

But Western Pennsylvania has more pizza creations to offer, and the two I recently tried come directly from the Monongahela River Valley. Born in the steel towns of Donora and Monessen, the Mon Valley Red Top style appears to be migrating to other nearby towns like Charleroi, and it even has a sister pie called the White Top. I ordered one of each from Armando’s Pizza on the outskirts of Monessen on a recent weekend trip to the Mon Valley. The place is extremely unassuming: retro plastic signage, a small building with no seating, and a fridge full of pop. This might give the impression that it's just a run-of-the-mill pizza joint, but both Armando’s Original Red Top and White Top pizzas have intentionality to them. These pies are designed to be enjoyed on many levels.

The Red Top appears as you might expect, with red tomato sauce on top of the ingredients. The sauce is thick and rich, and sprinkled with parmesan, but also has enough herbs that balance well with surprises underneath. Directly below the sauce is a layer of pepperoni, and then cheese below that.

This combo gives each bite almost a calzone or stromboli-like quality, but with less crust, which is appreciated. And although the cheese is rich, the pepperonis really lend their spices to each bite, and the herbs in the sauce pack a punch that balances out the richness of the cheese.

Add on the soft, doughy, and slightly dense crust and Armando’s Red Top is a filling and decadent pizza. It’s like bar food, but not too over the top.

The Red Top has even more surprises. The crust is folded over the bottom later of cheese, which gives the Red Top a pseudo-stuffed crust. This also gives some space for pepperoni grease to sink into the crust, like a good West Virginia pepperoni roll. It’s like three different Italian American favorites combined: a pizza, a calzone, and a pepperoni roll all in one treat. 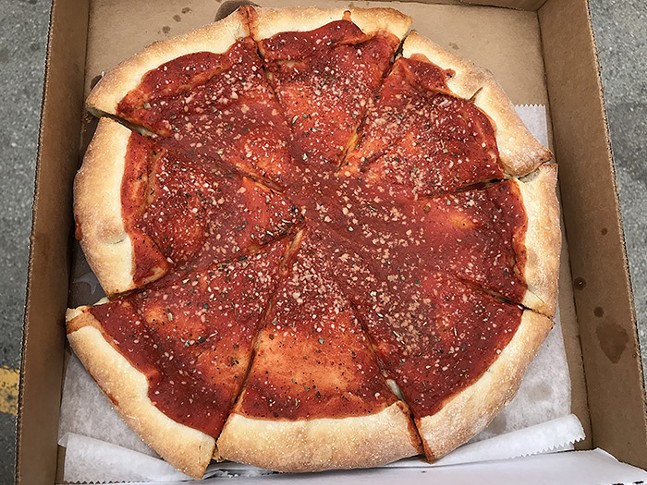 CP Photo: Ryan Deto
The Red Top from Armando’s Pizza
The Red Top only comes in a 12-inch pie, but even though I was starving, I could only manage to eat two slices. According to Pittsburgh Magazine, the Mon Valley Red Top was first discussed in the 1980s between the owners of Armando’s and Anthony’s Italiano in Donora, and is a Mon Valley homage to the Chicago-style stuffed pizza.

The perfect complement to my Red Top was Armando’s White Top pizza. This pie had the same kind of dough as the Red Top, but with layers like a traditional pizza, only replacing the traditional red sauce with a garlic butter sauce.

It tasted like the soft, doughy cheese bread I had been craving for the last several months. Each bite contains thick layers of cheese and a strong garlic sauce to keep you coming back. A modest addition of sliced, fresh tomatoes added just enough sweetness and freshness to the White Top, so it wasn’t too rich.

Both the Red Top and White Top are worth a trip to the Mon Valley.
Armando's Pizza. 201 Tyrol Blvd., Monessen. armandospizza.net
© 2022 Pittsburgh City Paper