The dramatic wallop delivered is real. 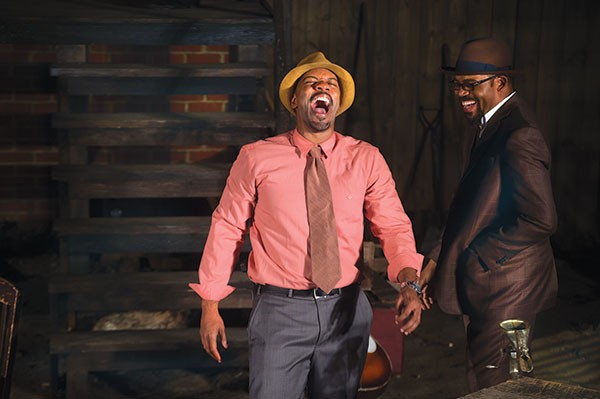 There is a definite frisson in entering the “stage” of Pittsburgh Playwrights Theatre Co.’s production of Seven Guitars — it’s the backyard of playwright August Wilson’s childhood home. That’s in fact the original setting of the 1996 New York Drama Critics’ Circle Award winner for best play (also nominated for the Pulitzer, Tony and Drama Desk awards).

It’s 1948. All the action is outdoors, and so is the audience. The house is real, as are the chickens nesting under the porch. And the dramatic wallop delivered is real. The title is a vague reference to the métier of the central character, a guitarist-singer down on his luck who sees his big chance. More specifically, Seven is the number of characters, instruments for the blues and for Wilson’s poetry. They blend in various combinations, and everybody gets at least one big solo.

Company artistic director Mark Clayton Southers faced many challenges; there were some rough spots on opening night, but I trust they’ve been patched. Leading the cast as the doomed Floyd “Schoolboy” Barton, a smooth Jonathan Berry mixes hope, desperation and sex appeal. But for serious SA, there’s Jamilah Chanie as Ruby, a vixen with a golden (if calculating) heart. Wilson and Playwrights veteran Wali Jamal delivers another great performance as the passionate, shaman-like Hedley.

Leslie “Ezra” Smith and Kevin Brown delineate Barton’s sidemen, respectively the doubting drummer Red Carter and the dandy harmonica player Canewell. Floyd’s history is not one to inspire enthusiasm from his intimates, especially his main squeeze, Vera, played by Ty Barrow topping anger with tenderness. Terri Bridgett gets some of the best comic lines as the truly querulous Louise. Stage manager Shanita Bivins and crew deserve a medal.

There really is something spiritual in the place. Southers prefaced the play with a bit of history, and when he said Wilson’s name I saw the house’s back door open on its own. My seatmates gasped, too. Oh — wear casual shoes and bring bugspray.