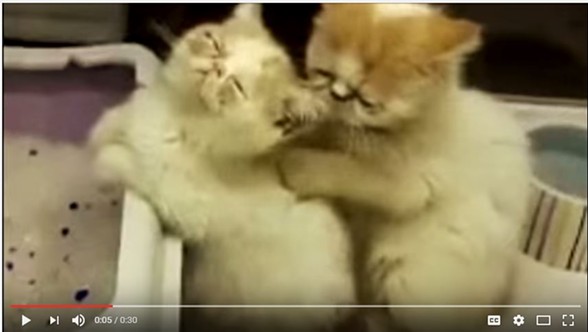 Image courtesy of youtube.com
Yes, these kittens are in a political attack ad against Republican U.S. Sen. Pat Toomey of Pennsylvania.
If you watch TV and didn’t know anything Pennsylvania’s U.S. Senate candidates, odds are you’re an expert now. The faces of Republican incumbent Sen. Pat Toomey and Democratic challenger Katie McGinty have been seen on the airwaves probably more than any casual political observer would like. The Pennsylvania Senate race has raised $35 million and spent $25 million, the most money of any other statewide senate race, according to OpenSecrets.org. And most of that money is spent on ads.

With all that cash comes some doozies of commercials. A U.S. Chamber of Commerce ad portrays McGinty, a former Pennsylvania environmental secretary, as a zealot looking to tax the energy of kids playing on swing sets (“Run Jimmy! Run!”). And a Majority Forward PAC ad plasters Toomey’s mug on a candy heart and asserts that he and Wall Street are valentines. (Toomey was an investment banker before entering politics in the late '90s.)


But the most interesting and bizarre ads are those apparently targeted to a meme-happy generation that is obsessed with cute animals. An anti-Toomey ad shows kittens scratching each other’s backs, a nod to how Wall Street firms have given him campaign donations (see above). And an anti-McGinty ad airing in Philadelphia says voting for McGinty would be like choosing to eat a live-hamster sandwich (see below).


But are these advertisements reaching the voters they should be? Probably not. Studies show that TV ads do very little to influence voters. And young people, those who watch traditional television less than anyone, might be even more left in the dark. However, these advertisements are also available to watch online.

According to a recent poll from Suffolk University, young Pennsylvanians (18-34) were undecided more than any other age group in the state's U.S. Senate race. Furthermore, people in this same age range also reported the highest percentages of not knowing who Toomey and McGinty are, 14 percent for Toomey and 27 percent for McGinty.

And this poll was taken the last week of July, weeks after the cat and hamster ads assaulted our eyeballs.

Nonetheless, more money will be spent, and voters can probably expect weirder and weirder ads trying to draw their attention.