CP photo by Ashley Murray
Springdale resident Marti Blake, who lives across the street from the Cheswick Generating Station, shows photos of coal dust on her patio.
On Monday night, about 100 people crammed into a small, stuffy room at the Allegheny County Health Department's air-quality offices, in Lawrenceville, to testify on a proposed permit for the Cheswick coal-fired power plant, which sits along the Allegheny River in Springdale.

"We do not oppose reasonable regulations," said Kenn Bradley, a worker with the International Brotherhood of Electrical Workers Local 29, in his public testimony. "We all want clean air, but the plant workers are very concerned that the proposed Title V permit from the county would increase operating costs and ... puts the Cheswick power station at an economic disadvantage with respect to taxpayer-subsidized renewables and other power plants outside of the county." 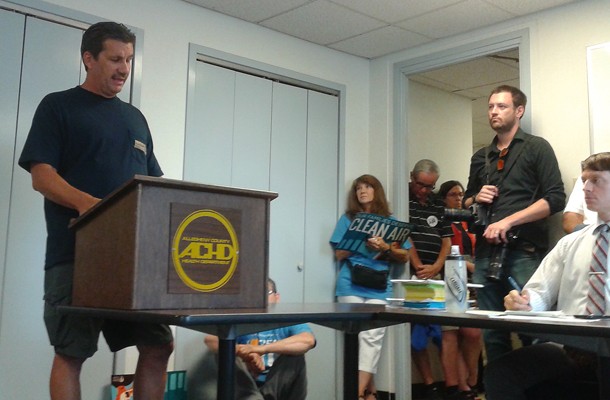 The proposed permit tightens the amount of sulfur dioxide (SO2), nitrogen oxide (NOX), particulate matter smaller than 2.5 microns (PM2.5) and sulfuric-acid mist that the plant's owner, GenOn, can emit. Comparing the plant’s former permit to the new draft, health-department deputy director Jim Thompson says the amount of allowable SO2 would decrease by 59 percent; allowable NOX by 48 percent; PM2.5 by 25 percent; and sulfuric-acid mist by 80 percent. The permit would also require the plant to run its pollution-reducing equipment most of the time.

The plant has not been running at full capacity, and its emissions levels have been below its current allowable limits. But Thompson says that if the plant ran at the same rate as it did in 2014, NOX emissions should be reduced by about 70 percent.

According to the U.S. Environmental Protection Agency, SO2, sulfuric-acid mist and NOX released into the atmosphere cause acid rain and form ozone (which forms smog). Exposure to SO2 can also affect the respiratory system, causing asthmatic symptoms. Also, the EPA says, “numerous scientific studies connect particle pollution exposure to a variety of health issues” including reduced lung function, asthma attacks, heart attacks and premature death in those with lung or heart disease. These pollutants can travel in the wind for long distances, affecting surrounding areas, even in other states.

That's why several residents testified in support of the new permit.

"How many of us need clean air to breathe, to live? We have a responsibility. We are showing our responsibility and saying, 'Please do your best for us,'" Dianne Peterson, who lives roughly ten miles from the plant, said to health-department staff present at the hearing. "Because when you get sick, what wouldn’t you do to get your health back? It’s your kid, your body, your spouse, your asthma, your cancer. It’s all of our responsibilities, and we’re handing it to you and saying, ‘Please take it to the most stringent level you can to protect all of us.’”

A resident who lives across the street from the plant, Marti Blake, waved around photographs of black dust that builds up on her patio. "I'm consistently cleaning coal particles."

While several comments took an emotional tone about the economy and health, local air-quality watchdog Group Against Smog and Pollution, which has previously worked on regulations for Cheswick, read a statement — and submitted written comments — regarding whether the health department is consistently following the EPA's SO2-measurement rules.

"The Rule expressly requires that 'the air agency [emphasis in original] shall conduct the modeling analysis' if it chooses to use air dispersion modeling to characterize peak 1-hour concentrations of SO2 in areas effected by emissions from a source that is subject to the Rule," GASP executive director Rachel Filippini read from her written statement. (CP obtained a copy after the hearing.) "Section V.A.1.u [of the permit] would violate the Rule by allowing the Plant’s operator to conduct the air dispersion modeling. To comply ... ACHD, the air agency with jurisdiction over the Plant, must be the one to conduct air dispersion modeling pursuant to the Rule."

In its written statement, emailed to CP after the hearing, power company NRG — which recently acquired GenOn — contends that its already doing environmentally responsible work because it installed pollution-reducing equipment.

"GenOn, now a subsidiary of NRG, has spent more than $400 million on emissions control equipment at the Cheswick plant since 2003, and has dramatically improved the plant’s environmental footprint," said a written statement emailed by David Gaier, NRG spokesperson. "The plant is, and has been in compliance with all applicable environmental laws and regulations including all statewide standards established by PA DEP. We look forward to continue working with the ACHD to arrive at a permit that is fair, environmentally responsible, and keeps the station on an equal footing with other generators across the state."

According to the health department's press officer, Melissa Wade, the public record of the hearing will be available on the department's website within a few days.