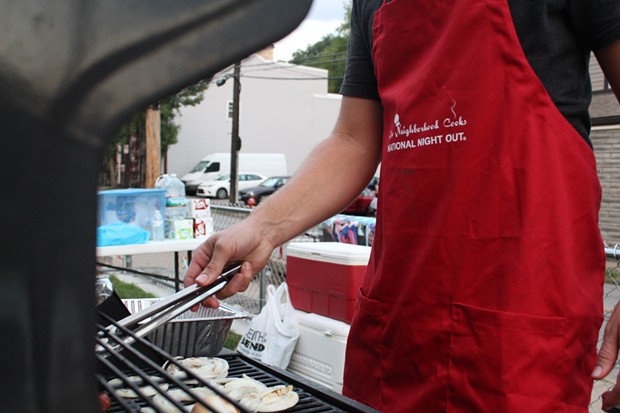 CP photo by Billy Ludt
Event organizers yelled to passers by, asking if they'd like something to eat from off the grill.

On the first Tuesday in August of every year, residents from across the nation gather for communal outdoor events to establish stronger relationships between communities and their police force.


“I think it brings communities together,” says Allegheny County Executive Rich Fitzgerald. “I think anytime in a neighborhood when you know your neighbors, it’s a healthy thing. It breaks down barriers. There are people with different religions, backgrounds, sexualities.


“These events improve quality of life. Sometimes people get to talk about what they want to do with their neighborhood. Those kinds of neighborhood solutions come up.”


Fitzgerald visited eight neighborhoods Tuesday evening, and said he recognized a commonality among the crowds: they were multigenerational. Night Out events were held at churches, community centers, parks and playgrounds. Organizers often bring in social service agencies and outreach groups to talk about public safety, drug addiction and childcare.


“The neighborhoods are safer when they’re together,” says Spring Garden block watch chair Denise Pierce. “Safer Together is the theme that the city of Pittsburgh public safety department uses, and we find with some of our blighted neighborhoods here — [that's] right where a lot of crime was going around.”


Police officers from the jurisdiction stopped by the Spring Garden parklet throughout the evening. Larry Crawford, police community relations officer, spoke to the crowd briefly, introducing himself to neighbors. There were appearances from Fitzgerald and District 1 Pittsburgh City Councilor Darlene Harris as well.


“We had everybody here. It probably scared people away,” says Raphael Walton with a laugh. Walton and Pierce co-organized Spring Garden’s Night Out event.


“The event was our most successful in terms of the entertainment,” says Pierce. “We were given a budget. We were able to pay [the performers] $200. We were never able to do that before. So in terms of this as an event, and giving multiple things, that dancing really set it apart from any of our other times. It was pretty much a nice summer night, with a little entertainment and good food.”


Wayne Younger, minister at Cityview Church, spoke at the event and praised community gatherings and his neighborhood.


“I just think it’s an important thing whenever the community is gathering, just to be a part of it and to care for neighborhood unity,” says Younger. “To basically get out with the neighbors and find out what moves them."


“I basically gave thanks to the folks who organized the event and talked about what I see as the unique things about our neighborhood,” he says. “It’s a racially diverse neighborhood. People who have means and people who don’t have access live right next door to each other. I also talked with them just about the fact that when we do things like this event and come together across all our different lines, we humanize each other.”