“I’ve got as much Richie Rich in me as I do Superman and Spider-Man.” 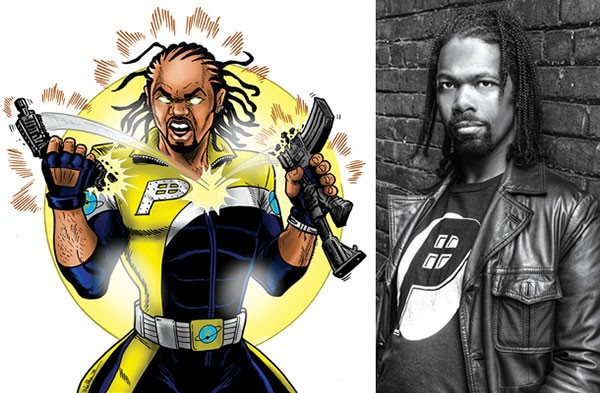 Photo courtesy of Matthew A. Butkus
Marcel Walker’s Hero Corp. character The Pro; Marcel Walker
Few local comics artists get solo gallery shows. But Marcel Walker’s a bit different. He’s an African-American artist in an overwhelmingly white field, and much of his work addresses social issues in one way or another.

Take Hero Corp., International, the indie comic-book series that’s among the works featured in To Tell the Troof, Walker’s upcoming show at Most Wanted Fine Art. Hero Corp.’s premise is that if there were superpowered beings, they’d work for corporations. The Pittsburgh-based super troop, which debuted in 2010, is led by The Pro, a Superman-like character whom Walker modeled after … himself. “Black people responded to that,” Walker says, citing a need for more diversity in comics. “If that can inspire black people to do whatever, that’s what I want to do.”

Others are taking notice. Walker recently received an award from the Advancing Black Arts in Pittsburgh Fund. The money from the Pittsburgh Foundation and the Heinz Endowments will help him complete the third issue of Hero Corp., due out in January.

Walker’s work also features in Chutz-Pow!: Superheroes of the Holocaust, the Holocaust Center of Pittsburgh’s comics series about ordinary people who saved lives threatened by the Nazis. In volume two, released in April, Walker potently wrote and drew “Secret Identities,” the story of Irena Sendler, a Polish Catholic who worked with a group that rescued and sheltered Jewish children. Walker designs and letters the books, too.

Walker also supplied original artwork for Comic-Tanium, a touring exhibit commissioned by The Minerals, Metals and Materials Society’s to explore actual science via the world of superheroes. Other clients have included the Greater Pittsburgh Food Bank, for which Walker created superheroes out of fresh produce, like kale and avocados.

Of his artistic influences, Walker says, “I’ve got as much Richie Rich in me as I do Superman and Spider-Man.”

The Pittsburgh native, now 45, graduated from the Art Institute of Pittsburgh at 19. “I always knew I wanted to make comics,” he says. He went on to teach cartooning at both Pittsburgh Center for the Arts and the ToonSeum; his students included a young Ed Piskor, whose résumé includes the internationally best-selling Hip Hop Family Tree series.

After losing a 2001 lawsuit against DC Comics (Walker claimed that a Superman storyline he pitched showed up uncredited years later), Walker turned to more personal, independent work to complement his commercial clients.

Walker is a big part of a local comics scene that includes names like Piskor and Jim Rugg. Chutz-Pow lead writer and artist Wayne Wise calls Walker “an amazing cheerleader for comics in general, and other people’s work.”

Or, as Walker himself puts it, “I’m trying to produce work that everybody can see themselves in.”