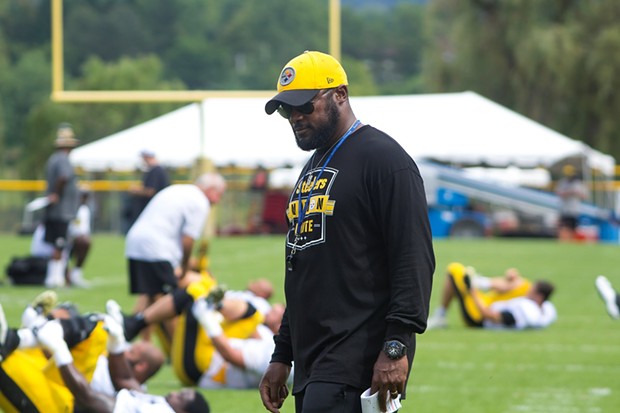 The team will open camp on July 28, with the first public practice on July 29. The Steelers were 10-6 last season, and any hope of bettering that mark starts with what Coach Mike Tomlin once famously called “football in sweatpants.”

As in previous years, City Paper will be live at training camp preparing our 2016 Steelers Preview. If you're in the mood to read about them now, check out our preview from last year and see how close we were in our predictions. According to a release from St. Vincent’s College: “Fourteen public practices are scheduled this summer with a special 7 p.m. night practice set for Friday, Aug. 5, at Latrobe Memorial Stadium preceded by Steeler Fest in downtown Latrobe from noon to 6 p.m.”

The full release from St. Vincent’s is after the jump.

LATROBE, PA – Saint Vincent College will extend its campus hospitality to the Pittsburgh Steelers players, coaches, staff and thousands of fans for the 51st consecutive year this summer.

“We are very proud of our long and successful history of working closely together,” Saint Vincent College president Br. Norman W. Hipps, O.S.B., said. “We are looking forward to this 51st year and to welcoming all of the members of Steelers Nation and all of Saint Vincent College’s students, alumni and friends.”

Players will report to camp on Thursday, July 28, and the first open practice for fans will be on Friday, July 29. The Steelers Experience will open at noon offering interactive games for children and adults.

A Black and Gold Mass is scheduled for 11:30 a.m. Sunday, July 31, in the Basilica with Archabbot Douglas R. Nowicki, O.S.B., officiating. The Steelers players and staff have been invited and the general public may attend. No tickets or reservations are required.

There are 14 practices which are scheduled to be open to the public, 13 on the Saint Vincent campus and one at Latrobe Memorial Stadium at 7 p.m. on Friday, Aug. 5. Half of the practices are scheduled on weekends including two on Fridays, two on Saturdays and three on Sundays.

The Steelers official merchandise tent will be open throughout the opening day and on every day of public practice.

They are offering a host of popular Steelers logo merchandise again this summer including NFL board game with player figures, a four-spice collection, watering can, a laser light that projects onto a house, airplane glider and dominos to name a few new items.

In addition, the store will also be offering favorites such as mugs, pennants, training camp T-shirts, pens, pencils, glasses and framed pictures of players.

Other popular Steelers logo items that will return to the Bookstore shelves include Steelers wheel covers, license plates, stadium cushions, panoramic photo of Heinz Field, flip-flops, lawn sign, gloves, checkers, action figures, cars, mailbox flags, Lil’ teammates NFL figures and even a screwdriver. All of the items are also available for sale at the Bookstore’s online site at http://bookstore.stvincent.edu.

The Bookstore will also sell a variety of ice cream novelty items.

For the fans who visit camp, the College will have concessions near St. Benedict Hall, in the Steelers Experience area, next to the Steelers merchandise tent near the parking area and in the concession stand at Chuck Noll Field. The Shack snack bar inside the Robert S. Carey Student Center will also be open. Hours of operation for the concession areas are 1 to 6 p.m. on practice days.

The Steelers and Saint Vincent are again collaborating to offer campus visitors a welcoming hospitality with free parking and free admission. Visitors are welcome to sit in the bleachers of Chuck Noll Field or to bring folding chairs or blankets for seating around the perimeters of the fields outside the fencing. Picnic baskets and canned beverages are also welcome but no grills, alcohol, glass containers or animals other than service dogs will be permitted.

A special summer training camp logo, designed by George Fetkovich of the Saint Vincent College Department of Admission, Marketing and Communications, in collaboration with the Steelers and the National Football League, will be displayed on campus pole banners, hillside banners, the trolley, rosters, schedules, the website and other places. Car window clings with the logo will be distributed to each car that enters the parking areas. Area businesses and other organizations that wish to join in the celebration and display the logo on their marquee or other public location may download the artwork from either the Pittsburgh Steelers website, www.steelers.com or the Saint Vincent College website, www.stvincent.edu/trainingcamp.

Fourteen public practices are scheduled this summer with a special 7 p.m. night practice set for Friday, Aug. 5, at Latrobe Memorial Stadium preceded by Steeler Fest in downtown Latrobe from noon to 6 p.m. which will include an outdoor adventure arena, vendors, exhibitors, food, games, the FedEx Traveling Hall, face painting, Quarterback Challenge and Steelers Nation Unites and other activities.

Saint Vincent College’s Mister Rogers Neighborhood trolley will operate on campus throughout camp to provide tours of campus and transportation from the parking areas.

Through their first three decades in the National Football League, the Steelers held their training camp at a variety of locations, as far east as New England and as far west as Wisconsin. In 1966, for the third straight summer, training camp for the Steelers was at the University of Rhode Island. The team was there through the first four weeks of a five-game preseason schedule. Then, after a loss in Green Bay to Vince Lombardi’s Packers, Coach Bill Austin wanted the team close to Pittsburgh because the 1966 regular season was due to open with a home game against the New York Giants on Sept. 11. With no practice fields of their own at the time, the Steelers turned to Saint Vincent College. On July 29, 1966, the Steelers arrived on campus and spent a couple of weeks going through final preparations for the season. The Latrobe Bulletin report on their arrival was secondary to reports about local baseball leagues and Arnold Palmer’s appearance in the 48th annual PGA Tournament. In 1967, the Steelers conducted their entire training camp at Saint Vincent College and have returned every year since then.

In celebration of the 51st annual camp, Saint Vincent College assistant director of music, Thomas Octave, has been invited to sing the national anthem at the Pittsburgh Steelers preseason game with the Philadelphia Eagles at 7 p.m. Thursday, Aug. 18, at Heinz Field.