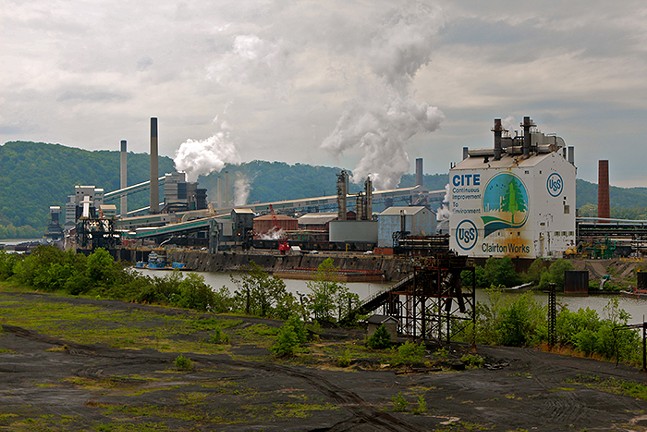 Clairton Coke Works
U.S. Steel Corporation is cancelling its $1 billion upgrades to its Mon Valley Works facilities, which includes Edgar Thomson Works in Braddock, Irvin Plant in West Mifflin, and the Clairton Coke Works in Clairton. While the cancellation will likely result in some job losses in the region, it will also reduce the levels of harmful air pollution in the Mon Valley and beyond.

The upgrades, which were announced May 2019, would have included a casting and rolling facility and a cogeneration plant. After several delays due to COVID in 2020 that increased the upgrade costs to a promised $1.5 billion, U.S. Steel pushed the start date of those upgrades to the fourth quarter of 2022. But today, the company announced it would be scrapping those plans entirely.

According to the EPA’s National Air Toxics Assessment, toxic air pollution contributes to high risk of cancer, and Clairton Coke Works is responsible for many of the airborne carcinogens in the region. Asthma rates among children in Clairton are three times higher than in the rest of the county.

“For too long, U.S. Steel has run roughshod over our environmental protections and churned out dangerous levels of harmful air pollution,” says PennEnvironment Research & Policy Center clean air advocate Zachary Barber. “Closing these batteries is a necessary and long-overdue step toward reducing that damage and cleaning our region’s air.”

Clairton Coke Works received a $1 million fine from the Allegheny County Health Department in 2019, as well as another $383,450 fine in March 2021. A study from the University of Pittsburgh also confirmed this week that the fire at the Coke Works in December 2018, which destroyed pollution controls, increased asthma exacerbations for residents in the surrounding area.

U.S. Steel President and CEO David Burritt cites the goal for the company to become carbon neutral by 2050 as a motivation for canceling the plan upgrades. As part of that goal, U.S. Steel will shift toward electric arc furnaces, such as Big River Steel, of which U.S. Steel bought a minority share in 2019, in Arkansas.

There are currently about 130 full-time workers at the three Clairton Coke Works batteries that will be idled. U.S. Steel plans to avoid layoffs by reducing the workforce through retirements and reassignments. According to Pittsburgh Works Together, a cooperative venture mostly comprised of fossil-fuel companies and the labor unions that represent their workers, the closures will result in the loss of hundreds of potential construction jobs for the region.

“I am deeply disappointed that the company has broken its promise to the Mon Valley and its own workers by scrapping a plan that would have made the Mon Valley Works the first project of its kind, provided cleaner air for our community and good jobs that would have helped this area prosper for decades,” says state Rep. Austin Davis (D-Mckeesport), whose district includes the Clairton Coke Works. “I believe that we can create family-sustaining jobs and a clean environment.”

From March 30 to April 7, the Mon Valley was one of the top-10 worst places for air quality in America. Advocates such as Barber have long criticized Clairton Coke Works’ dangerous emissions, and PennEnvironment had previously called for the batteries to be taken offline when air quality was poor.

“While we are pleased by this development, we still must remain vigilant — especially in light of U.S. Steel’s decades-long history of legal violations and broken promises,” Barber says. “Local leaders must keep working to ratchet down industrial pollution to ensure that everyone has clean air to breathe every day of the year.”

And it's possible these upgrade cancellations will have long-term effects on U.S. Steel's future in the Mon Valley and the Pittsburgh region. As University of Pittsburgh economist Chris Briem notes on Twitter, the status of the Clairton Coke Works and the Edgar Thompson Works is bleak without any upgrades to those legacy facilities.

Lest i'm being overly subtle (Not, but). There is no future for Clairton without massive reinvestment. Without Clairton, there likely is no future for the ET Works in Braddock. If West Mifflin were the only big US Steel plant in the region, does the HQ stay here?