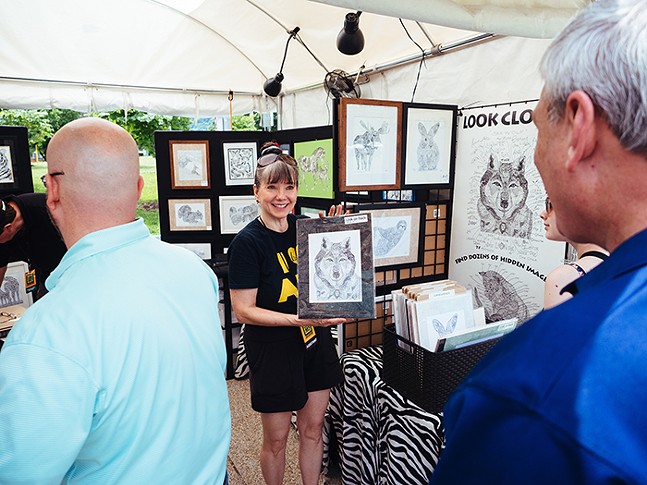 Two weeks after announcing a hybrid model for the 2021 Dollar Bank Three Rivers Arts Festival, the Pittsburgh Cultural Trust has made even more adjustments to its programming, making it more open and accessible.

Today, the Trust announced via a press release that its Featured Music Concerts at the Dollar Bank Main Stage will move from the Byham Theater to Point State Park. The shows, which, in the past, had been free and open to the public, were originally scheduled for Byham Theater in order to keep capacity limited.

In addition to having the Dollar Bank Main Stage in the Park, the Trust is also adding 30 artist market tents, six concession stands, and an information tent.

The Trust has also changed its stance on requiring timed entry tickets for many components of the festival, including the Dollar Bank Main Stage productions, Riverfront Stage shows, and Artist Market. Now guests can now simply show up to attend any part of the Festival, as long as they wear a face mask.

The updates were made based on Pennsylvania Gov. Tom Wolf's announcement that he would lift mass gathering restrictions completely by Mon., May 31.

With the promise of larger crowds, the Trust statement reads, "We have spent the last week working with our partners to adjust Festival plans in the safest way possible, to allow the most people to participate."

The Trust also announced that artist Janel Young began production this week on her street mural, to be created along a closed section of Fort Duquesne Boulevard.

The Dollar Bank Three Rivers Arts Festival is one of the largest, most anticipated cultural events in Pittsburgh, providing opportunities for crowds to view and buy art, see free live music performances, and more. On Thu., April 29, the Pittsburgh Cultural Trust announced the Festival's return to in-person events (kind of) after the pandemic moved it totally online last year.

In a Vimeo announcement, several representatives from the Trust, as well as main sponsor Dollar Bank, went over what visitors can expect as TRAF 2021 experiments with a hybrid model of both in-person and online events. TRAF will return this summer from June 4-14 with events taking place in the Downtown Cultural District and other locations.

What will be the 62nd annual festival will see the return of some favorites, including the open-air Artist Market, live music acts, and exhibitions at Cultural District galleries. However, unlike previous years, Dollar Bank Main Stage headlining music acts, which usually take place on outdoor stages, will be moved into the Byham Theater in order to keep capacity limited.

While admission is free, tickets are required and are first-come, first-served. Ticket reservations will open on May 20 at 12 p.m. (May 18 for Festival Member Early-Bird Access).

Sarah Aziz, Pittsburgh Cultural Trust Director of TRAF, explained that the organization also partnered with the Pittsburgh Downtown Partnership to host some events at the Riverside Stage at the Allegheny Overlook Pop-up Park. Located on Fort Duquesne Boulevard between Stanwix and 7th Streets, Allegheny Overlook Pop-up Park will feature local music and dance talent throughout the festival, as well as a portion of the Artist Market, which was split into three different locations in order to better accommodate social distancing (the other locations are the Benedum Center parking lot and the Downtown Trust Oasis).

While ticketing is required to enter most events, public art and gallery shows in the Cultural District will be open to the public. This includes Transverse, TRAF's Juried Visual Art Exhibition at 820 Liberty Avenue, as well as shows at Wood Street Galleries, SPACE, 937 Liberty, and 707 Penn. Masks and social distancing will still be required.

"I hope to see crowds at the Three Rivers Arts Festival this year," said Joe Smith, Dollar Bank senior vice president of marketing. He also emphasized how the city and the Southwestern Pennsylvania region benefit "culturally, socially, and economically" from TRAF.

On its website, the Pittsburgh Cultural Trust estimates that Cultural District events attract over 2,000,000 visitors annually, generating an estimated economic impact of $303 million. TRAF is a big part of that, as the festival not only provides a boon to local artists, but to the hotels, restaurants, and other businesses dependant on arts and entertainment tourism and spending.

The return of the festival, especially in-person events, would mark a progression away from the devastation the pandemic wrought on the Trust, which had to cancel, postpone, or reformat dozens of planned events. As a result, the Trust had to launch a Critical Fund in August 2020 after it spiraled into a $6 million budget shortfall for the year.

During the press event, Aziz thanked those who had donated to the fund.

"It's really been an amazing journey," said McMahon, adding that the company's loyalty to the Trust and the festival has been "phenomenal."

In addition to announcing the lineup, Trust chief security officer Kevin Wilkes also went over how new and existing health and safety precautions will affect how people experience the festival.

"Our aim is to make this process as seamless as possible while keeping you safe," said Wilkes.

In addition to limiting capacity and ensuring visitors have ample space to social distance, Wilkes said the Trust also upgraded the HVAC and air filtration systems in venues and art spaces, enhanced its cleaning and sanitation standards, and implemented contactless ticketing and entry methods. The latter includes a new security system in venues where patrons will be able to walk through without security personnel searching their bags, which are still restricted to being 16-by-16 inches or smaller.

Every guest entering a Trust venue will be required to read and agree to the new Trust Guest Pledge and download the CLEAR Health Pass app, which will verify their identity with a selfie, and require them to answer a series of health survey questions.

Those still uncomfortable with attending shows indoors will still be able to watch livestreams of Dollar Bank Main Stage performances online, which Aziz says will be presented on Trust's social media channels with "multi-camera video and soundboard quality audio." They will also be broadcast on 91.3 WYEP.
In addition, there will be an online market of over 350 vendors for those hesitant about visiting the open-air Artist Market.

Aziz and Wilkes also encouraged visitors to keep up to date on any new health and safety developments before going to the festival.
© 2022 Pittsburgh City Paper