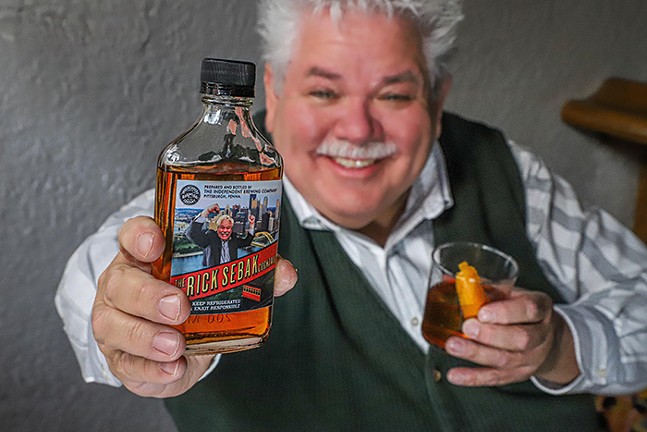 Photo: Brian Maxwell
Independent Brewing Company releases Rick Sebak Cocktail
Rick Sebak has become a beloved local celebrity for his charming documentaries about food and forgotten places in Pittsburgh and around the country. Now the filmmaker and foodie about town has partnered with Squirrel Hill-based Independent Brewing Company to create a signature cocktail for a cause.

The brewery will released the Rick Sebak Cocktail, a combination of bonded bourbon, maple syrup, and chocolate mole bitters. The cocktail will be officially available starting Sat., May 1 when Independent Brewing Company hosts a release party with Sebak doing a DJ set at the bar.

“The guys at the Independent surprised me back in 2015 when they said they had named a drink after me," says Sebak in a press release. "I was astounded and honored."

He adds that, at the time, he just made his Breakfast Special programs for PBS, and that inspired another name for the drink, A Gentleman’s Breakfast.

"I remember it was garnished with orange peel and a small chunk of candied bacon,” says Sebak.

A press release says the cocktail was previously only served on "special occasions" but will soon be sold in 6 oz. to-go bottles for delivery or in-person pickup. Each bottle is priced at $18, and $2 from each one sold will go toward supporting WQED, the local PBS affiliate for which Sebak makes many of his signature documentaries.

Bottles can be purchased ahead of time on Independent Brewing's website.

In addition to the Rick Sebak Cocktail, Independent Brewing has also released their Rock & Rye, Old Fashioned, and Negroni in to-go bottles.

The release demonstrates the relationship that has developed between the filmmakers and Independent Brewing over the course of the pandemic, as Sebak has been acting as a guest DJ for the bar on Wednesday nights, both in-person and online at Twitch.

"I have a big old collection of LPs in my spare bedroom, and I drag bags of them to the bar every week, and I’m not sure why I get such a kick out of it," says Sebak. "It’s made me far more of a regular at the IBC. The bar feels a bit like home now.”Rick Sebak Cocktail release at Independent Brewing Company. 4-9 p.m. DJ set starts at 6 p.m. Sat., May 1. 1704 Shady Ave., Squirrel Hill. independentpgh.com
© 2023 Pittsburgh City Paper