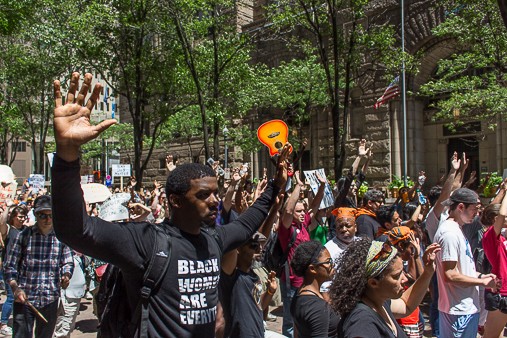 What started as a Facebook event turned into a march of hundreds in support of the Black Lives Matter movement. Protesters took to the streets of Downtown Pittsburgh on Saturday in reaction to the recent deaths of Alton Sterling and Philando Castile, two black men killed by police officers.

“It just started as me being angry. I didn’t think all these people would be out here,” said Sarafina Davis, of Pittsburgh, who started the event on Facebook. “This is my first time doing this. My biggest point I’m trying to get across is I want unity. I want anybody, cop, black, white, who kills somebody to be held accountable. Just because you have a badge doesn’t mean you have free will to kill people and just go home like everything’s cool. It’s not OK.”

The demonstration was the second Black Lives Matter march this weekend in Pittsburgh. The first on Friday was organized by attendees of the People’s Convention and was one of many demonstrations that took place across the nation this weekend. (Davis organized Saturday’s rally independently of the People’s Convention, though attendees showed up in support.)


The marchers set out from Point State Park around 1 p.m. No warning was given to Pittsburgh Police of the gathering, officials said, but they ensured the march was completed safely. The march happened just after Pittsburgh's Bicentennial parade wrapped up.

“We had plans in place for the parade of course, and this demonstration came upon our radar,” Pittsburgh Police Chief Cameron McLay told City Paper. “Fortunately the timing was really good. We got in communication with the organizers, found out what the intended plan was, held on to resources. Made it clear to event organizers that ‘OK, we get this wasn’t permitted, but it doesn’t matter because you have a First Amendment right to free speech. So we’re going to facilitate your movement, so you will see us working with you. Understand that we’re here not to box you in but to keep you safe.’”

CP caught up with the march on Grant Street as the crowd came to a halt in front of the Allegheny County Courthouse. Police vehicles stopped traffic from coming through that section of the street, allowing protesters to give speeches. Officers on foot and motorbike took to the front and rear of the crowd to escort the march.

“The recent continuous police killings of black men that are uncalled for and unwarranted — just execution of black folks — and seeing that folks said, ‘Hey, we need to do something. We need to have our voices heard,’” said Nancy Parker, who participated in Saturday’s march. “So, those who are all like-minds put this on, and everyone else showed up to participate. It’s not spontaneous. It’s caused by the violence the police are exacting on black people. It’s a reaction to the conditions that we’re facing.”

Chants of “shut down the parkway” came from the crowd as they walked toward the Parkway East/I-376 ramp. They stopped again, populating the intersection of Fort Pitt Boulevard and Grant Street. All vehicles on the exit ramp from 376 were stopped, facing the Black Lives Matter crowd.

Police were on standby at the intersection, several of the officers in riot gear. But a constant line of communication was kept between marchers and the police. The marchers’ original intent was to walk onto the ramp and halt highway traffic, but they agreed to march down Fort Pitt Boulevard instead.

As they went down Fort Pitt, select members from the crowd would stand in a line in front of stopped traffic on adjacent streets, each person holding a fist in the air and staring down the line of cars.

Marchers yelled police-related chants: “No justice, no peace, no racist police.” But speakers reiterated that Black Lives Matter is a peaceful movement. (The movement received criticism after the shootings of police officers in Dallas.)

The marchers walked the length of Fort Pitt back to Point State Park where head organizers took to the unoccupied stage and spoke to the crowd.

“We see black men dying, but we see black women stepping up,” said artist and activist Jasiri X from the stage.