We go inside the escape-room phenomenon | Pittsburgh City Paper

We go inside the escape-room phenomenon

“A little bit of stress is something that allows us to function slightly better than we’re normally used to.” 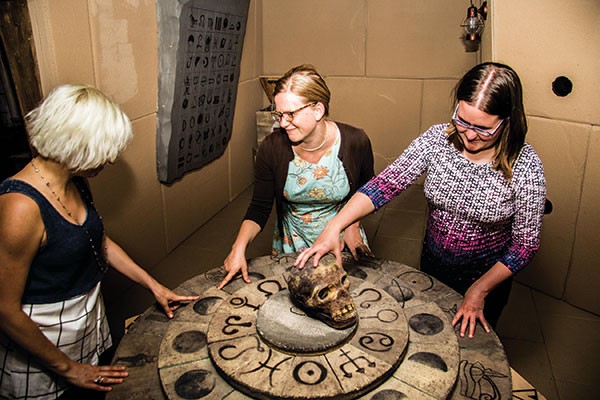 We nearly escaped. My friend and I were trying to decipher the final riddle of an ancient Egyptian tomb before our oxygen supply ran out. We had discovered secrets, solved brain-teasers and connected clues regarding an intrepid explorer’s lasting mystery, surrounded by artifacts and hieroglyphics. But time had expired. Then the co-founder of Escape Room Pittsburgh entered and told us we didn’t make it out of Tomb Explorer.

Escape rooms are not your traditional way to spend an evening. Teams as small as two and as large as 12 are locked in an enclosed space and given a time limit to find their way out. Monitors supervise each room through closed-circuit cameras to make sure things move along. Whether with hidden keys, codes or elaborate puzzles, escape rooms are an interactive attraction that blurs the lines between video-game role-playing, theme parks and movie plots brought to life. And in Pittsburgh as elsewhere, they’re a growing phenomenon.

Japan’s SCRAP Entertainment opened the world’s first escape room in 2007, in Kyoto, but didn’t bring its Real Escape Game to the U.S. until 2012. Yet by the end of 2015, there were more than 400 escape-room companies in the U.S. alone, according to RoomEscapeArtist.com, an escape-room news-and-reviews blog.

Escape Room Pittsburgh, the Steel City’s first, started in a Greenfield storefront in November 2014. On July 8, the company will open Tomb Explorer (which CP previewed during beta-testing); the Carnegie’s Millions room opens later this summer, inside the same former Homestead bank building, complete with a giant original vault to unlock.

In addition, a multi-city outfit called The Great Escape Room just held the soft opening at its new Pittsburgh location, on Forbes Avenue, Downtown; the grand opening is July 14. The Great Escape Room will feature escapes patterned after the Victorian mysteries of Sir Arthur Conan Doyle: Sherlock’s Library and Moriarty’s Game Room. For large groups, Great Escape includes the added thrill of double rooms, allowing players to race against not only the clock, but also another team.

Other local escape rooms, run by other companies, can be found on the South Side and in East Liberty, Coraopolis, Ross Township, Bethel Park, Indiana and Latrobe. Themes at such locales include: stealing a painting from a museum; escaping a broadcast newsroom; and even navigating a haunted nuclear plant. 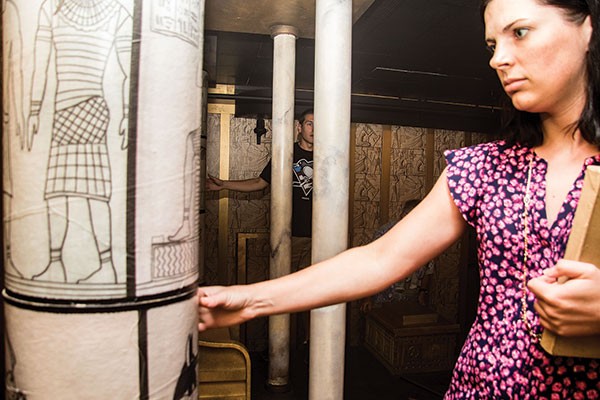 Still, according to The Wall Street Journal’s MarketWatch, Pittsburgh doesn’t approach the number of escape rooms in cities like Los Angeles (23), Budapest (63) or current record-holder Beijing (182).

“Every main city is having the same explosion we are,” says Joe Deasy, co-founder and operator of Escape Room Pittsburgh. “I just got back from an escape-room conference a couple months ago. That does exist now. And we learned a lot, but it also showed us that we’re heading in the right direction.”

What is the appeal of escape rooms? With a high-energy blend of intellectual stimulation, social dynamics and a ticking clock, the rush of solving escape rooms simply stems from an activated nervous system, says Marc Coutanche, professor of psychology at the University of Pittsburgh and himself an escape-room enthusiast. “When you have a puzzle that’s just the right level, difficult enough to be engaging but simple enough to be attainable, you get a reward boost. That feeling is mastery,” Coutanche says. “It [taps] into the same kind of reasons people do Sudoku or Clash of Clans or various other games. … A little bit of stress is something that allows us to function slightly better than we’re normally used to.”

From a business perspective, Deasy compares escape rooms to pizza parlors: While there might be many competitors, each considers itself the best. And with admission prices typically about $30 per person, price is not a huge obstacle to either first-timers or return customers.

“People are looking for something to do aside from the normal bar scene,” says Karina Koch, project manager for The Great Escape Room Pittsburgh. “It’s a fun date night. It’s not putt-putt. It’s not go-karts. As fun as those are to do all the time, sometimes you really want to use your brain when you go out.”

Koch adds that a major reason for Great Escape Room locating Downtown is the possibility of corporate team-building bookings. Indeed, a long list of global corporations have brought employees to play escape rooms, including Microsoft, Netflix and Pizza Hut.

The field has room to grow technologically, too. Carnegie Mellon University professor Drew Davidson, director of CMU’s Entertainment Technology Center, says that escape rooms in other cities are already incorporating virtual reality into their otherworldly adventures. He anticipates touch screens and both motion- and eye-tracking becoming regular features as escape rooms continue to evolve. “You could change the puzzles digitally, which could open up a quicker turnaround because you don’t have to physically adapt the room as much,” he says.

Not that escape rooms aren’t plenty enjoyable as is. As we traveled home from Tomb Explorer, for instance, my friend and I discussed the ways we could have shaved a second or two off our time, or discovered an element sooner. But like many players, we were hooked.