I’ve said it a million times and I’ll say it a million more. Women are the lifeblood of pop punk and punk music. As the line began to wrap around the block on which Altar Bar sits, I passed a wide mix of people, but it had to be noted that so many excited showgoers were women in groups with their friends, laughing and goofing off.

For those not well-versed in the politics of the pop punk and emo scene, it can be quite trying to be a woman who loves these genres of music. In her essay about emo, “Where the Girls Aren’t”, music critic Jessica Hopper points out that emo can alienate the very fan base that keeps it afloat, and that formula translates directly to pop punk.

While women comprise a great deal of the source material for these artists, it can be somewhat difficult to find women and queer musicians making pop punk, and while many women support music by going to shows, dude-dominated spaces can feel unsafe and are unfortunately rife with harassment.

It’s reasons like these that Modern Baseball created a hotline for this particular tour and why Barry Johnson, vocalist and guitarist of Joyce Manor, notably stood up against hypermasculinity by calling out a stage diver for being too aggressive with other concert attendees.
click to enlarge 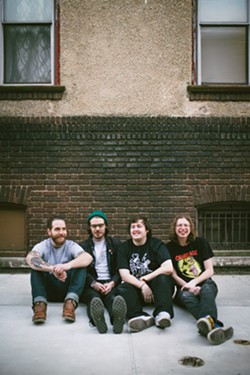 Courtesy of Jessica Flynn
Modern Baseball
At Wednesday's show, Vocalist Chrissy Tashjian of tour opener Thin Lips kicked off their set by dedicating a song to the women in the crowd, later reminding everyone of the gender neutral bathroom open for the show and calling for allies to “step up and be homies” in the wake of the Pulse shooting. As someone who spent their young life playing pop punk and feeling isolated for being both a woman and queer human, it was moving to hear so much emphasis and celebration for those like myself at the show.

On the musical side, Thin Lips set the tone for the evening with their unique brand of pop punk, a mixture of earworm vocal melodies and gnarly riffage. It’s the mix of upbeat punk with moments of darkness and edge that showcase just why Thin Lips is certainly a band to keep your eye on.

Showcasing a great deal from their latest effort, Riff Hard, they held it down with a Mixtapes-y musical leanings (read: not quite pop punk but too saccharine at moments to be straight punk) and That Dog levels of catchiness. It’s like a magical concoction of lots of good things that have happened in punk times past to create something entirely new and enticing.

The second act of the night was Joyce Manor, who was playing its first show in Pittsburgh. Johnson addressed the crowd during the set saying, “Sorry it took us three records to get here.” I’m sure the band had to be aware of their popularity in the ‘Burgh, as some locals had created a “Joyce Manor skips Pittsburgh again!!” event page during its Never Hungover Again support tour.

The crowd definitely didn’t hold it against the band. From the moment that it tore into “Heart Tattoo,” the floor of the venue was literally bowing and bouncing under the pressure of a sold-out crowd getting off its feet.

JM may be a noisy punk band with pop elements, but don’t be fooled by the punk image and distortion pedals; this band is musically tight and incredibly cohesive. The group’s Bassist Matt Ebert fills out the sound so well with the high-end vocals, and the dual riffing, as showcased on songs like “Schley,” comes across magnificently live.

The band members perform most songs a little bit or much faster than the recording, which kept the crowd surging and buzzing as they shouted along. The full band version of “Drainage” was hauntingly heart shattering, leaving me with goosebumps. There were moments in which the crowd almost overpowered the vocals, a sea of emotionally-charged fans crying out “Everything reminds me of you,” during “Beach Community” and belting the final verse in “Constant Headache” with awe inspiring fervor. The set was well worth the three-record wait.

Another magnificent characteristic of pop punk that Joyce Manor and Modern Baseball shows reveal is the ability for this kind of music to dismantle unfeeling machismo in favor of emotionally raw and honest lyrics about having feelings. Folks all the way across the gender spectrum were blatantly moved by Joyce Manor’s set, openly crying as they sang along.

And if Joyce Manor has the power to move people to tears, Modern Baseball has the power to make people let down their walls and be an honest version of themselves. “Holy crap!” Brendan Lukens charmingly exclaimed early in the set, shocked at the passion of the crowd. People were so consumed in the music and singing along to concern themselves with looking cool.

Modern Baseball’s live show has bit of a messier feel, but it suits the style of the music well. It isn’t sloppy, but it reminds you that you’re experiencing live music and not something that has been recorded and re-recorded over and over. Lukens mic definitely could have been louder, but the harmonies still cut through clear and full, soaring over the jangling, infectious riffage.

MoBo’s music is intimate and confessional, and the crowd responded with a raw energy and sincerity. The floor continued to bow, surging back and forth as MoBo barreled through newer tracks from Holy Ghost like “Wedding Singer” and older hits like “Fine, Great,” “The Weekend” and “Rock Bottom.” The set ended with “Your Graduation,” pulling the crowd to operate as one giant wave of passion.

While the pop punk community as a whole definitely has some shit to sort out, Thin Lips, Joyce Manor and Modern Baseball are proving that pop punk is still electric, and pop punk that is genuinely inclusive is invincible. 10/10, would catch this gig again.