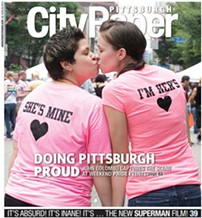 Yes, we know that the word “HER’S” on the woman’s shirt should not have an apostrophe. And yes, a lot of readers and social-media monitors made a big deal about it. But you know what? To hell with grammar when love is in the air. Still, that’s not why we’re featuring this cover from June 19, 2013. Most years, we run a photo from Pittsburgh Pridefest on our cover, but it turns out this one was historic, although we wouldn’t know that until 11 months later, when same-sex marriage was legalized in the state of Pennsylvania. This cover is historic because it documents the last Pridefest held without marriage equality. Here’s hoping this year’s cover was the last Pridefest without discrimination protections for the LGBT community.

City Paper’s Summer Film Preview had the lowdown on the blockbusters hitting the multiplexes. But aside from blurbs on instant classics like Demi Moore’s Striptease and Robin Williams in Jack, writer Ana Cottone took a look at the city’s indie film scene from the inside. Cottone played a murder victim killed by special-effects guru Tom Savini in a low-budget production called Eyes That Are Upon You. But director David Goldberg explained: “What we’re doing is a low-budget horror movie, but that doesn’t mean low quality.” Added Garry Kemper of a local film-consulting firm: “I say this is our next big industry.”

Staff writer Rich Lord investigated whether the city’s public-housing policies are helping the city’s poorest residents find new homes in mixed-development neighborhoods (those including both houses subsidized for low-income families and houses at market value). Part of the city’s plan included demolishing 32 government-owned housing communities and finding homes elsewhere for the 14,000 residents who would be displaced. Many were already left behind in boarded-up, rapidly decaying projects that were becoming ghost towns. Don Harris, a consultant for the residents of Broadhead Manor, one of the low-income communities, was skeptical. “They’re living in hell,” he said. “And the city is in no hurry to resolve this, because the worse it gets, the more it suits their agenda.” If you wonder how the city’s plan worked out, check out one of our stories from last year about the city’s affordable-housing shortage.

It’s hard work filling up a paper every week, so sometimes you get creative. Hence, “The Smell Issue.” According to the issue’s intro: “Smells. Like our history, geography and skyline, Pittsburgh’s smells are Pittsburgh’s alone, but who’s going to document them? Someone with a nose for news, that’s who.” CP’s staff promised to “sniff out the best and worst of Pittsburgh’s smells.” Chris Potter checked out Pittsburgh’s historical odors — from the sulfur-laden coal and the stench of post-World War II cesspools to the meat-packing industry on Herr’s Island. Bill O’Driscoll tracked the county’s odor complaints, and Frances Rupp asked some high-profile Pittsburghers what kind of fragrance they wore to make them smell nice. Those answers ranged from former Pittsburgh Mayor Sophie Masloff wearing Opium sparingly “because it’s very expensive,” to long-time activist Vince Eirene, who wore none because “Cologne is bourgeois,” and instead applied “Arm and Hammer deodorant to all of my body hair.”

It seems like astrologer Rob Brezsny’s column has been running in this paper just about as long as we’ve been around. Well, this week he wasn’t only on the inside. Brezsny had just written a new book called The Televisionary Oracle, and was featured in an in-depth interview with writer L.L. Kirchner. She asked Brezsny about his self-designated title as a “Fuckmaster,” due to his knowledge of the tantric arts. But apparently tantra is about more than just “making love.” Said Brezsny, “So many people believe that erotica and tantric arts are all about sexuality, but only a very tiny percentage is about making love.”

For many years, one of the paper’s most popular features was our reader-written column called Rant. In it, readers could write up to 700 words about something they hated. This week’s was extra-special. Heidi McDonald, of Edgewood, went on a tirade over Kennywood’s decision to change its “scary” boat-in-a-tunnel ride — The Old Mill — into a commercialized, boring excursion featuring Garfield the cartoon cat. McDonald remembered fondly a childhood ride through the attraction — then called the Haunted Hideaway — when “my dad’s girth caused the boat to be stuck when he sat in the back; he had to get out and push the boat.” But more than that, the author was sad that the venerable park felt the need to change the ride, just because it was getting old. “What does it say about our culture when a ride isn’t exciting or innovating unless it caters almost exclusively to instantly gratified TV-watchers and 3-D video-gamers.”

Staff writer Adam Fleming dove into the world of online home sales after several out-of-towners bought property in Pittsburgh through online deals that seemed too good to be true. Turns out most of them were. Tami Twidwell, of Oregon, for example, couldn’t believe the inexpensive home prices here, so she bought three homes and hoped to fix them cheaply and collect rent. But the homes in McKees Rocks, Mount Oliver and Allentown were not what she expected. “We went out there at Thanksgiving [2006] and I just cried because they were just all wrecks.” Twidwell sued the former property-owners, claiming “intentionally concealed material defects” on the homes. Most of the charges were dismissed because the lawsuit was filed outside of the statute of limitations. No action has been taken on the remaining charges since 2012.