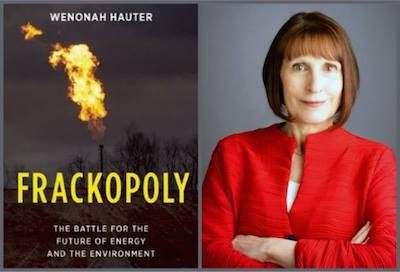 Wenonah Hauter has been entrenched in policy for a long time. As the founder and current director of  the advocacy group Food & Water Watch, she helped organize to ban fracking in New York. Since 1989, she served in the upper echelons of three environmental-advocacy organizations, and now she's debuting her second book on regulations that create industry monopolies. In Frackopoly: The Battle for the Future of Energy and the Environment, Hauter walks readers through the history of policies governing the industry and introduces various players that created fracking's ubiquity today. (Her first book was titled Foodopoly and looked at big industry and food policy.)

Fracking, or hydraulic fracturing, is the practice of injecting a mixture of water, sand and chemicals deep underground at high pressure to release oil or gas trapped in rock formations there.

City Paper caught up with Hauter by phone before she speaks in Pittsburgh tonight in a free event at the Pittsburgh Theological Seminary.

Why did you decide to write this book?
I've worked on energy issues for a long time and have been interested in how we ended up with the energy system that we have today, so I decided to write a book that both looks at the history of the oil and gas industry and the politics that have led us here today. I especially highlighted the grassroots movement that’s emerged to ban fracking.

In Western Pennsylvania, people often talk about fracking in the Marcellus Shale because we live right on top of it. But you went around the world and the country and looked at fracking in other places. Can you talk about that?
Fracking was developed in the U.S. and was transported to other places in the world, even through our State Department, which promoted fracking. First [fracking] was for energy independence here in the U.S., and then when the price of oil and gas fell, it was about working with allies around the world to stabilize prices.

But one of the things I learned when writing Frackopoly was that from the very earliest days of the oil and gas industry to the monopoly that John D. Rockefeller had, the oil and gas industry has had constant booms and busts. Overproduction is just the story. ... In our view, this was just irresponsible to frack at such a rapid rate. It’s a number of technologies that come together that make it possible to go deep underground or deep under the ocean to loosen up oil or gas. One of the misconceptions is [that] fracking is mostly for natural gas, but over the last several years fracking has been used 80 percent [of the time] for oil.

You mentioned that fracking was developed here and then exported all over the world. This has actually come up in the presidential campaign. Did you get into how presumptive Democratic nominee Hillary Clinton was involved in advocating for fracking in other countries as Secretary of State?
Yes, I do mention it in the global section, [but the book] was finalized earlier this year, so I haven’t talked a lot about the presidential election. But I did talk about the secretary’s term as Secretary of State, and she definitely sent representatives and, in some cases visited herself, to places like Bulgaria and Romania. Bulgaria’s congress banned fracking, and the State Department was very anxious to see that policy undone. We often see this with a number of industries where the State Department is actually used as an instrument to benefit U.S. corporations.

What are the examples of public policies across the nation that paved the way for fracking's popularity?
There are a lot of ways that environmental regulations have been manipulated to help the oil and gas industry over the last several decades. But I also wanted to talk about some of the other policies that aren’t on those people’s radars. The price of natural gas was deregulated beginning in 1978. For decades before that, the price of gas was determined by the Federal Power Commission, [which] also determined if a new pipeline needed to be built, and [producers] were regulated on cost of production and transporting the gas. [Former President] Jimmy Carter create[d] the Department of Energy and then as an agency inside of [it], the Federal Energy Regulatory Commission. So you can see this is really technical stuff. This was followed up by the deregulation of electricity markets. …

And then there were other major things, the Energy Policy Act of 2005. We often hear about the Halliburton Loophole, which exempted fracking chemicals from disclosure or regulation under the Safe Drinking Water Act. What we don’t often hear about is FERC’s power being expanded so they could condemn land and force people to allow pipelines or transmission lines to be built. And then one very important other thing that happened [in 2005], the Public Utility Holding Company Act of 1935 was repealed. That was legislation directed at making electric and gas utilities behave responsibly because a big reason for the 1929 crash was terrible irresponsible speculation, the kind of speculation that we’ve recently seen in 2008 and 2009 that crashed our economy. When that was repealed, it allowed electric utilities to become giant.

It sounds like you walk readers through a trail of legislation that led us to today.
What I do in Frackopoly, I go through the personalities because this is wonky stuff. I talk about who they were, who made this happen. I talk about some of the recent personalities, people like the late [Chesapeake Energy executive] Aubrey McClendon, who just died very mysteriously, and a number of other people. And I was journalistic in doing it. Obviously I have a political agenda. I don’t pretend that I don’t.

Are you a journalist by training?
No I’m an anthropologist, but I’ve been writing for years. I like the facts to speak for themselves. Especially on this issue, you don’t need a lot of rhetoric. Just look at the facts. I really meticulously footnoted this book because I expect it will be controversial.