Mexican immigrants in Pittsburgh and across the country are trailing other foreign-born citizens in getting U.S. citizenship | Pittsburgh City Paper

Mexican immigrants in Pittsburgh and across the country are trailing other foreign-born citizens in getting U.S. citizenship

“There needs to be more of an effort to help immigrants from Mexico naturalize.” 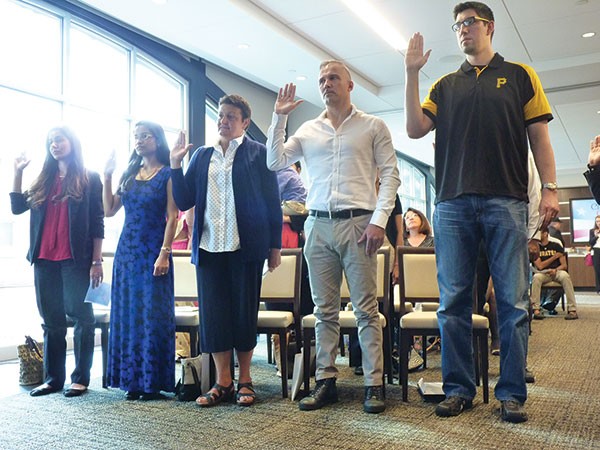 The Pittsburgh Pirates hosted their first-ever naturalization ceremony last week at PNC Park. One of those new citizens was Luis Guzman. He came to the U.S. from Ecuador 16 years ago, played two years of college basketball at Robert Morris University, and has been in Pittsburgh ever since. Wearing black and gold to the ceremony, Guzman says he really felt like a Pittsburgher after being swept up in the Steelers’ 2005 Super Bowl run.

“This country has given me so much,” says Guzman. “It has not always been easy, but with hard work, you can make it happen.”

But immigrants from one country were conspicuously absent from the ceremony: Mexico. Mexicans represent the largest population of naturalization-eligible immigrants in the U.S. In the Pittsburgh region, the numbers of foreign-born Mexicans are significantly below the national average, but they still comprise the fifth-largest foreign-born group, according to U.S. Census data.

Jacqueline Martinez, a lawyer for JBM Immigration Group, points out many possible reasons that Mexicans naturalize at lower rates. She says many have received less education than other immigrant groups by the time they enter the country. There is also less pressure to learn English, since Mexicans tend to congregate and mostly communicate with each other.

Martinez also says many Mexicans believe that after making some money here in the States, they will return to their hometowns. But in reality, she says, many Mexicans have grown roots in Pittsburgh, and have become the fastest-growing foreign-born demographic in the region.

She says leaders in the area can do more to help. “There needs to be more of an effort to help immigrants from Mexico naturalize,” says Martinez.

One of the study’s authors, Ana Gonzalez-Barrera, says that Mexicans naturalize at the lowest rates of any immigrant group, even though they represent the largest portion of the country’s foreign-born population. Gonzalez-Barrera says some Mexican immigrants in Pittsburgh might have crossed the border illegally, which could be contributing to the area’s low figures. But undocumented immigrants aside, the Pew study shows that nearly two-thirds of the country’s 5.4 million legal Mexican immigrants have not gained citizenship.

Juliet Choi, of the U.S. Citizenship and Immigration Services, says that the USCIS doesn’t focus on citizens from one particular country for the naturalization process, but tries to make sure outreach strategies are as culturally and linguistically accessible as possible. Choi adds that, last December, USCIS started providing free online practice exams to ease the anxieties of naturalizing immigrants. She also encourages immigrants to contact and visit their consulates. However, while there are 44 Mexican consulates in the U.S., the closest to Pittsburgh is more than 250 miles away, in Washington, D.C.

According to a survey of Mexican immigrants in the Pew study, the top reasons for Mexicans not starting the naturalization process are language barriers, lack of confidence in passing the civics test, lack of interest and financial limitations.

To help ease that burden, the Allegheny County Bar Foundation, a consortium of legal professionals, is developing a program to train volunteer lawyers to help low-income immigrants complete their citizenship applications. This program is part of the John A. Meehand Citizenship Institute, named in honor of Martinez’s late husband, which will also provide a citizenship curriculum that encourages new citizens to be active in government.

As part of Mayor Bill Peduto’s Welcoming Pittsburgh initiative, the city has held naturalization ceremonies in the City-County Building, during the Open Streets days and at Schenley Plaza. Betty Cruz, of Welcoming Pittsburgh, says that it’s all part of an effort to remind immigrants that they are embraced by the city. The administration plans to hold about five public naturalization ceremonies each year.

“It’s all about better connecting our residents to the city,” says Cruz. “They are Pittsburghers.”

Cruz says she wasn’t aware of the lower naturalization rates among Mexicans, but points to the June 18 Citizenship Day, where the city will offer free legal services and naturalization prep courses at the Goodwill of Southwestern Pennsylvania, in Lawrenceville.

“Part of the goal is to inform citizenship-eligible residents who are unaware of the steps to take [to get naturalized],” says Cruz. “We are building that awareness, so they can find resources they need.”