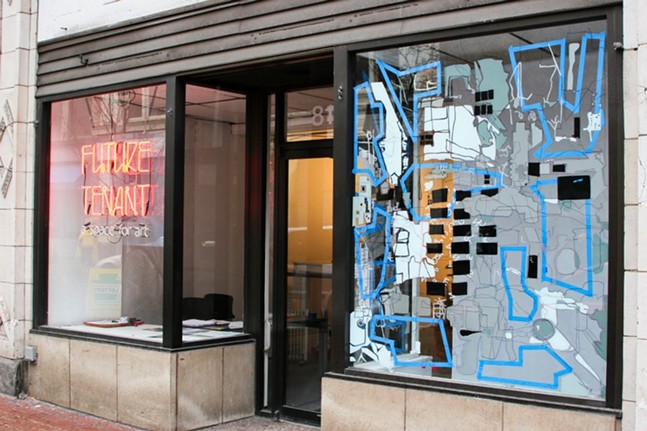 Photo: Future Tenant
Future Tenant gallery in Downtown Pittsburgh, 2012
A long-running art project in Pittsburgh has announced it will shut down after nearly 20 years of operation.

Future Tenant, which describes itself as "the flagship experiential learning initiative of the Masters of Art Management program at Carnegie Mellon University," revealed on its website that it is "sunsetting."

The announcement goes on to read, "In early May, all Future Tenant assets, including our website and social media, will close." A spokesperson for the project says the Future Tenant gallery located in Downtown Pittsburgh has been closed since April 2019.

Future Tenant was founded in 2002 as a joint project of the Pittsburgh Cultural Trust and CMU's Master of Art Management College of Fine Arts program. Since then, it has provided opportunities to arts management graduate students and emerging artists and performers interested in "exploring the limits of the creative expression, presentation, and interpretation of various art forms," according to the Trust website. Its offerings have included everything from guest curator and residency programs to open mics and play festivals.

"Future Tenant drew its name from its original purpose — to activate unused downtown space to promote the arts," says a Facebook post from April 1. This includes the Downtown Pittsburgh gallery Future Tenant has occupied at 819 Penn Ave., made to resemble an unfinished storefront and distinguished with a bright, highly photographable neon sign.

The project has expanded beyond Downtown, however, by partnering with Bakery Square in Larimer, the Children’s Museum of Pittsburgh, and the arts program at Pittsburgh International Airport. The Future Tenant gallery also presented groundbreaking work like Lucky After Dark: Gay and Lesbian Nightlife in Pittsburgh, 1960-1990, the first exhibition for The Pittsburgh Queer History Project, an initiative launched to preserve images of the city's bygone LGBTQ after-hours party scene.

Photo: Future Tenant
Drive By Drag performs during the Lucky After Dark exhibition at Future Tenant, 2014
The post goes on to claim that Future Tenant's programming has benefitted "hundreds of students and artists."

Future Tenant does not go into detail as to why the decision was made, only saying, "Between a considered evaluation of the initiative’s goals and a shift in student interests, the time is right to reimagine how students in the MAM program can best support local artists and their communities."

Dane Horvath, a local artist, UX designer, and founder of the blog My City Anthem (formerly Steeltown Anthem), remembers working with Future Tenant and sees its retirement as a major loss for the local arts community.

"I feel sad that we will be losing such an important art space," says Horvath. "It's provided me with creative inspiration from the exhibits they have put together over the years and gave me the opportunity to curate a collage show back in 2016. "

While Future Tenant might be leaving for good, the project wants to leave a legacy behind in the form of an archive. The current Future Tenant team is compiling past programming to "exist as a publicly accessible artifact and resource for future students and artists," all of which will be available online at CMU's Kilthub. Those who have worked with Future Tenant and would like to submit something for the archive in the form of image, video, or audio files can do so via an online submission form.
© 2022 Pittsburgh City Paper