Front Porch has put together a cast of powerhouse voices 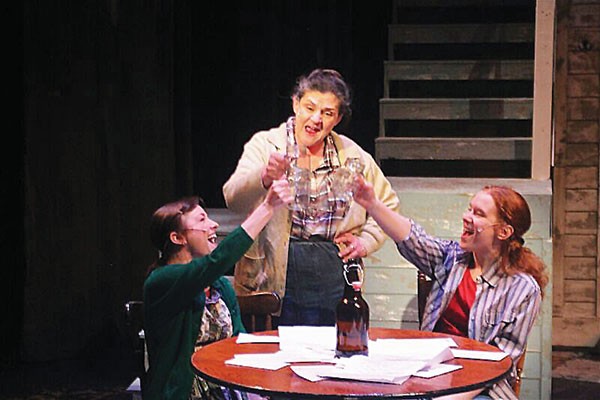 Coming out of nowhere three years ago, Front Porch Theatricals zoomed to the top of the local theater charts thanks to high production standards and top-drawer talent. The company’s latest, The Spitfire Grill, cements that reputation.

The show, based on a 1998 film, opened off-Broadway … on Sept. 7, 2011, which might partially explain why the critics were attracted to this blatantly feel-good adaptation, with music by James Valcq, lyrics from Fred Alley, and both writing the book.

Percy, a young woman straight out of prison, shows up in a nothing town called Gilead and gets a job at the titular café run by a crusty but benign proprietor named Hannah who, like the customers and the town itself, seem down for the count. Through some not particularly plausible plotting, Hannah and Percy create a nationwide raffle, offering the Spitfire to whoever writes the best essay explaining why he or she should win.

I don’t want to give away too much, but rest assured that hearts are warmed. (And fans of the movie, be aware that the musical has a radically different ending.)

Valcq and Alley have provided a bluegrass-tinged, folk-fueled score; the music is beautiful, if oddly unmemorable. And there’s a lot of it — people in Gilead sure like to sing about their problems.

With so much music, it’s a blessing that Front Porch has put together a cast of powerhouse voices and a thrilling band led by Deana Muro. Lindsay Bayer, as Percy, soars with her gorgeous, expressive pipes. Erin Lindsey Krom and Clay Singer turn their numbers into musical bliss and, as comic relief, Becki Toth lands every joke.

Terry Wickline and Matthew J. Rush provide welcome grit to the script’s unfortunate tendency toward sentimentality. There’s another character with no lines who expresses his pain through the miracle of dance. I’m not sure whether it’s the work of the writers or the director, but it’s at odds with the rest of this “kitchen sink” musical.

If this was the choice of director Rachel Stevens, it’s her only ill-advised one of the evening. This is a tightly paced show, and Stevens never misses an emotional, or musical, beat. It’s thanks to her that Front Porch has another hit on its hands.