By Alex Gordon and Ashley Murray 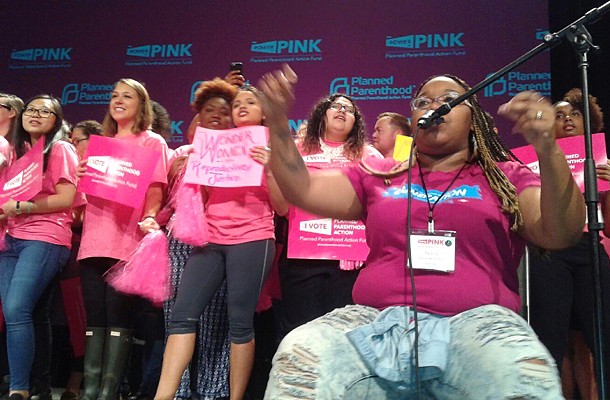 "I'm here to reduce the stigma surrounding women's health," said Stephanie Reynolds, of Pittsburgh, who dressed in a birth-control-pill costume for the rally.

Reynolds was among nearly 1,000 volunteers this weekend, both local and from across the country, who attended the Planned Parenthood Action Fund's national membership conference in Pittsburgh. The two-day event, dubbed "The Power of Pink," trained members on community organizing, media strategies and engaging the public on issues of reproductive and women's health in the months leading up to the election.

Richards fired up the crowd by listing the names Republican presidential candidate Donald Trump has called women, "bimbos, dogs, and that's just the tame stuff, and we're not going to stand for it."

She called the upcoming election a "turning point." And, acknowledging the split between supporters for Democratic presidential candidates Bernie Sanders and Hillary Clinton, said, "We didn't all start out backing the same candidate, but in the end we're fighting for the same thing." Planned Parenthood has endorsed Clinton.

Many of the speakers railed against increased regulations on abortion providers, like the situation in West Texas;  the prohibition of federal funds being used for abortion services; violence against abortion providers, including last year's shooting in Colorado; and discriminatory laws against transgender individuals, citing North Carolina's law regulating bathroom choices.

"Health care is personal," Fitzgerald said to the crowd. "Mr. Trump and his friends are the party of limited government ... except when it comes to women's health."

Last week, Trump promised that if elected, he would appoint Supreme Court justices who would vote against Roe v. Wade.

The conference program instructed volunteers to text "PINK" to a specified number to connect them to their Senator; it also included a script that volunteers could read to their senators, urging "my senator to do their job, and move forward the nomination process for Judge Merrick Garland."

According to a USA Today article published this weekend, Planned Parenthood plans to spend $30 million during this election cycle, the most it will have ever spent during an election.

And Richards summed up her determination to the crowd: "You know what we're going to do? Any damn thing it takes. Together we are going to dismantle the patriarchy and build the nation we deserve."