A preview of the seventh annual newMoves Contemporary Dance Festival 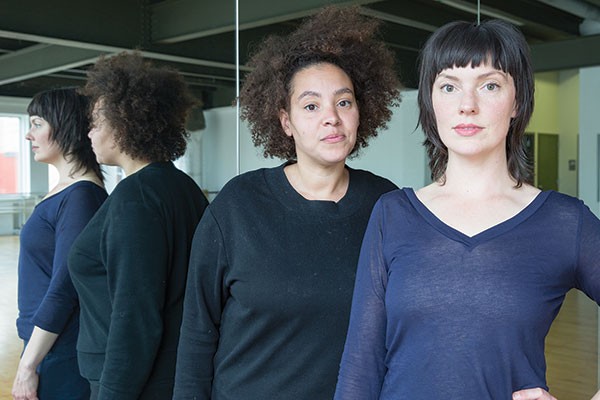 Photo by John Altdorfer
Artist Alisha B. Wormsley and dancer and choreographer Jil Stifel are collaborators on “the secret of hiding,” part of the newMoves Contemporary Dance Festival.

In its seventh year, the Kelly-Strayhorn Theater’s newMoves Contemporary Dance Festival remains one of Pittsburgh’s most important annual dance events.

“It is the thing that has gotten us national attention,” says Kelly-Strayhorn executive director Janera Solomon. “We have access to great artists, and we have audiences who really care about we are doing.”

Artists remain enthused, as well. This year, says Solomon, there were more than 70 applications from artists around the country for the three-day event, May 12-14 at KST and its Alloy Studios. Yet while the festival has continued to grow, funding remains a challenge. So far, for instance, budget constraints have meant limiting participation mostly to local artists and national acts from the Northeast and Midwest.

Headlining this year’s festival is New York City-based dancer/choreographer Marjani Forté, whose being Here/…this time runs May 13 and 14 at the Alloy Studios. The hour-long multimedia piece, partially developed during a 2014 residency at KST, is the third in a trilogy of works themed on the intersection of mental illness, addiction and systemic poverty. The thought-provoking trio, with dancers including Pittsburgh-based Jasmine Hearn, is set to a surround-sound-style score by Everett Saunders.

In addition to these nightly performances, newMoves will offer dance workshops and master classes, as well as pre-show mixers and a closing party on Sun., May 15. (See www.kelly-strayhorn.org for details.)

Moreover, this is the first festival to use KST’s new pay-what-makes-you-happy pricing: Audiences literally set their own admission charge.

Here’s a rundown of the other performances:

Program A (8 p.m. Thu., May 12). Pittsburgh-based dancer/choreographer Jil Stifel teams with interdisciplinary artist Alisha B. Wormsley on her new work-in-progress solo “the secret of hiding.” Says Stifel, “It looks at the way that humans conceal their authentic selves and deepest desires.” Another local collaboration pairs modern dancer Moriah Ella Mason with hip-hop artist Mario Quinn Lyles in “Frayed Harmonies.” The duet explores the similarities and differences in the movement aesthetics of both.

Set to an original score by Rob Traugh, choreographer Brady Sanders’ “On the Other Side of Fear,” he says, “exposes the counterintuitive relationship between the courage needed to embrace failure and daring for success.” Completing the program is returning New York-based dancer/choreographer Gabrielle Revlock’s “I replaced him with a lamp.” The self-portrait in dance reflects on Revlock’s strong feelings over the ending of a professional relationship.

Program B (9 p.m. Fri., May. 13). This program is loaded with festival first-timers, including Cherish Morgan, who will present her new group work “running,” which is about facing one’s fears. Program B also features a fellow first-timer, New York-based dancer/choreographer Kensaku Shinohara, whose contemporary-dance group work “monster” is a movement response to a score by Slovak composer Viera Janárceková.

The festival’s lone international participant, Toronto-based dancer/choreographer Jasmyn Fyffe, makes her newMoves debut in “corridor,” a solo exploring claustrophobic feelings that relate everyday life to the confines of a hallway. Back for her third time at newMoves, Alexandra Bodnarchuk’s trio “take your skin off and put it on the floor” is about the pressures female dancers feel trying to live up to unattainable body-image ideals.

Program C (9 p.m. Sat., May. 14). PROJECT 44 artistic director Gierre J. Godley, based in New York, returns to newMoves with “Gandy Dancer.” The trio for three male dancers was inspired by African-American railroad workers of the early 1900s who used songs and rhythms to coordinate movement.

Vermont-based Christal Brown makes her festival debut in “What We Ask of Flesh,” set to music by Farai Malianga. The former Urban Bush Women dancer says that this “solo draft,” in collaboration with poet Remica Bingham, “is about how the body is perceived in and out of time.”

Rounding out Program C are festival newcomer Jean-Paul Weaver’s solo work “Gri” (Creole for “gray”), which examines the intersection of queerness and spirituality through the lens of voodoo culture, and newMoves regular Jamie Murphy’s group work “Words on Lost.” Murphy says she “created a movement alphabet that the dancers use to spell out phrases indicating feelings of being lost or trapped.”