By design, Quantum Theatre has staged plays in dozens of interesting and unlikely places over its 26 years. (In fact the troupe has created a contest and nifty interactive map to honor that legacy.) 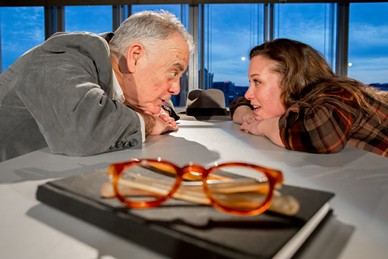 Photo courtesy of John Altdorfer
John Shepard and Hayley Nielsen in "The Master Builder"
But fans of the urban landscape will be especially thrilled by the venue Quantum has arranged for this Ibsen classic: The view from the ninth floor of Building Two of Nova Place (formerly Allegheny Center) alone is worth half the price of admission.

The former office space in the recently sold complex has been stripped bare, meaning a short walk around the perimeter gets you a 360-degree low-flying-bird’s-eye view of Pittsburgh that’s centered a few blocks behind PNC Park. Arrive early for a daylight perspective. My favorite vantage lets you gaze across Deutschtown and up the Allegheny valley all the way to UPMC Children’s Hospital on the Lawrenceville hillside, and beyond.

The play, meanwhile, is staged before the windows that look out on the Downtown skyline, and the wraparound windows take full advantage of the dusk that descends throughout the first of three acts (for performances starting at 8 p.m., which most of them do).

Dusk descending is also an apt metaphor vis-à-vis Ibsen’s script, which grapples with mortality, the notion of legacy and the fear of obsolescence that grips Halvard Solness, an aging architect with a wandering eye.

The play is knotty, as Ibsen tends to be; after the show, I had a fruitful discussion with a fellow attendee about whether the whole story had taken place in Solness’ head, the other characters merely manifestations of his own psyche. But Master Builder will definitely get you thinking; indeed, a week after seeing it, I feel like I’m still processing.

For another take, here’s Stuart Sheppard’s review for CP.

The Master Builder has four more performances through Sunday.

Tickets are $38 and are available here.