What happened to plans for a public market at the new Strip District development? | Pittsburgh City Paper 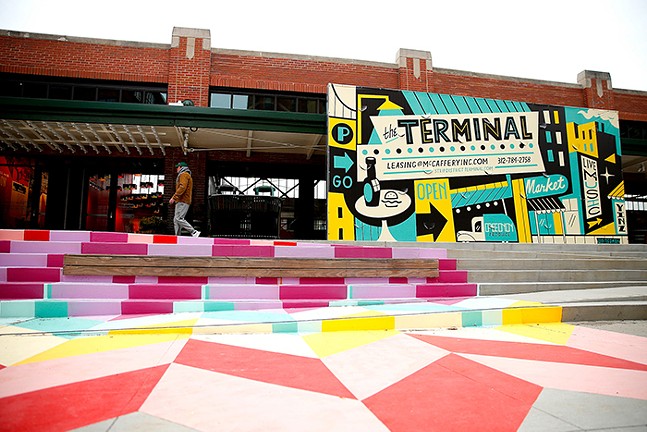 CP photo: Jared Wickerham
The Terminal building in Pittsburgh's Strip District neighborhood
Pittsburgh has a lot of advantages over its Rust Belt cousins. Public transit is better in Pittsburgh than Cleveland. Pittsburgh is more walkable than Detroit. Its sports teams aren’t embarrassments like in Cincinnati.

But one area where all those cities put Pittsburgh to shame is having a great public market. Westside Market in Cleveland is a gem, Findlay Market in Cincinnati is a delight, and Eastern Market in Detroit is lovely. All offer permanent buildings that house scores of booths, tables, and businesses selling mostly locally-grown produce or products created and sold by locals.

There used to be a public market run out of the old Produce Terminal building in the Strip District, and one that later migrated up Penn Avenue. But the Pittsburgh Public Market closed in 2016, and it hasn’t been replaced. In the Strip District along Penn Avenue, there are scores of shops, cafes, and produce vendors, but Pittsburghers still have a desire where vendors like these can be combined into one location, and where different shops can be visited without worrying about dodging traffic.

So when plans started to materialize a few years ago for a big redevelopment project at the Produce Terminal building, a block from Penn Avenue on Smallman Street, a new public market became a bit of a priority. And developers were eager to get on board. One of the initial bidders for the development, Rubino Development Group, specializes in public market projects and pitched one to Pittsburgh’s Urban Redevelopment Authority.

Rubino didn't win the URA bid, but even the winning developer, McCaffery, vowed to include some kind of public market as part of its development. Those plans were codified into the disposition contract and Memorandum of Understanding (MOU) between McCaffery and the URA in 2017.

But with McCaffrey's “The Terminal” development now well under way, and tenants filling up the long building — including a new Fine Wine & Good Spirits location and a golf instructor store called OnPar Now — questions remain about where and when Pittsburgh is getting some kind of public market. Interviews with McCaffery point to something coming soon, but details about exactly what are convoluted. The URA told Pittsburgh City Paper it will enforce the terms of the contract, but then said later it wasn’t accusing McCaffery of failing to meet those conditions. It all points to uncertainty about what kind of public market Pittsburgh is going to get.

Matt Buchholz is a local artist who runs Alternate Histories, which produces greeting cards and other products that he sells at local stores, crafts fairs, and markets. When Buchholz reached out to McCaffery in February asking about plans for a public market, he says they told him there were no plans to include a public market in the development at the time.

When City Paper first reached out, a McCaffery spokesperson said that the developer plans to host “several community-built pop-up events.” The McCaffery spokesperson also said the building will be offering markets held four hours a day, once a month, where local vendors can sell their products. This appears to be like a farmers market that would happen on the sidewalk and walkways of the Terminal building. When asked if there would be a permanent market location, the spokesperson said the Terminal currently “does not have plans for a permanent market.”

For Buchholz, not including a public market at the Terminal building would be a disappointment. He also notes that the Produce Terminal building’s original purpose was to function as a market, and he believes that local vendors, makers, and artists should be an integral part of the new development and not just “window dressing.”

"It's extremely frustrating to hear that the Terminal development won't have any kind of permanent public market,” says Buchholz. “This is something that Pittsburghers want and that the building was literally built for. Virtually every other major city within a five-hour radius has some form of public market, but here we've traded away that legacy to developers who are more concerned with filling the space with out-of-town concerns than working with locals.”

According to the MOU between McCaffery and the URA (which is shared at the bottom of the this story), a “food-centric” public market of at least 20,000 square feet will be included of Phase 1 of the development, and will be located at the 16th Street side of the Terminal building. That market will fulfill a mission statement that will “have a strong commitment to the artisan food community” and the development will “contain businesses and events that are representative of local and regional merchants and the character of Pittsburgh, and that present the produce of local farms.”

Even though McCaffery’s initial response said there were no current plans for a permanent public market, it’s still unclear what that means for the Terminal. Emails from the URA and phone calls with McCaffery’s CEO indicate that the decision isn’t final.

After receiving word from CP that McCaffrey had no current plans for a permanent market, URA spokesperson Gigi Salada said in an email that the disposition contract states that McCaffery will make “commercially reasonable efforts” to include within the premises of the development a “food centric” public market.

“We understand that these are uniquely challenging times, and we look forward to working with McCaffery to ensure that they are making appropriate efforts to meet their commitments,” wrote Salada. “As with all of our projects, the URA intends to enforce the terms of our signed disposition contract.”

CP photo: Jared Wickerham
In a phone call, Dan McCaffery, CEO of the Chicago-based developer, initially said “there is not anything that I have ever inferred or committed to that I have not lived up to or that I am not going to live up to,” and then directed CP to read the MOU and disposition contract.

In a later phone call, McCaffery said his company is pursuing a food-centric market, but said that it has been difficult to find one willing to move in. He said that in the time that it will take to place a market in the Terminal, he promised to fill the space with local vendors for no charge.

“There is not a food centric market that is breathing life right now,” said McCaffery

It’s unclear what exactly the interim situation will look like and also unclear what kind of “food centric market” is being sought for the west side of the Terminal. The development has already drastically improved conditions on Smallman Street. The walkway along the building is wide, multi-tiered, and has small parklets for sitting. One side of the street now has back-in, angled parking to ensure safer driving speeds. There are also bike lanes running down the section of Smallman Street. It’s a far cry from what Smallman used to be: a giant parking lot that encouraged a free-for-all among drivers.

In addition to the liquor store and golf instructor, the Terminal is now home to locally-based garden store City Grows. And the development will also be hosting future offices of some tech companies.

McCaffery says there is no conflict over including a food centric market in the Terminal and that he is working in concert with city officials. He also notes that McCaffery is going to exceed his commitment to lease at least 40% of the development’s spaces to Pittsburgh-area companies. But he adds that his goal is to bring life to the building as quickly as possible.

“Let's make sure it doesn’t ever appear empty,” says McCaffery. “We want to make sure that the building is vibrant. My biggest charge is that Pittsburgh is going to be proud of this building.”

And although McCaffery operates control over the Terminal's future, the company actually signed a 99-year lease with URA on the land the Terminal sits on. This gives the URA some power over the future of the development. After 15 years, the URA can decide to opt out of the lease, or McCaffery has the opportunity to purchase the land from the city.