I know, I know, it’s all about Prince this morning, as it should be. But I hope you recover in time to check out this exceptional production of Annie Baker’s 2015 Pulitzer-winning play. 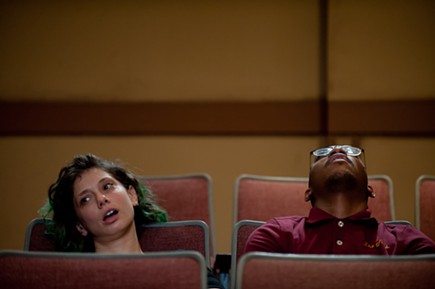 Photo courtesy of Jeff Swensen
Sarah Silk and Saladin White II in "The Flick"
The Flick is a real anomaly that sounds daunting and maybe even shouldn’t work: Who these days writes a low-key three-hour comedy, played on one dingy set, where all three main characters are underpaid dorks and two of them are depressives? And which, as Michelle Pilecki points out in her review for CP, is for long passages so shy on dialogue that it's practically a dance show?

But Baker (whose Circle Mirror Transformation was staged by Pittsburgh Public Theater a few years back) is a virtuoso of the space between words: While Baker has a peerless ear for the inarticulate way people really talk, what isn’t said in this play, set in a rundown small-town movie theater, and for how long it’s not said, is at least as communicative as what is (both between the characters themselves and for the audience).

So Baker loves her silences. But because she therefore gives the cast both nothing and everything to work with, The Flick – I’d call it a discontiguous love triangle, though it’s also more – only works if the director and cast get it. And at The REP they surely do: Robert A. Miller guides an amazing ensemble cast led by Sarah Silk, John Steffenauer and Saladin White II.

Three hours is long, yes. But just bring a snack, and come ready to really watch, and really listen. You won’t be disappointed.