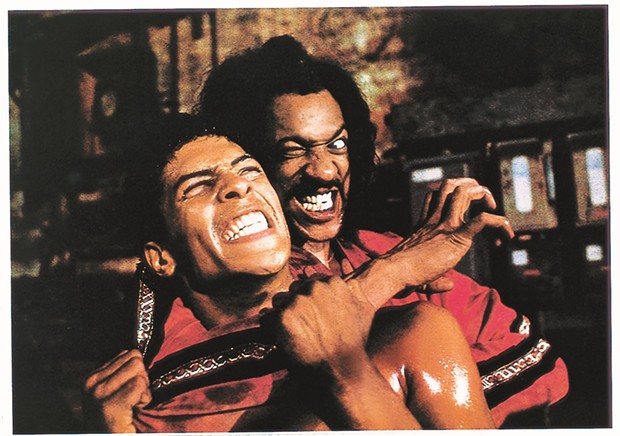 Battle of the Masters in The Last Dragon: Leroy Green (Taimak) and Sho-Nuff (Julius Carry)
"Who is the master?!"
Also, how do I get "The Glow"? And just how big can Vanity's hair get?

Important questions asked — and answered — in the 1985's martial-arts comedy The Last Dragon. The film, long a cult favorite, offers fights, cheesy special effects, groaner puns and even a romance. The film's full title is Berry Gordy's The Last Dragon, so you know the Motown Master packed it with musical performances, too.

Most folks probably came to The Last Dragon via VHS tapes or cable, so here's your chance to see Michael Schultz's masterpiece on the big screen. The film screens 6:30 and 9:30 p.m. Fri., April 22, at the Hollywood Theater, in Dormont. The film's action star, Taimak, will attend both screenings, sign copies of his new book, Taimak:The Last Dragon, and do a Q&A. More info and tickets here.

Prepare your important questions for Taimak now. We got in a few in early, and Taimak graciously answered them via email.

Your fighting preference: fist or foot?
Both

How long does it take to eat a small popcorn using only chopsticks?
Depends how cooperative the kernel is :)

How many headbands were deployed in the making of The Last Dragon?
I don't know, I only wore a hat.

If you could time travel back to New York City 1985, what would you buy?
A VIP ticket to Studio 54

Whatever happened to all those giant boomboxes?
They shrunk.

Besides The Last Dragon, is there a greater martial-arts movie than Enter the Dragon?
I don't know about better, but I love many, like Seven Samurai, Five Deadly Venoms, Shogun's Assassin, Chinatown Kid, Shaolin Soccer, Mad Monkey Kung Fu, 18 Bronze Men ... etc.

Who is the master?
I Am.