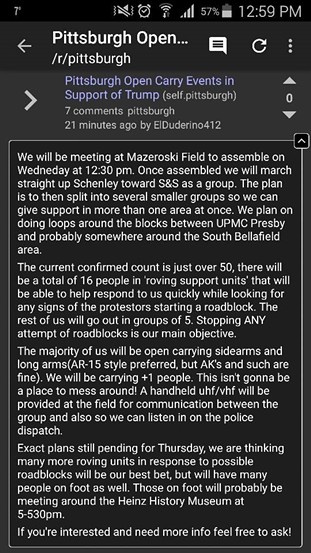 Some Donald Trump supporters appear to be a bit overzealous in the run-up to the Republican Presidential candidate’s visit to Pittsburgh later today.

Yesterday, an open-carry support group posted a message on Reddit saying they would be armed and patrolling outside Trump’s Oakland appearance. The goal was to inhibit potential protesters. Trump is holding a town hall meeting with Fox News’ Sean Hannity  inside the Soldiers and Sailors Memorial Hall at 5:30 p.m. A screenshot sent to City Paper yesterday afternoon details plans for a group of 50 people to patrol in loops armed with guns around Oakland blocks to stop potential protesters from starting roadblocks. The screenshot has since circulated on social media but appears to have been removed from Reddit.

The posts says “the majority of us will us will be open carrying sidearms and long arms (AR-15 style preferred, but AK’s and such are fine)... This isn’t gonna be a place to mess around!” The post also states that the group plans to meet at the Mazeroski Field at 12:30 p.m. and to use two-way radios to communicate.

The group does not identify themselves by name, but the post was found on subreddit page of Pittsburgh Reddit and is entitled “Pittsburgh Open Carry Events in Support of Trump” and was posted around noon yesterday.

“Stopping ANY attempt of roadblocks is our main objective,” wrote a user identified as ElDuderino412.

Pittsburgh’s public safety office issued a statement this morning regarding the posts.

“Pittsburgh Police are aware of and are monitoring various social media commentary and threats regarding the Donald Trump rally today. We will continue to monitor and validate the credibility of these threats throughout the day, and will respond accordingly. As always, our first and primary concern is the safety of the City,” the statement read. “We have developed a robust operational plan to ensure that we are prepared to deal with any emergency situations that might arise during the day and evening. We will be executing that plan with the same crowd management philosophy that we always use, which includes protecting constitutional rights.”

On Tuesday evening, Pitt’s Senior Vice Chancellor Kathy Humphrey issued a statement reading in part:  “We have been informed that there may be a group openly carrying firearms in a demonstration of their commitment to the Second Amendment. Pennsylvania law allows open carry on public property. We expect that these demonstrators, if present, will abide by the law and remain off private property, which includes University of Pittsburgh campus areas. 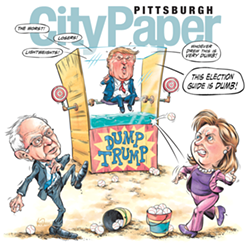 City Paper will be covering Trump's visit today and the surrounding protests. Check for updates on Twitter and Instagram: @pghcitypaper and online at www.pghcitypaper.com. Also check out our election guide for the latest on state and local races as well as Charlie Deitch's piece on the "Five Realities Donald Trump has shown us about America."

Some responses from ElDuderino412 that are still up online include the user threatening potential protesters and mentions of Pennsylvania’s “castle doctrine,” the state’s version of a stand-your-ground law that allows use of deadly force to defend yourself if you feel threatened for your life, serious bodily injury, or kidnapping. (However in Pa., the assailant must be carrying a lethal weapon.)

“I hope any ‘protesters’ who think it might be a good idea to pull some of the crap that we've seen done elsewhere remember Pennsylvania has a castle doctrine,” writes ElDuderino412 in a post yesterday. “I would not hold people against their will with illegal roadblocks or any other tactics.

“People have been paid to intimidate others and cause havoc as a way of protesting Trump… That will NOT happen in Pittsburgh. We are prepared to defend ourself against all attempts at harm or kidnapping (roadblocks for example). Time to show we are taking this country back and no one will stop us!”

Ray Gerard of Occupy Pittsburgh Now, an advocacy newspaper that relaunched recently, sent CP the screenshot of the posting. He says yesterday he and others started circulating plans to hold a protest in front of the Trump event at Soldiers and Sailors Memorial Hall on April 13.

Gerard is not sure how this Open Carry group found out about their plans, but assumes that they used social media to discover the protests. Gerard says he is scared what could happen if gun-rights advocates are considering using force towards protesters. He adds that there is a family-friendly event at Frick Fine Arts building at 2:30.

Even Jim Mann, a local open-carry advocate, thinks ElDuderino412’s plan is too extreme. “I am a firm believer in the Second Amendment in regards to open and voncealed carry,” wrote Mann in a message to CP. “With that being said, I myself would not participate in this kind of event.  I believe this could end badly… This guy sounds like a nut job.”

Mann, who supports Trump and runs a Open Carry forum on Facebook, is critical of  protesters blocking the streets at Trump’s event. He says Trump protesters have been very forceful and believes the Pittsburgh Police need to step up and stop any chaos from occurring.